Last March, over 130 countries joined in long-sought after negotiations for a global treaty ban on nuclear weapons, successfully fending off coercive efforts by the United States and other nuclear-armed states to de-fund and derail the campaign. On May 22, 2017, the language of a “Draft Convention on the Prohibition of Nuclear Weapons,” was delivered to the United Nations for final negotiations taking place from June 15 to July 7 in New York.

Notwithstanding a president who opposes the treaty and who may know less about nuclear weapons than most highschoolers, the vast majority of the world’s people welcome the draft treaty.

Last summer, Donald Trump famously asked, “If we have ‘em [nuclear weapons], why can’t we use ‘em?” although tens of thousands of citizens, along with generals, legal experts, governments, churches, religious leaders and UN resolutions have for decades been explaining exactly why.

At the National Press Club on Feb. 2, 1998, General George Butler, a former commander of US Strategic Air Command, authoritatively answered Mr. Trump: “The likely consequences of nuclear weapons have no politically, militarily or morally acceptable justification.”

Gen. Butler’s famously startling speech was informed by countless books, articles, archives and studies. His experience and reflection led him to say about H-bombs that, “The unbounded wantonness of their effects … transcend time and space, poisoning the earth and deforming its inhabitants for generation upon generation. They leave us wholly without defense, expunge all hope for meaningful survival. They hold in their sway not just the fate of nations but the very meaning of civilization.” The same year, Gen. Butler joined 60 other retired generals and admirals calling for nuclear weapons abolition.

What the military retirees have pointedly left unsaid about nuclear weapons is that their use is illegal according to their own Service Manuals. International law scholars have argued at length, some successfully, that together the manuals and the law of nations make any use of H-bombs a crime. Experts including Peter Weiss, Richard Falk, Ann Fagan Ginger, Francis Boyle, John Burroughs, and Matthew Lippman, etc., movement attorneys like Anabel Dwyer, Bill Durland, Bill Quigley, John Bachman, and Kary Love, etc., thousands of legal rights advocates from former US Attorney General Ramsey Clark and England’s George Delf, to life-long war resister Dave McReynolds, and hundreds of plowshares disarmament activists from Carl Kabat to Angie Zelter, have all made the case.

The language of the new Draft Convention is comprehensive, compelling and even awe-inspiring. It includes the legally unprecedented acknowledgement that women and girls are more seriously harmed by radiation than the rest of the population. The draft’s Preamble says in part:

“Deeply concerned about the catastrophic consequences that would result from any use of nuclear weapons and the consequent need to make every effort to ensure that nuclear weapons are never used again under any circumstances,

“Cognizant that the catastrophic consequences of nuclear weapons transcend national borders, pose grave implications for human survival, the environment, socioeconomic development, the global economy, food security and for the health of future generations, and of the disproportionate impact of ionizing radiation on maternal health and on girls, …” 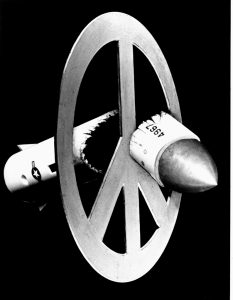 The ban negotiations build on a long history of international treaty development that has challenged the legitimacy of nuclear weapon effects for decades without explicitly outlawing them by name.

In 1907, the Hague Regulations banned the use of poison. Radioactive fallout is poisonous to say the least. Because attacks that are “analogous to gas” warfare are banned by the 1925 Geneva Protocol, nuclear war’s effects, and consequencly any use of them, can be considered illegal. The 1945 Nuremberg Charter, written by US judges, outlaws “planning and preparation” of massacres—a monumental change in treaty law, since it implicates nuclear war planners before their weapons cause mass destruction. Indiscriminate destruction is explicitly forbidden by the 1949 Geneva Conventions.

In 1961, the UN General Assembly adopted Resolution 1653, “Recalling that the use of weapons of mass destruction, causing unnecessary human suffering, was in the past prohibited…” This early UN resolution declared in part:

“The use of nuclear and thermo-nuclear weapons is … a direct violation of the Charter of the United Nations; … would exceed even the scope of war and cause indiscriminate suffering and destruction … and, as such, is contrary to the rules of international law and to the laws of humanity; …. is a war directed not against an enemy or enemies alone but also against mankind [sic] in general, since the peoples of the world not involved in such a war will be subjected to all the evils generated by the use of such weapons; [and] Any State using nuclear and thermonuclear weapons is to be considered as … acting contrary to the laws of humanity and as committing a crime against mankind and civilization…”

In 1996, the UN’s International Court of Justice, or World Court heard arguments from UN Member States on whether the threat or use of nuclear weapons was legal. The judges concluded that “the threat of use of nuclear weapons would generally be contrary to the rules of international law…” The World Court also reminded the world that the 1968 Non-Proliferation Treaty (NPT) requires treaty signers to “bring to a conclusion negotiations leading to nuclear disarmament in all its aspects under strict and effective international control.”

The United Sates ratified the NPT which obligates signatories to “pursue negotiations in good faith on effective measures relating to cessation of the nuclear arms race at an early date and to nuclear disarmament.” [Emphasis added] Forty-nine years later, “an early date” has finally arrived.

The Articles in the new draft treaty declare in part:

Beatrice Fihn, Director of the International Campaign to Abolish Nuclear Weapons, celebrated the progress. “The release of a draft treaty to ban nuclear weapons is a milestone in the decades-long effort to ban these indiscriminate weapons of mass destruction because of their inhumane and catastrophic impacts. Once adopted, the treaty will constitute an important step toward their eventual elimination,” she said.