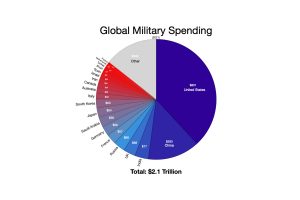 In March, the Biden Administration submitted an $813.3 billion military budget request for fiscal year 2023, $773 billion of which would be allocated to the Pentagon. This figure does not include non-Pentagon military spending outlined below. A total of $50.9 billion of the bill is earmarked for nuclear weapons, with $34.4 billion going to the Department of Defense (DOD), and $16.5 billion going to the National Nuclear Security Administration inside the Department of Energy.

Defense Secretary Lloyd Austin has said that the nuclear weapons budget will be used to “modernize” the so-called nuclear “triad” — nuclear weapons on land-based missiles, warplanes, and submarines. The request included $6.2 billion for the Navy’s Columbia class nuclear missile submarines; about $9.5 billion dollars to be shared among the Air Force’s B-21 “Raider” heavy bomber, the long-range standoff weapons system, and the Sentinel long-range, land-based missile system set to replace today’s Minuteman III missiles.

Despite the significant increases, it does appear that some nuclear weapons programs will be zeroed out. The nuclear-armed, sea-launched cruise missile system appears devoid of funding in the proposed budget. The same fate befalls the 1-megaton B83 gravity bomb — with 66 times the force of the US Army Air Corps’ Hiroshima bomb that promptly killed 140,000 people. Although the previous administration planned a 2025 retirement date, it now appears the B83 will be phased out earlier.

Ultimately, on June 22, the House Appropriations Committee approved a 2023 Pentagon spending bill of $761.681 billion, which is an increase of $32 billion or 4.4%, over fiscal year 2022, and translate to an eye-popping $87 million-per-hour! Military hawks in the Pentagon and Congress promoted the spending increases by catastrophizing Russia’s invasion of Ukraine, manufacturing “domino effect” propaganda about Russia’s imperial goals, and stirring up fears of China’s “modernization.”

As always, tens of billions in additional military spending is hidden in officially “civilian” programs. The 2022 fiscal year included at least another $182 billion of non-Pentagon military spending, specifically in allocations to Homeland Security, NASA, retiree pay and healthcare, the Justice Department, the FBI, the State Department, International Security Assistance, the Treasury, and the Secret Service. In addition, the Washington Post has reported that the CIA’s “black budget” amounted to about $52 billion in 2013, and the military portion of its current budget is unknown. (With a grand total of $995.861 billion for next year, the US military all tolled is set to take in $113 million every hour of every day.)

— Matt Jahnke is a published biologist and Nukewatch volunteer based in Duluth, Minnesota.