The lead paragraph from Reuters was originally correct: “Most, if not all, U.S. nuclear power plants contain counterfeit or fraudulent parts, potentially increasing the risk of a safety failure…” 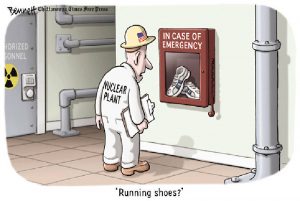 This hair-raising news is just one of the shocking findings in a set of seven reports released February 10 by the US Nuclear Regulatory Commission’s (NRC’s) Office of Inspector General (OIG), now headed by Robert J. Feitel.

Among the findings of the first of the seven reports were: 1. “Counterfeit, fraudulent, and suspect items (CFSI) are present in operating plants”; 2. “The extent of CFSI in operating plants is unknown because the NRC does not usually require licensees to track CFSI” … “if done at all, tracking is voluntary and methods and data quality vary among licensees”; 3. The questionable “termination of [some] rulemaking in 2016 that addressed CFSI oversight concerns”; and 4. “Department of Energy staff identified more than 100 incidents involving CFSI in FY 2021 alone, including 5 incidents involving safety-significant components.”

“Counterfeit parts are safety and security concerns that could have serious consequences in critical power plant equipment required to perform a safety function,” the OIG report says in its understated bureaucratese. And, “According to the Electric Power Research Institute, counterfeit parts have been found in valves, bearings, circuit breakers, pipe fittings, and structural steel, and can be difficult to spot.”

The finding that “most, if not all” of the country’s 94 operating reactors are more dangerous than we thought is potentially so devastating to the environmentally toxic and financially bailed-out nuclear power sector (Reuters said the OIG’s reports are “a blow to a US nuclear industry”), that public relations agents and industry allies in the media must have run headlong to the phones and demanded retractions. Somehow, they were rewarded almost immediately with a so-called “correction” which misstates and weakens the OIG findings — a “correction” that was placed at the beginning of most follow-up reports.

The retraction misleadingly states that it, “Corrects lead paragraph to say many counterfeit parts are in U.S. nuclear plants instead of most, if not all, plants contain counterfeit parts.”

In fact, the report from the OIG — based on confidential testimony from several industry and NRC whistle-blowers — says that “well placed NRC sources” allege that “most, if not all” nuclear reactors operating in the United States today have counterfeit or faulty, substandard parts essential for preventing disasters.

The lead paragraph in The Energy Daily improved on the Reuters report by including the word “operating” before “nuclear plant” — a salient point considering their increased potential for radiation disasters compared to the 23 shuttered units.

The “most, if not all” bombshell follows from the fact, as OIG found, that “the Nuclear Regulatory Commission may be underestimating the number of CFSI in plants and their impact because it does not require licensees [reactor operators] to report CFSI except in extraordinary circumstances” like “the failure of equipment that performs a significant safety function.”

One such fraudulently manufactured, purchased and installed part identified after it failed was a “service water pump shaft” that was found to be counterfeit after if snapped. The loss of cooling water circulation, either inside a reactor vessel, or in the deep pool of ferociously hot waste fuel rods, has caused some of the industry’s worse radiation release disasters.

The depth of deliberate malfeasance or deception by the Nuclear Regulatory Commission is justifiably savaged in the OIG report. The investigation found that NRC staff had for more than 10 years dismissed, ignored and even misfiled so as to hide allegations regarding FCSI. “This investigation revealed that the alleger communicated CFSI concerns to the agency staff via letters, e-mails, phone calls, and discussions at public meetings over 10 years. Most of the alleger’s concerns involved Seabrook Station.”

“… we found that the NRC did not investigate or pursue any substantive actions regarding an alleger’s concerns about the presence of CFSI, nor did the NRC process any of the information provided by the alleger over the last 10 years through its Allegation Review Boards.”

Indeed, the NRC’s Office Allegation Coordinator was found to have classified the alleger’s charges as “non-allegations,” and then kept secret the details of how such a designation is applied. The OIG politely condemned the agency’s action, writing, “Such missing information regarding the NRC’s approach to reviewing allegations could be construed as misleading to the public.”

“The alleger” is a reference to Mr. Stephen J. Comley, Jr., of the national whistle-blower protection organization We the People, in Rowley, Mass. In a February 10 cover letter to Comley accompanying the reports, OIG head Feitel wrote appreciatively, “Thank you for taking considerable time to bring your concerns to the OIG,” and noted that “my staff has completed its investigations” into “your allegations that CFSI are present in most, if not all, U.S. nuclear power plants.…”

Feitel confirmed to Comley that “OIG investigators interviewed several individuals you identified.” They are some of the over two-dozen whistle-blowers who have spoken with We the People, and who are referred to in the OIG reports as “a well-placed NRC principle” or “an NRC source.”

As I reported last October in Steve Comley has for 35 years been haranguing the NRC and its inspectors, demanding that they take the whistle-blowers’ charges seriously. So the OIGs’ damning and alarming February findings (too many to report on in one or two articles) are the long-awaited validation and vindication of Comley’s steadfast work that goes back almost four decades.

Feitel’s letter to Comley speaks to his group’s repeated warnings to the NRC about the impossibility of safely evacuating the Seabrook, New Hampshire reactor site during an emergency, and, beyond this, to the whistle-blowers’ allegations that they as first responders — State Patrol and National Guard forces — have been gag-ordered by state authorities not to discuss the endangerment caused by the lack of a feasible evacuation plan. (Nuclear reactors are the only industrial operations required to earn the approval of an emergency evacuation plan prior to startup.)

“The OIG also investigated your allegation that Seabrook Station’s evacuation plan is inadequate,” Feitel wrote. This report is complete, but a response from the NRC is pending, and only after the response is filed with OIG can the public “request a copy of the report via the Freedom of Information Act,” Feitel advised.

For now, the NRC can continue to hide behind its PR hacks that manage major news services with bald-faced lies. An NRC Public Affairs Officer named Scott Burnell told Reuters, “Nothing in the report suggests an immediate safety concern.” And Burnell has a point. The report doesn’t “suggest” anything. While using more polite language then me, it directly condemns the deceitful, bogus, unscrupulous, immoral, deceptive, dodgy, and duplicitous chicanery of the Nuclear Regulatory Commission when dealing with its own whistle-blowers, and warns against the reckless endangerment of operating counterfeit, substandard nuclear power reactors.