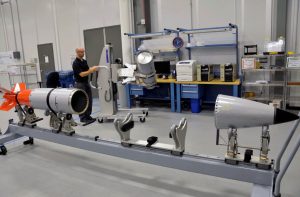 At center, the device holding the middle section of this B61-12 nuclear bomb was designed to allow technicians to safely move around different parts of the bomb without using hoists. Senior Mechanical Engineer Jeremy McCord at the Energy Department’s National Security Campus outside Kansas City designed and built this Assembly Tooling Lifting Alignment System, or “ATLAS.” Photo by Dan Sagalyn

In January 2014, the Obama administration approved and Congress fully funded development and production of a new nuclear warhead — under a program dubbed “life extension” — known as B61-12.

The new device is a so-called “variable yield” thermonuclear bomb, and is designed to have four separate explosive yields, to be chosen like from a menu: 0.3 kilotons (kt); 1.5 kt; 10 kt; and 50 kt.[2] The dial-a-massacre weapon can burn with between 50 and 83 times the destructive power of the Hiroshima bomb that turned 140,000 people into powder and ash. Yet in the cold blooded jargon of nuclear war planners the B61-12 is known as “low-yield.” Business writer Jeremy Bender called it “tiny”![3]

With a projected cost of $12.2 billion the B61-12 may be the most expensive nuclear bomb in history. At about $25 million apiece, and weighing 700 pounds, each bomb will cost more than if it were made of solid gold ($14.6 million).

According to the Bulletin of the Atomic Scientists, 300 of the current 820 B61s are kept at bases with B61-capable aircraft, “including 184 B61s deployed in Europe.” About 250 B61-7 and 50 B61-11 bombs are stored at Whiteman Air Force Base in Missouri and at Kirtland Air Force Base in New Mexico.

Now in just an engineering phase, the first production of B61-12s could begin in 2022. Altogether about 480 may be built.

“One NATO exercise in 1962 estimated that 10 to 15 million German civilians would be killed in a tactical nuclear exchange,” Foreign Affairs reported.[4] The self-destructiveness of such war plans helps explain why the US European Command gave up “advocating for maintaining nuclear weapons in Europe,” the authors said. EUCOM leaders told an oversight task force in 2008 there would be “no military downside to the unilateral withdrawal of nuclear weapons from Europe.” They noted that, “prominent critics … have long argued that the military rationale for keeping nuclear weapons in Europe is an anachronism.”

Opposition to the B61s and their replacement is gaining strength in the US and Europe where high-level politicians have called them “militarily useless.” Gen. James Cartwright, former Vice Chair of the Joint Chiefs of Staff, called the B61s “redundant,” and Gen. Colin Powell favored eliminating them in the 1990s when he was Chair of the Joint Chiefs.[5] In 2013, Senator Dianne Feinstein, and Representatives Mike Quigley and Jared Polis tried to curtail the B61-12 program. In 2010, five NATO partners — Belgium, Germany, Luxembourg, Holland and Norway — asked that the B61s be permanently removed from Europe.

In its 2012 Posture Review, NATO’s 28 ministers pledged to work for a world without nuclear weapons. In Germany, thanks to widespread protest and education) every major political party has formally called for withdrawal of the B61s. In one widely published article, former NATO Secretary-General Willy Claes and three senior Belgian politicians wrote, “US tactical nuclear weapons in Europe have lost all military importance.”

Germany’s Der Spiegel online reported Dec. 9, 2016: “By be-coming a signatory to the Non-Proliferation Treaty in 1975, the Germans committed ‘not to receive the transfer of nuclear weapons or other nuclear explosive devices or of control over such weapons or explosive devices directly, or indirectly.’ During negotiations over German reunification in 1990, then-Chancellor Kohl also affirmed Germany’s ‘renunciation’ of the manufacture, possession and control of nuclear weapons.” — John LaForge
_____