The Nuclear Regulatory Commission’s (NRC) Office of Inspector General (OIG) has confirmed that it is investigating allegations that counterfeit, substandard parts are currently being used in scores of nuclear reactors across the United States, and further that emergency responders in New Hampshire’s National Guard and the Massachusetts State Police have been gagged by orders not to reveal that it is impossible to conduct a safe evacuation of the Seabrook reactor during an emergency. The use of bogus equipment inside operating reactors, and a failed evacuation during a reactor accident raise both the chances and the consequences of a major reactor disaster across the country and particularly at Seabrook, located on the New Hampshire seacoast 40 miles north of Boston. 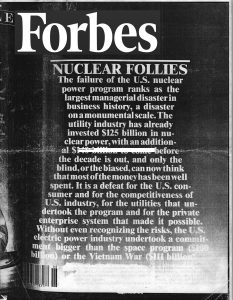 In a January 15, 2021 email to We the People — a whistle-blower protection group in Rowley, Mass. — the OIG’s Deputy Assistant Inspector General for Investigations Malion Bartley wrote that his office “has an open investigation and is reviewing the concerns you provided and your supporting documents.” Bartley’s email, made public only recently, follows a December 14, 2020 letter in which Bartley confirmed, “The Office of the Inspector General, US Nuclear Regulatory Commission, is reviewing your allegation regarding counterfeit and substitute parts in nuclear plants around the United States.”

For over 35 years We the People has demanded an investigation into whistle-blower declarations that reactor manufacturers have installed counterfeit, substandard parts in reactors across the United States. The allegations are based on tape recorded conversations with several nuclear industry and NRC whistle-blowers.

Municipalities near Seabrook are also demanding answers. Mayor Kassandra Gove of Amesbury, Mass., ten miles from the Seabrook reactor, wrote this past August 27 to the NRC’s Inspector General Robert Feitel reminding him, “the City has previously asked for a public hearing by the NRC on the public safety and evacuation plan for Seabrook Station,” and further that “The NRC should seek to ensure both the safety of … the parts being used within the facility itself, as well as the evacuation plans in the case of a catastrophic event.”

Mr. Bartley’s December 14, 2020 letter insists that We the People provide the OIG with personal contact information for the whistle-blowers who are being protected by the nonprofit group. The inside informers have divulged to the group’s director, Stephen Comley, Sr., the sorts and locations of the fake parts that he alleges currently endanger the operations of the entire fleet of nuclear reactors in the United States.

Comley has replied to the Inspector General’s office that because protection of the nuclear whistle-blowers is paramount, he needs guarantees from the NRC and OIG that no retaliation will be taken against them. We the People has refused to reveal any whistleblower’s identity to the OIG unless the courageous informants give their permission.

The OIG’s Senior Special Agent William Johnson wrote an email to We the People on December 17, 2020, complaining that his office was “disappointed that you are choosing not to provide said requested information unless certain conditions you insist upon are met by our office.”

The Christian Science Monitor reported in July 1994 that the NRC regularly retaliated against agency whistle-blowers who warned of unsafe operations.  “NRC officials were turning over whistle-blowers’ identities to one of the nation’s largest utilities, the Tennessee Valley Authority” in violation of federal policy, the Monitor reported. The article, written as a result of a tip from We the People, noted that whistle-blowers “are a major source of vital information about safety risks at nuclear power stations” and that “the NRC is frequently charged by safety advocates with being too cozy with the multibillion-dollar nuclear industry.”

On Sept. 13, 2021 Special Agent Johnson again wrote in an email to Comley, “Please forward to the OIG the contact information for these additional state troopers that you say you spoke with. … They are in law enforcement, and the NRC OIG is a law enforcement agency. We can be trusted.” After sharing his agency contact information, Johnson wrote, “I look forward to talking to these other state troopers who will confirm your allegation that no safe evacuation of Seabrook Station would be possible in an emergency.”

Nuclear watchdogs and We the People are waiting to hear whether the whistle-blowers’ precautionary guarantees — insuring their anonymity and personal security — will be granted by the OIG. ###