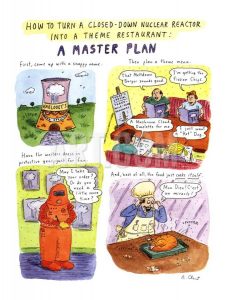 Last month, the La Crosse Boiling Water Reactor, on the banks of the Mississippi River in Wisconsin, was found to be leaking radioactive tritium (the radioactive form of hydrogen) into the groundwater.

The La Crosse Tribune reported on March 14 that the company LaCrosseSolutions (a subsidiary of Utah-based EnergySolutions) reported a reading of 24,200 “picocurie”-per-liter in water taken from a monitoring well on Feb. 1. The US Environmental Protection Agency allows up to 20,000 picocuries-per-liter tritium in drinking water.

The EPA estimates that seven of 200,000 people who drink such water would develop cancer. So the nuclear industry has somehow earned a government license to kill, if you will. But, hey, 24,200 picocuries per-liter isn’t that much over the allowable cancer rate.

LaCrosseSolutions is working an $85 million contract to “decommission” the La Crosse reactor. The small water boiler was shut down in 1987, 31 years ago, but damn if it isn’t still trashing the environment. You gotta hand it to the long reach of the nuclear industry: It keeps on poisoning even three decades after going of business.

The Dairyland Power Coop isn’t alone in its despoiling of the Earth. (The coop ran the reactor from 1967 to ’87, and then transferred its license to LaCrosseSolutions in 2016.) In June 2011, Jeff Donn’s four-part, year-long investigation for the Associated Press reported that tritium leaks were found at 48 of 75 US reactor sites, three-quarters of the country’s commercial reactor operations, “often from corroded, buried piping.”

La Crosse’s reactor-borne tritium in the groundwater is a danger to everyone drinking it, but the Tribune news report noted, “[T]he monitoring well was just 25 feet below the surface and not used for human consumption.” This should come as a great relief to anyone in the area using well water that’s not been tested.

Operating reactors also spew tritium from stacks in the form of tritiated water vapor. This can produce radioactive rainfall “which can contaminate surface water bodies as well as groundwater,” according to Annie and Arjun Makhijani of the Institute for Energy and Environmental Research. But since the La Crosse reactor has ceased operations, its legacy is poisoned ground, contaminated and corroded pipes, and leaked tritium in the ground.

The US Nuclear Regulatory Commission announced on March 26, 2018 that in February 2017 LaCrosseSolutions had spilled 400 gallons of radioactively contaminated water directly into the Mississippi River. The NRC announcement also noted that there was a risk to public health from the spill, although the way the La Crosse Tribune reported it was: “The Nuclear Regulatory Commission says there was little risk to public health.”

The NRC determined that the spill of waste water containing the deadly isotope cesium-137 was a violation of federal regulations, one of three low-level violations identified in its annual inspection of decommissioning being done by LaCrosseSolutions.

An analysis found cesium-137 in water samples at concentrations that exceed the federal limits, the La Crosse Tribune reported. The NRC did not issue a citation but found LaCrosseSolutions had violated NRC policy.

The Tribune’s reporter Chris Hubbuch called up Professor Jeff Bryan who teaches chemistry at the University of Wisconsin-LaCrosse. Prof. Bryan said, “Potential exposure to ionizing radiation [from drinking contaminated water] was very low, about 1/100th the exposure for an hour on a commercial flight.”

This “apples and tires” comparison is not just useless, it deliberately misinforms readers who might think voluntary external exposure to cosmic radiation inside planes is no different from internal, involuntary radiation exposure from drinking water contaminated with cesium-137.

I wrote to the good professor and asked him if people on commercial flights are exposed to cesium-137. He didn’t reply. (They are not.) I asked if there is any internal cesium exposure on a commercial flight. Again, no answer. (There is none.)

Prof. Bryan told the newspaper what he thought about LaCrosseSolutions’ cesium spill into the Mississippi: “This was a really dumb accident. Stupid, but not hazardous.”

The National Academy of Sciences does not agree with Prof. Bryan. The NAS’s most recent report on the subject (known as BEIR VII) concluded that every exposure to radiation produces a corresponding cancer risk. There is no such thing, Professor Bryan, as radioactive pollution that is not hazardous.