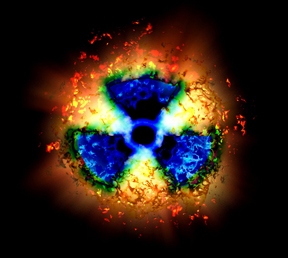 Nuclear Power Dead in the Water it Poisoned

On Feb. 11, 1985, the cover page of Forbes thundered, “The failure of the U.S. nuclear power program ranks as the largest managerial disaster in business history, a disaster on a monumental scale.…”

So how is it that Congressional representatives, TV network pundits, FOX ditto heads and even CNN program directors still promote nuclear power?

Part of the answer comes from American University researcher Judy Pasternak and her students. According to Pasternak’s 2010 study, the nuclear industry spent $645 million over 10 years lobbying Capitol Hill, and another $63 million in campaign contributions over the same period. Between 1999 and 2008, these millions manufactured the canard that nuclear power is “carbon free,” “clean” and can “help fend off climate change.” Prior to this spending blitz, the US nuclear power program was, because of the shock of accidents at Three Mile Island in 1979 and Chernobyl in 1986, “pretty well dead in the water” — in the words of economist and author Jeremy Rifkin. …

Nuclear Power Too Expensive, Too Dangerous

Lofty claims about the benefits of nuclear power have been coming from the Nuclear Energy Institute’s lobbyists and others. Yet news journals, financial journals and energy journals all make clear that boiling water with uranium is the costliest and dirtiest energy choice.

Even Time magazine reported, on Dec. 31, 2008, that, “New [reactors] would be not just extremely expensive but spectacularly expensive.”

Florida Power and Light’s recent estimate for a two-reactor system was a shocking $12 billion to $18 billion. The Wall Street Journal reported on nuclear’s prospects on May 12, 2008, finding that, “The projected cost is causing some sticker shock [and is] double to quadruple earlier rough estimates.”

No less than Jeffrey Immelt, CEO of General Electric, one of the world’s richest nuclear engineering firms, discouraged new reactor construction because of financial liabilities. In the Nov. 18, 2007, LondonFinancial Times, Immelt said, “If you were a utility CEO and looked at your world today, you would just do gas and wind. You would say [they are] easier to site, digestible [and] I don’t have to bet my company on any of this stuff. You would never do nuclear. The economics are overwhelming.”

The estimates never even include the cost of managing radioactive waste, a bill that keeps coming for centuries. The New York Times reported five years ago that the owners of nearly half the reactors in the U.S. “are not reserving enough money to decommission them on retirement.” The newspaper’s sources were Congressional auditors, who also said the Nuclear Regulatory Commission (NRC) was not tracking the money carefully.

Nuclear is so dirty Germany legislated a national phase-out of its 17 reactors by 2025. That 1998 decision was based partly on government studies that found high rates of childhood leukemia in areas near German reactors. In July 2007 the European Journal of Cancer Care published a similar report by Dr. Peter Baker of the Medical University of South Carolina that found elevated leukemia incidence in children near U.S. reactors.

U.S. Rep. Ed Markey, D-Mass., complained to the Nuclear Regulatory Commission in 2005: “The nuclear industry and the NRC have automatically dismissed all studies that link increased cancer risk to exposure to low levels of radiation. The NRC needs to study — not summarily dismiss — the connection between serious health risks and radiation released from nuclear reactors.”

The Oxford Research Group’s 2007 study, “Too Hot to Handle,” called the hope of quickly building new reactors a “pipe dream.” In his 2008 book, Carbon-Free and Nuclear-Free: A Roadmap for U.S. Energy Policy, Dr. Arjun Makhijani, president of the Institute for Energy and Environmental Research, said, “Even the leaders of the nuclear industry have said that they will not build new plants without 100 percent federal loan guarantees.”

Lester Brown, president of the Earth Policy Institute, wrote “The Flawed Economics of Nuclear Power” in 2008, noting, “While little private capital is going into nuclear power, investors are pouring tens of billions of dollars into wind farms each year. And while the world’s nuclear-generating capacity is estimated to expand by only 1,000 megawatts this year, wind-generating capacity will likely grow by 30,000 megawatts.”

The Washington Post reported less than two months ago that “leading environmental figures, including former Vice President Al Gore, remain skeptical of nuclear’s promise.” That’s due to the high cost of construction and the threat of nuclear-weapons proliferation. Leading security and big-business figures are skeptical for similar reasons.

The U.S. Commission on the Prevention of Weapons of Mass Destruction Proliferation and Terrorism has called for ending subsidies that would expand nuclear power. In its Oct. 21 report, “The Clock Is Ticking,” the commission recommended that the “U.S. … work internationally toward strengthening the non-proliferation regime … discouraging, to the extent possible, the use of financial incentives in the promotion of civil nuclear power.”

Nuclear power’s pollution burden already is carried by the public. This is bailout enough. The industry should not also be allowed to unload on us its overwhelming financial risks.

— John LaForge of Luck, Wis., is a staff member for the independent action group Nukewatch and edits its quarterly newsletter.