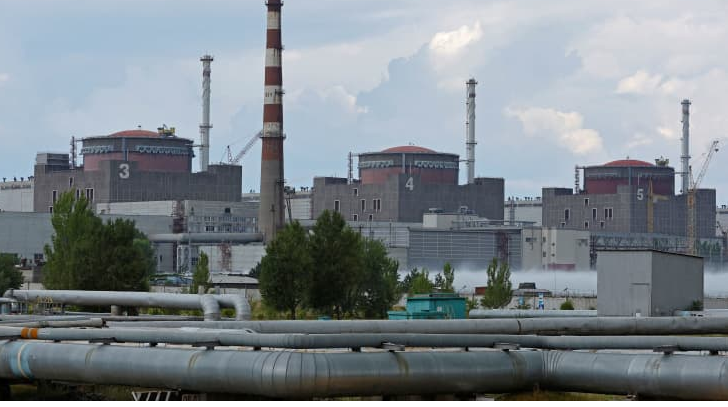 The risk of catastrophic radiation releases is in the news again. Today it’s not because of the frequently recurring earthquakes jolting the site of three simultaneous reactor meltdowns at Fukushima-Daiichi, in northeast Japan. This year’s radiation risk focus is the shooting war in Ukraine, a country with 15 operational nuclear reactors, and in particular the Zaporizhzhia complex in the city of Enerhodar. The site has six large reactors lined up like dominoes, and hundreds of tons of thermally hot and ferociously radioactive waste that must be continuously cooled in huge, engineered pools on site. As of September 15, all six reactors have been put to cold shut down for a multitude of reasons, but their hot cores and hot waste systems all still require millions of gallons of cooling water every day.

Shrouding the risks of reactor meltdowns in a cloud of grim apprehension are thinly veiled threats of attacks using nuclear weapons by Russia and NATO. Major news services repeatedly showcase supposed nuclear weapons threats hinted at by Russian authorities, while NATO’s and the United States’ official and long-standing threat of nuclear first-use — and their stationing of US nuclear bombs in five European NATO states — doesn’t warrant a mention. The risk of nuclear weapons detonations is said to be as high as it was during the Cuban Missile Crisis, but this is due as much to NATO’s threatening “Strategic Concept” declaration of June 29 as to anything President Vladimir Putin of Russia has said.

News reports repeatedly claim that the Zaporizhzhia reactor complex—which is on the Dnieper River and close to the fighting in the south—is being shelled and rocketed by both Russian and Ukrainian forces. CNN reported August 18: “Kyiv has repeatedly accused Russian forces of storing heavy weaponry inside the complex and using it as cover to launch attacks, knowing that Ukraine can’t return fire without risking hitting one of the six reactors. Moscow, meanwhile, has claimed Ukrainian troops are targeting the site. Both sides have tried to point the finger at the other for threatening nuclear terrorism.”

However, this “both” sounds like an absurdity, since Russian troops surrounded the vast complex soon after invading, and seized it in March. These occupying Russian forces have kept the reactor site running using its Ukrainian engineers. For Russia to attack the site would be to fire on its own personnel, endanger the operating technicians, and risk catastrophe. As such, news reports that Russia is firing on the complex appear to be disinformation or propaganda.

The Mayor of Enerhodar on August 31 again accused Russia of doing the shelling, but the head of the International Atomic Energy Agency, Rafael Grossi, said during his visit there the next day, “We don’t have the elements to assess that.” What’s more likely is that the Russians are using the huge reactor site as a safe area, amassing equipment and munitions on the sprawling compound, as CNN noted.

Greg Mello, executive director of the Los Alamos Study Group in New Mexico, asserted August 14, “It is not difficult to figure out who is shooting at this power plant, and the dam, and hydroelectric facility on the Dnieper [River], which are necessary for its operation and safety even in a shutdown condition.” With Ukraine forces shelling the area on a regular basis, there is an ongoing chance that munitions aimed at Russian forces surrounding the site could strike one of the reactors, one of its high-level waste storage units, or power lines that supply the site with electricity to circulate cooling water.

Robert Mardini, the head of the International Committee of the Red Cross, told The Guardian, “The slightest miscalculation could trigger devastation we will regret for decades,” adding that the stakes were “immense … When hazardous sites become battlegrounds, the consequences for millions of people and the environment can be catastrophic and last many years.”

In this context, Reuters news agency reported Sept. 1, “Russia’s defense ministry said up to 60 Ukrainian troops had crossed the Dnieper in boats at 6:00 a.m. local time, in what it said was a ‘provocation’ aimed at disrupting the IAEA visit’ referring to an International Atomic Energy Agency delegation. It said ‘measures had been taken’ to destroy the opposing troops.” Reuters could not verify those reports.

Additional risks were highlighted the week of August 25, when wildfires knocked out electric power to the complex. Energoatom, Ukraine’s state nuclear reactor agency, said fires at a nearby thermal power plant caused the reactor complex’s last remaining electric power line to disconnect twice. The site’s three other lines were “lost earlier during the conflict,” the agency said, according to CNN, and the cut-off caused emergency diesel electric generators to start up in order to keep cooling water circulating, preventing potentially disastrous overheating and even reactor and/or fuel pool meltdown(s).

Electricity was restored to the site the next day, but the shutoff terrified observers who were reminded that massive radiation releases can be caused by a power outage — like the station blackout and destroyed backup generators that caused three meltdowns in Fukushima.

Russia’s invasion is doubtless an international crime under the UN Charter, and the Hague and Geneva Conventions. The world has justifiably condemned it, as it recalls the thundering denunciation of the International Military Tribunal at Nuremberg which declared: “To initiate a war of aggression … is not only an international crime; it is the supreme international crime, differing only from other war crimes in that it contains within itself the accumulated evil of the whole.” Of course this applies as well to NATO’s and the United States’ supremely criminal wars of aggression against Afghanistan, Iraq, Libya, Syria, Somalia, Panama, Laos, Cambodia, and Vietnam.

Russia’s February 24 invasion of Ukraine is the first bombardment and invasion of a country with operational nuclear power reactors. For the global anti-nuclear movement — whose teachers, scientists, physicians, and parliamentarians have warned that reactors are sitting-duck dirty bombs, perpetually threatening major radiation releases — its worst-case scenario of deadly risks have been realized, foisted upon the world in an enormously dangerous powder keg we can call “nuclear Russian roulette.” The US role so far has been to play “weapons testing trade show host,” offering over $40 billion in weapons, artillery, ammunition, military training, logistics, and satellite-aided intelligence to enrich our arms merchants and throw gas on the burning roulette table.

The tragic irony of war zone nuclear targets in Ukraine is the country’s zealous embrace of nuclear power on one hand, and its horrifying, ongoing experience of Chernobyl on the other. Chernobyl’s 1986 unit 4 reactor explosions, 40-day graphite fire, and hemisphere-wide radioactive fallout have killed between half-a-million and 900,000 people. In a world not turned upside-down, Ukrainians would be the last people on Earth to risk damaging nuclear reactors.