On January 22, FirstEnergy Corporation announced that its faulty and nearly-self-destructed Davis-Besse power reactor east of Toledo, Ohio, will be closed well before its license expires. However, the shutdown is not because the reactor represents reckless endangerment of public health and safety and should have been closed by the Nuclear Regulatory Commission. FirstEnergy was fine with spinning the loaded gun. No, the old rattle trap can’t cover its costs any more, not with the electricity market dominated by cheaper natural gas, wind, and solar.

Davis-Besse’s shutdown date has not been announced, but CFO James Pearson of FirstEnergy Nuclear Operating Co., the corporate division in charge of the wreck, said it will close if lawmakers don’t approve a taxpayer bailout.

FirstEnergy had said the financial sky was falling in March 2017. Chief nuclear officer Sam Belcher [his real name] told the Toldeo Blade then — as the firm was floating the bailout measure (SB 128) through the Ohio legislature — “In the absence of something happening, [taxpayer-funded handout to the private, investor-owned firm] we’re going to have to make some tough decisions.” So far, state lawmakers have refused to save the decrepit reactor with state taxes. They cite old-fashioned market competition, and the failure of previous subsidies to save the mature, well-established reactor industry once led by the now bankrupt Westinghouse.

Serious accidents at David-Besse in 1977, 1985, 1998, and 2002 endangered its neighbors. The most hair-raising was the discovery in 2002 that corrosion had eaten through more than 6-inches of the reactor head’s carbon steel. The corrosion went undetected by federal and company inspectors for decades. Having gouged a hole in the reactor cover the size of a football, the corrosion left only 3⁄8 inch of steel holding back the high-pressure coolant. A break would have caused a massive loss-of-coolant accident and out-of-control overheating, resulting in catastrophic uranium fuel melting (known as a “meltdown”) and massive radiation releases. 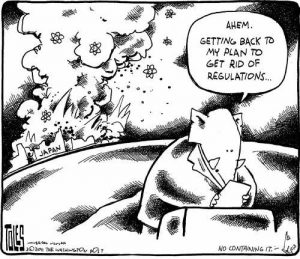 Repairs took two years and cost $600 million, during which the Department of Justice penalized FirstEnergy over operating and reporting violations. FirstEnergy paid $28 million in fines. Yet the NRC allowed the company to restart David-Besse in 2004, and then to run the rust bucket for 40 reckless years, even after the company tacked on another $600 million in repairs in 2014.

Reactors Shuttered by Bankruptcy or Accident Risk from Calif. to New Jersey

Elsewhere in nuclear power’s long “goodbye,” California utility regulators decided this January 11 not to save Pacific Gas and Electric Co. (PG&E) from cheap gas, solar and wind, but to close the company’s two reactors at Diablo Canyon as early as 2020. Unlike the bribe-happy legislatures in New York and Illinois, nuclear power defenders were unable to convince California state law makers to fund a bail out of PG&E.

In 2013, Southern Calif. Edison, owners of the San Onofre reactors north of San Diego, abruptly decided to close them. Reactors 2 and 3 have been churning out high-level radioactive waste since 1983 and 1984 respectively. The hulks ran into trouble when massive repairs and upgrades failed inspections. In May that year, US Sen. Barbara Boxer said that the reactors were “unsafe and posed a danger to the 8 million people living within 50 miles. Boxer even called for a criminal investigation into Edison’s installation of faulty replacement steam generators.

The list of old age reactors shut down or closing soon keeps growing. Kewaunee in Wisconsin was shut in 2013, Vermont Yankee in 2014, and Fort Calhoun in Nebraska in 2016. Oyster Creek* in New Jersey will close at the end of this year, and Pilgrim* in Massachusetts will close in 2019 or sooner. Indian Point’s 1 and 2 near New York City will be shuttered by 2021. Exelon Corp’s FitzPatrick* near Oswego, New York, FE Ginna in Ontario, NY and its nearby Nine Mile Point* were all set to close in 2017, before the state legislature agreed to a $7.6 billion bailout. (This bailout law is being challenged in court by Nuclear Information and Resource Service whose lawsuit has survived its first motion to dismiss.) Exelon’s Clinton and Quad Cities* reactors in Illinois, might have shut down last year too, except for a state taxpayer bailout worth $3.5 billion adopted in 2016.

New reactor construction is being thwarted by similarly exorbitant costs. In 2016, two unfinished Bellefonte reactors in northern Alabama were cancelled. The two V.C. Summer reactors that were almost 40% complete in South Carolina were cancelled last July by its owners after the industry-shocking bankruptcy of the projects’ lead contractor Westinghouse Electric.

Next among dozens of shaky reactors on the chopping block, Xcel Energy’s 43-year-old Monticello* unit on the Mississippi River in Minnesota looks vulnerable, especially in view of a string of notorious accidents.

* These units are elderly clones of the General Electric “Mark I” reactors that caused a triple melt-down at Fukushima in Japan which began in March 2011 and continues to spread radiation to the atmosphere and to the Pacific Ocean. — John LaForge