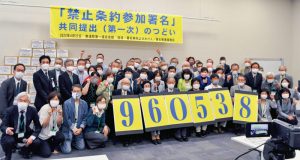 On Earth Day, April 22, a coalition coordinated by the Japan Council Against A and H Bombs submitted petitions to Japan’s Foreign Ministry with 960,538 signatures urging the government to sign and ratify the Treaty on the Prohibition of Nuclear Weapons. Several prominent members of the campaign used the petition delivery ceremony, pictured, to condemn Japan’s recent promotion of “nuclear sharing” and “enemy base attack capability.”

The U.S. Air Force reported its first successful “hypersonic” missile test, overseen by Edwards Air Force Base in northern California on May 14th. After the potentially nuclear-armed missile, dubbed “Air-Launched Rapid Response Weapon” (ARRW), was launched from a B-52 bomber, its “booster ignited … achieving a speed five times the speed of sound” [about 3,835 mph], according to the Air Force. Russia and China have reportedly tested similar ultra-fast weapons. “U.S. defense officials have said that Russia has used hypersonic weapons an estimated 10 to 12 times in its invasion of Ukraine,” according to CBS News, and Democracy Now reported that Russian President Putin confirmed the report. Because of its speed and maneuverability, the ARRW is hard to follow or obstruct. But in a statement to Congress, General Mark Milley, Chairman of the Joint Chiefs of Staff, couldn’t identify any other benefits that the weapon offers. “We are not seeing really significant or game-changing effects to date with the delivery of the small number of hypersonics that the Russians have used,” Milley said, according to CBS. — Reuters, CBS News, May 16, 2022 and Democracy Now, May 19, 2022

Troubles continue to plague the Waste Isolation Pilot Plant (WIPP), a deep burial site carved out of an ancient salt formation half a mile beneath Carlsbad, New Mexico. Workers had to hastily leave the above-ground facilities April 9, 2022, when radioactive liquid was found inside an outer shipping container. WIPP officials announced before an investigation had even begun that there was “no risk of radiological release and there is no risk to the public or the environment.” The 2,000-foot deep waste dump scheme has been excavated for burial of plutonium-contaminated radioactive waste from nuclear weapons production. The Energy Department (DOE) says the waste is “mostly clothing, gloves, lab coats, tools and other debris” from the Cold War, raising questions about the presence of liquid involved in the contamination accident.

The site hasn’t fully recovered from a February 2014 accident — when a waste barrel burst and spewed contamination throughout the whole complex — and now the dump must contend with yet another accident. WIPP was closed for several years after the 2014 barrel explosion in which a drum “self-heated” to almost 1,600 degrees, ripped open and scattered uranium, plutonium, and americium throughout the underground burial rooms, the whole ventilation shaft, and the above-ground buildings. At the surface, 22 workers were internally contaminated after inhaling the radioactive poisons, and independent monitors recorded radiation a half-mile away. Construction of a new ventilation system, three years behind schedule, and costing up to $486 million, still prevents employees from fully utilizing the site. The (DOE) investigation of the April contamination is ongoing. — Carlsbad Current-Argus, Apr 14;  Cortez, Colo. Journal, Apr 11, 2022; AP, April 11 & March 15, 2022; New Mexican, Apr. 23, 2015; Albuquerque Journal, Aug. 23, 2015; New York Times, May 31, & Oct. 30, 2014

Austin Master Services (AMS) is a radioactive waste management firm with offices in Martins Ferry, Ohio. The grassroots group Concerned Ohio River Residents (CORR) sent soil samples from around the firm’s site to a laboratory for tests that found radium-226 over ten times normal background levels. Radium-226 persists in the environment for 16,000 years. Results for lead-214 and bismuth-214 showed radioactivity also “approaching or exceeding regulatory limits,” said Beverly Reed of CORR. The lab analysis showed the hottest radioactivity near the firm’s entrance. AMS, with operations in ten states, handles and transports materials largely from oil and gas industry projects like fracking. While AMS operates without regulation by the Ohio Department of Natural Resources (ODNR), the agency insists some of its waste must be shipped to Utah because it’s too radioactive for regular state landfills. The AMS site, about 2,500 feet from a school stadium and a regional hospital, and several hundred feet from a water plant and homes, sits above the public drinking water aquifer and within a flood plain. In 2014, AMS relocated to Martins Ferry from Youngstown, Ohio after Fire Chief Silverio Caggiano opened an investigation into its facility. When approached by news station WTRF in April, Martins Ferry Mayor John Davies said, “I believe [CORR is] spreading mistruths… I drink the water every day. My kids drink it. My grandkids drink it.” CORR stands by its scientific findings and warns of the contamination’s threat to groundwater. The group hopes the ODNR will halt AMS’s operations and that the U.S. Environmental Protection Agency will name the area as a Superfund site to encourage clean-up. — CORR Original Documents; WTRF-TV, Apr. 6; The Times Leader, May 19, 2022; and AustinMasterServices.com

The Guardian reports that bunkers at Britain’s Lakenheath Air Base, operated by the United States, are being refurbished “to be used again after 14 years to house U.S. nuclear weapons,” according to Pentagon defense documents unearthed by Hans Kristensen of the Federation of American Scientists. U.S. nuclear weapons like the B61 gravity H-bombs in five European NATO states were withdrawn from Britain in 2008 after massive protests. “At the time of the withdrawal, gravity bombs were widely considered militarily obsolete, and hopes of further disarmament by the nuclear-armed powers were high,” the Guardian reported. With the new B61-model 12 now in production, the United States plans to replace over 100 B61-3 and -4 models now in Europe. The 1970 Nonproliferation Treaty prohibits any such sharing of nuclear weapons. Peace activists protested the reported return of U.S. nuclear weapons May 21 at Lakenheath, and the group Stop the War’s Chris Nineham “reminded the crowd that it was people power that forced nuclear missiles to be removed from Lakenheath in 2008” Popular Resistance reported. “It is because of what ordinary people did — what you did — and we can do it all again,” Nineham said.
— Popular Resistance, May 22; The Guardian, Apr. 12; and Federation of American Scientists, April 11, 2022

Jaroslaw Kaczynski, leader of Poland’s ruling right-wing Law and Justice Party, said April 3 that he “might be open” to the stationing of U.S. nuclear weapons in Poland, in spite of prohibitions enshrined in the Nonproliferation Treaty (NPT) that explicitly forbid it. “If the Americans asked us to store American nuclear weapons in Poland, we would be open to it,” Kaczynski told the German Sunday paper Welt Am Sonntag. “The initiative would have to come from the Americans. In principle, however, it makes sense to extend nuclear weapons sharing to the eastern flank,” Kaczynski said, according to Newsweek. Both Poland and the United States are signatories to the NPT. — New York Post, April 4; and Newsweek, April 3, 2022

Protest and Resistance Continues in Germany

This year’s International Week gathering, focused on the U.S. nuclear weapons stationed at Büchel air base in southeast Germany, is set for July 11 to 17. Peace activists from Germany, the U.S., Holland, and elswhere will also travel north to Nörvenich Air Base where Tornado jet fighters from Büchel will temporarily be stationed while their home base runway is refurbished. The Büchel base’s bunkers that hold U.S. nuclear gravity bombs are also being rebuilt to handle the delivery of the new B61-model 12 bombs now in production.

Meanwhile, nuclear weapons abolitionists continue to appear in court for go-in actions resulting in trespass charges. Susan Crane of the Redwood City California Catholic Worker will appear for an appeal hearing in Koblenz Regional Court September 20, as she is contesting her earlier conviction in Cochem District Court. Frits ter Kuile of the Amsterdam Catholic Worker has been ordered to self-report to jail in Germany after the authorities failed to coerce his payment of the civil penalty for a go-in trespass conviction. In a case that stems from the same July 15, 2018 go-in action as Frits and Susan — when eighteen resisters got through the fence at Büchel in broad daylight — Nukewatch’s John LaForge has formally appealed lower court convictions for trespass to Germany’s highest tribunal, the Constitutional Court in Karlsruhe. Attorney Anna Busl in Bonn submitted a 36-page appeal brief to Germany’s “Supreme Court” on April 24. The appeal centers on the lower courts’ refusal to hear testimony from expert witnesses, arguing that the courts erred by denying LaForge his right to present a defense. Like many other resisters, LaForge argues that because planning nuclear attacks is an international criminal conspiracy to commit massacres, the defense of “crime prevention” excuses the trespass. The court won’t rule before August.