On Nov. 1, 2018 the UN General Assembly voted overwhelmingly in favor of welcoming the adoption of the 2017 Treaty on the Prohibition of Nuclear Weapons (TPNW), and calling on UN member states to join the treaty. The TPNW could come into force by the end of 2019, according to a report from the International Campaign to Abolish Nuclear Weapons (ICAN), winner of the 2017 Nobel Peace Prize.

So far, 60 states have signed the treaty and 19 have ratified. It will enter into force and become international law after 50 states ratify. Beatrice Fihn, executive director of ICAN, told Reuters in October, “We have about 25 or 30 countries that say they will be ready [to ratify] by the end of 2019, so it’s definitely possible” to pass the 50-country mark in 2019. The TPNW puts nuclear weapons in the same outlaw category as biological weapons, poison gas, land minds and cluster munitions, all of which are banned by treaties.

A newly launched watchdog publication, the Nuclear Weapons Ban Monitor will now measure progress related to signing, ratification, and entry into force of the TPNW. 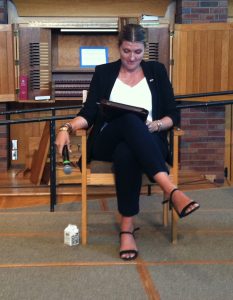 “The real power of the Treaty on the Prohibition of Nuclear Weapons is the creation of the conditions for all states to reject nuclear weapons. Because it has become clear that they are heinous and shameful and have no place in a modern democracy that adheres to international norms of human rights, and the moral and legal prohibitions against targeting civilians in war.”—Augsburg Peace Prize Forum, Minneapolis, MN, Sept. 15, 2018