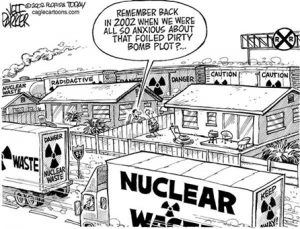 Confronting radioactive waste seems like a Whack-a-Mole game. The nuclear industry pops up with a new dumping or dispersal scheme just when the opposition slows or halts the last one.

After millions of citizens pushed Canada’s Environment Minister to question and delay plans for an underground radiation dump right next to Lake Huron (this fight is not over yet), the Canadian companies UniTech and PermaFix now make news with plans to ship radioactive waste from Canada to the United States. UniTech wants to truck ten-thousand tons of it across the border using five different border crossings.

Ten-thousand tons is a lot of material; one equivalent is a Navy Heavy Cruiser which is two football fields long, four stories high, and 60 feet wide. Cut up into trailer-sized chunks, think of thousands of truckloads of dirty bombs moving throughout the country around lakes and rivers, through cities and towns, and over bridges for years and years. Can you say Homeland Security?

Both UniTech and PermaFix have applied to the Nuclear Regulatory Commission (NRC) for licenses to “export” and “import” thousands of truckloads of “radioactive-contaminated tools, metals and other solid materials.” The vagueness of the applications, with nondescript references to “tools,” “metals,” “other solid materials,” and the curious mention of “incremental amounts of special nuclear material”– is only partly cleared up by a list of 48 different radio-isotopes that will contaminate the “materials.”

These so-called “low-level” wastes are not benign. The allowed “special” materials will include plutonium, strontium, cobalt-60, americium, and neptunium, which are some of the deadliest and most long-lasting poisons on Earth and the worst to come from nuclear power. These and the other 43 identified poisons give off radioactive alpha particles, beta particles, or gamma rays — or some combination — to one degree or another. It’s this “radiation” that makes the waste deadly, because exposure or inhaling or ingesting it can cause heart disease, immune system dysfunction, cancers and leukemias. The effects are cumulative too, so adding more radiation to the exposures we’ve already had shortens our lives even more.

UniTech has already won an NRC “export” license allowing it to ship wastes into the US. (The plan to ship some of it back across the border to Canada is still being contested with the NRC and may end up in court.) Some of UniTech’s waste will be trucked to waste-handling factories in Tennessee, Illinois, and Pennsylvania for “processing.” The bulk of the waste is coming from Canadian nuclear reactors and laboratories.

The proposed US “processing” is, according to UniTech’s license, for: “…segregation, survey, decontamination, unrestricted release, beneficial reuse.” Kay Cumbow, Secretary of the Great Lakes Environmental Alliance, warns that “unrestricted release” means the waste can be dumped in ordinary municipal landfills, and “beneficial reuse” means that contaminated metals can be used in regular smelters like ordinary recycling and ultimately used in consumer products like jungle gyms, frypans, nails and silverware.

This gigantic shell game warrants deeper investigation because waste resulting from the processing and declared “un-usuable” is to be shipped back into Canada, adding another lengthy round of handling and transport risks.

If all this sounds absolutely cray-cray, you may be a precautionary or a prudent person. Dr. Gordon Edwards, President of the Canadian Coalition for Nuclear Responsibility, says that the processing can be done in Canada, so there is no need for the program at all. There must be a substantial financial interest involved in order to voluntarily compound the United States’ own waste containment dilemmas by adding thousands of additional risks.

Pierre Sadik, of US Public Interest Research Group has pointed out that the Department of Energy and the nuclear industry try to create the impression that the transport of radioactive waste has been entirely safe. But this is bunk. A 1996 report by the State of Nevada documented 72 rad waste transport accidents in the US over 50 years.

Thanks to the unsung effort of watchdogs like Diane D’Arrigo and May Olson of Nuclear Information and Resource Service, US citizens have successfully rejected previous attempts to deregulate rad waste and allow it into the scrap metal business. Federal attempts to declare some radioactive waste “below regulatory concern” have repeatedly been halted as completely unacceptable. But the Whack-a-Mole game won’t let up. –– John LaForge