By Peter A. Bradford

Even as Energy Secretary Ernest Moniz in May convened a “summit” to discuss more governmental assistance to the nation’s troubled nuclear power industry, the recent announcement by the Tennessee Valley Authority (TVA) that it is selling its northern Alabama site containing the unbuilt Bellefonte reactors should have sobered the summiteers. Even if the site’s appraised value of $36 million is realized, TVA customers will get back less than a 2016 penny for each of the 6 billion dollars they have spent on the site over 46 years.

Two nuclear reactors were ordered for Bellefonte in 1970. When construction commenced in 1974, the TVA had almost no experience in actually operating a nuclear [reactor], but the TVA program had 16 reactors under construction in addition to one that had operated for a few months. All were at least four times larger than the largest plant that had operated for any length of time anywhere in the United States. All were intended to be completed in the 1970s. They were the TVA’s initial share of the Atomic Energy Commission’s 1972 forecast of 1000 reactors needed by the year 2000, plus [waste fuel] “reprocessing” plants to supply the many breeders among the 1000 reactors. (The authors Irvin Bupp and Jean-Claude Derian have a wonderful 1978 book on the era’s over-optimistic projections, Light Water: How the Nuclear Dream Dissolved.) As it turns out, with Watts Bar 2 coming on line this year, seven TVA reactors will have been completed. The other 10—plus two announced in 2007—are cancelled, with at least $10 billion in customers’ money spent on them in addition to some sweeteners from US taxpayers.

Bellefonte has a prominent place in this waxworks of miscalculation and waste. The two original Bellefonte reactors were the last ordered from Babcock & Wilcox—designers of the plant that melted half its core at Three Mile Island (TMI) in 1979. They therefore received special scrutiny following the TMI accident. Even before TMI though, all of the TVA units under construction had been greatly delayed. By 1984, eight units—ranging from 44 percent to 3 percent complete—were cancelled.

Construction of the four reactors at Bellefonte and Watts Bar continued, albeit at a pace slowed greatly by construction problems, inflation, the accident at TMI, falling demand, falling fossil fuel costs, and rising reactor costs. In 1988, the TVA decided to mothball the Bellefonte reactors as well as Watts Bar 2. Bellefonte Unit 1 was said to be 88 percent complete while Unit 2 was 58 percent done. Construction resumed in 1993 with completion eventually set for 2011 and 2014 respectively. By 2006, when construction was halted again and the Nuclear Regulatory Commission’s (NRC) construction permits were terminated, these completion percentages had been revised to 55 and 35.

Two years later, in 2008, at the height of “nuclear renaissance” fervor, the TVA reconsidered and persuaded the NRC to reinstate the permits. Completion of the two units—said as always to be vital to meet rising demand and maintain the economic health of the Tennessee Valley—was then projected for 2017 and 2021. Unit 2 was cancelled for the third and apparently final time in 2009.

In 2011, the TVA announced the selection of the French vendor Areva to complete the bulk of the nuclear portion of Unit 1. By 2013, with Areva in grave financial straits requiring a bailout from the French government, the then-TVA chair announced a search for a private developer to finish Unit 1. However, by 2015, the TVA resource plan showed no need for baseload capacity beyond what could be supplied by Watts Bar 2 for at least 20 years. Hence, the decision to terminate Unit 1 and sell the site.

Meanwhile, renaissance fervor had swept over Bellefonte in another form. In 2002, the Bush Administration announced its “Nuclear 2010” program, designed to produce at least two new plants by 2010 and to demonstrate that the new licensing process and advanced designs would bring an end to the cost overruns and delays that had plagued US nuclear power since the mid-1970s. “Nuclear 2010” included a commitment to have taxpayers pay half of the engineering and application costs of the new reactors. Congress passed a 2005 subsidy package containing everything the industry was then asking for. 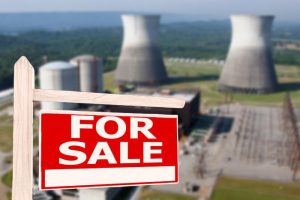 In 2007, NuStart Energy Development, a consortium of utilities and reactor vendors, announced the selection of Bellefonte [in Alabama] as the site of the “reference plant” for the flock of Westinghouse reactors that would follow. NuStart’s October 2007 NRC application for Units 3 and 4 was the start of the two-year-long US renaissance stampede in which applications for 31 new reactors were filed at the NRC. But as Bellefonte 3 and 4 fell behind the pace of construction at the Southern Company’s Vogtle project in Georgia, NuStart transferred the reference reactor designation and the accompanying subsidies to the Vogtle units, which are now at least three years behind schedule and $3.5 billion above the original estimates.

Bellefonte 3 and 4 were cancelled in 2011 in favor of completing Watts Bar 2 and Bellefonte 1. NuStart was disbanded in 2012. Nearly all of the 31 renaissance reactors have been cancelled. Four are under construction.

The TVA reunited with Babcock & Wilcox to pursue yet another new nuclear idea in a 2011 “letter of intent” with Generation mPower (a joint venture of B&W and Bechtel) to build six small “modular” reactors at Clinch River, in Oak Ridge, Tennessee, the site of TVA’s multibillion dollar failed effort to build a breeder reactor—opposed by President Carter and terminated as unnecessary and wasteful by Congress in 1983. The Clinch River breeder’s cost estimate rose from $500 million in 1972, to $4 billion 10 years later. Because the industry consortium declined to raise its contribution above its 1972 commitment of $250 million, US taxpayers were exposed to the entire overrun.

The Energy Department awarded Generation mPower $79 million toward completion of its small modular reactor design. In 2014, Babcock & Wilcox announced that it had lost interest in proceeding with the project on anything like the original schedule due to a lack of investors or customers.

Continuing its expensive 50-year role as the leading enabler of Washington’s nuclear innovation pork barrel, the TVA has applied for an early site permit (but not a construction license) for up to 800 megawatts worth of small modular reactors at Clinch River. At his May 19 nuclear “summit,” Energy Secretary Moniz pledged his department’s continuing support—meaning that US taxpayers will pick up a substantial share of the TVA small modular reactors’ permitting costs. Congress is seeking to add additional support.

At the same “summit” many in the nuclear industry complained that renewable energy enjoys disproportionate federal support and dysfunctional markets. Secretary Moniz promised that his fellow longtime MIT nuclear cavalryman John Deutch would soon produce a report on how best to “incentivize continued operation” of endangered reactors because they are essential to low carbon electric reliability. The role will be familiar to Deutch, a Carter Administration Undersecretary of Energy who has presided over his share of meetings at which dozens of subsequently cancelled reactors were wrongly forecast to be essential for: 1) freeing the electric sector from oil dependence; 2) keeping the nation’s lights on; and 3) lowering electric rates.

Closing reactors abruptly with no measures in place to assure that their replacements will be within acceptable CO2 limits is indeed no way to protect against climate change, but Secretary Moniz isn’t holding summits to figure out the best ways to choose among available electric resources. Instead he has aligned himself with the political pull toys whom the forlornly named industry front-group “Nuclear Matters” parades through state capitals—demanding fresh nuclear support and determined to avoid competing head-to-head with other low-carbon alternatives for that support.

While these road shows roll on, actual experience suggests the wisdom of a more competitive path. Other power supply options are rapidly falling in cost, and large-scale power storage projects are underway in many states. Even new combinations of existing resources are proving competitive in low-carbon contexts. In New York State, competition from a transmission alternative dramatically cut the need to support the Ginna nuclear reactor near Rochester. Another transmission expansion proposes to use the site of the closing Pilgrim reactor in Massachusetts to import more low-carbon electricity than Pilgrim generates. In Nebraska, the board of the Omaha Public Power District announced that it would replace the soon-to-close Fort Calhoun reactor at substantially lower cost through demand reductions and wind energy.

Doug Koplow, whose Earth Track website has for years been the best source of energy subsidy analysis, has chronicled and classified the subsidies received by nuclear power; the total far exceeds those made available to renewable energy: “Since its inception more than 50 years ago, the nuclear power industry has benefited—and continues to benefit—from a vast array of preferential government subsidies….Subsidies to the nuclear fuel cycle have often exceeded the value of the power produced.” Koplow’s subsidies list does not even include most of the costs of the nation’s 120-plus cancelled nuclear plants, or the cost overruns at the operating reactors.

The power market operators are themselves concerned that the ongoing efforts of nuclear reactor operators to obtain special support will undermine the efficiency of the markets. The most outspoken expression of this concern comes from one of the largest wholesale electricity markets in the world—the PJM ISO [for Pennsylvania, Jersey, Maryland Power Pool Independent System Operators].

In a recent study, it bluntly concluded: “The PJM markets show no signs of inadequately compensating legacy units and forcing a premature retirement of economically viable generators….the simple fact that a generating facility cannot earn sufficient market revenue to cover its going-forward costs does not reasonably lead to the conclusion that wholesale markets are flawed. More likely, it demonstrates that the generating facility is uneconomic.”

PJM vice-president Craig Glazer was even blunter. According to Nucleonics Week, he admonished the Moniz “summit,” saying “the regional transmission organization’s policies are intended to reward performance, not just nuclear plant performance. If the question is ‘just save nuclear,’ that’s a different policy goal than to increase the efficiency and reliability of the entire electricity system.”

The Nuclear Energy Institute’s chief executive officer, Marvin Fertel, is flexing his substantial political muscle to deal with market operator skepticism toward nuclear bailouts. Fertel rode into office on the nuclear energy “renaissance.” Riding out on a wave of reactor closures, he expressed to the summiteers his industry’s exasperation with the dawdling and dysfunctionality of its would-be rescuers. He called on Congress to “exercise its oversight responsibilities on FERC [the Federal Energy Regulatory Commission]” to “enforce some semblance of discipline,” said the May 26 edition of Nucleonics Week. Foreseeing the closure of at least another 12 reactors, … Marvin Fertel took slight consolation from the forthcoming John Deutch report. Fertel said: “We know you like nuclear, but all we hear about is renewables…..A report doesn’t do anything unless the RTOs [regional transmission organizations] and FERC do something with it. So you need to get it to them, they need to do something about it, and they need to do it sooner rather than later.”

One cannot open the trade press without seeing Fertel’s blandishments echoed and amplified by industry leaders, by their allies, and by journalists unfamiliar with nuclear history. But how much should these complaints and prophesies weigh beside the “For Sale” sign on the Bellefonte lawn?

—Peter A. Bradford is an adjunct professor at Vermont Law School. He served on the US Nuclear Regulatory Commission from 1977 to 1982, and he has chaired the utility regulatory commissions in Maine and New York. He is vice chair of the board of the Union of Concerned Scientists. This article was written for the Bulletin of the Atomic Scientists, June 2016.