By Felice and Jack Cohen-Joppa

The demand of many Germans to rid their country of US nuclear weapons was again manifest by a 20-week-long series of protests at the Büchel Air Force Base in the Moselle River valley. The sponsoring group, Büchel is Everywhere: Nuclear Weapons-Free Now!, is a nation-wide coalition of 50 peace and justice groups dedicated to nonviolent civil resistance for nuclear abolition. Groups are invited to take responsibility for blockades and other creative protests during particular weeks, while camping on a plot of land next to the base, purchased five years ago by the coalition.

“Civil disobedience is forced on us because the government pays no attention to polite requests for dialogue or to petitions for a nuclear-free Germany. Major social changes, like the ousting of U.S. nuclear missiles from Europe in the 1980s, all require civil resistance to finally be accomplished,” said Marion Küpker, international coordinator for Büchel Is Everywhere!

As they did last year, Wisconsin-based Nukewatch brought a delegation of American nuclear abolitionists to join International Week at the camp, to demand that the small arsenal of US nuclear weapons stockpiled for NATO use at Büchel be sent back home.

After extensive planning in public meetings, and in broad daylight on Sunday, July 15, eighteen people—seven from the US, six from Germany, four from the Netherlands and one from England—cut through the perimeter fence in five places. They entered without interruption and walked around carrying banners, some for over an hour. One group got as far as the base runway before being apprehended. Three people, including Susan Crane, a Catholic Worker from California, walked through two unlocked interior gates and into a high security zone containing four suspected nuclear bunkers. The three climbed atop one bunker where they remained unnoticed for an hour. Guards finally took notice when they unfurled a banner: “Disarm B-61 Nukes”—a reference to the model number of the 20 nuclear weapons estimated to be there.

All 18 activists were eventually discovered, arrested, searched, ID’d and then released over four hours later with no charges, just an order to stay 100 meters away from the base for 24 hours. Their blockade of the gate 12 hours later brought no repercussions.

A Quakers’ group action on July 23 involved timing and coordination. While some blocked the main gate in a routine way, others were poised for entry. On cue, a third group of three fence cutters went to work severing the wires, allowing a group of seven to walk through and get on the runway just as the Tornado jets that would carry the B-61s were to be taking off for practice. Once they’d cut the fence, that group slipped away to alert the base that protesters “are on your runway” and to stop the war games.

Those on the runway were detained, had their IDs checked and were released but were told they may face charges.

Later, a high-ranking air force pilot escorted by a local police officer came to the camp to complain. It was the first time in 20 years of the campaign that a pilot had ever approached the protest camp. With no sense of the irony, the officer scolded organizers, warning that the runway occupation action had endangered protesters and pilots.

“The base’s 20 thermonuclear bombs that pilots are training to use are a threat to the entire biosphere,” replied the campers, “so get your priorities in order.”

Nukewatch coordinator John LaForge remarked, “Yes, it’s hard to break into jail here in Germany. The civil police are so sophisticated that they go to extreme levels to pretend that nothing happened and that nuclear weapons bases are secure. Even German citizens who get prosecuted for ‘trespass’ and ‘damage to property’ (fences) have to refuse to pay fines at several levels to get a couple of days in the jug.”

Two days later, Crane, LaForge, German organizers Marion Küpker and Gerd Büntzly went to the chief prosecutor’s office in Koblenz, asking that the charge of trespass against Büntzly be dropped, unless the same charges are brought against the four Americans, including Crane and LaForge, who joined Büntzly for a go-in action to the nuclear bunkers in July, 2017. Last January, Büntzly was fined for the offense. 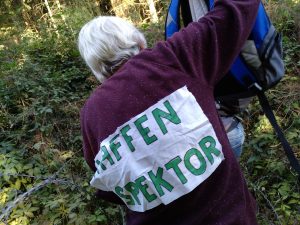 Crane and LaForge, equipped with a radiation monitor, made one last inspection for nuclear weapons on Hiroshima Day, August 6. They clipped through the perimeter chain-link fence and through a more secure razor wire fence inside to reach a set of previously uninspected airplane shelters. They spent an hour atop one of the shelters, recording measurements. After climbing down to inspect a second bunker, they were observed and detained by a large number of soldiers who forced them to lie face-down at gunpoint for about an hour until civilian police arrived.

“We hoped to confirm that the US has removed its nuclear bombs in compliance with the Nuclear Nonproliferation Treaty, but our investigation was halted by the military,” Crane said. “The extra razor wire around the bunker, the near access to the jet runway, and the massive heavily armed military reaction to us indicates the U.S. nuclear weapons are here,” she concluded.

After having their identities confirmed by both military and civilian police, they were driven separately to the main gate. They waited in custody until their passports were returned, and then civilian police released Crane and LaForge at the gate.