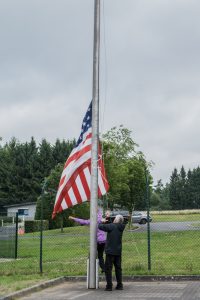 Susan Crane and I took up an idea from Sister Carol, and lowered the US flag. It had occupied a position superior to Germany’s, even at this German base. Having had a lot of experience with flags as a former Boy Scout, the task was done in a blink. But when Susan asked me, “Now what do we do with it?” I had to admit, “I don’t have a lighter,” and could only shout to the other “go-in” activists: “US out of Germany!” (There are some 50,000 US military personnel still occupying the country, 28 years after the end of the Cold War and 72 years after the end of World War II.) Our hosts told us later that no one in Germany would dare to take down the US flag for all the accusations of “anti-Americanism” that would result. Peace activists get called enough names as it is. -JL