Charges of trespass and damage to property have been issued to several dozen peace activists that have joined “go-in” actions at the Büchel Air Base.

Now, after 22 months of delay, authorities have brought two minor criminal charges against me, your Nukewatch co-director.

The alleged offenses are presented in the “penalty order” as if already proven, like a traffic ticket. “On the basis of the facts established by the Public Prosecutor, you are charged to have on July 15, 2018 at Büchel, in two legally independent acts, acted jointly and in concurrent offenses: a) intruded illegally into the fenced property of another; b) damaged or destroyed illegally a chattel belonging to another.”

This action was one of the largest single go-ins in the long campaign of civil resistance at the base. Eighteen people in five groups went through openings cut in the fence in five places, in broad daylight, on a Sunday morning. The resisters were unhindered in the process and the group included elders and one person in a wheelchair. News of the bold breach of the fence—one headline asked “How could this happen?”—reached the German parliament where one member asked from the floor whether the nuclear weapons base was an “amusement park.”

The second alleged offense was a go-in by Susan Crane and me on Hiroshima Day 2018. When we were found after over an hour inside, we were given a robust military police reaction, presumably because we had gotten very close to some of the US nuclear bombs.

The penalty order imposes a fine of 1,500 Euros (50 “day fines” of 30 Euros per day), or, alternately, if the fine goes unpaid, “One day in prison per-day fine.” Like with petty crimes in the US, this offense could be resolved out-of-court by paying the fine.

I have contested the charges, and the order says “there will be a hearing in court.” No date has been set.

However, in several previous cases of charges brought against nuclear resisters from outside Germany, court trials were never scheduled. Penalty orders sometimes appear to have been bluffs, mere attempts to coerce the activists into paying fines.

Other Suspects Named and Unnamed 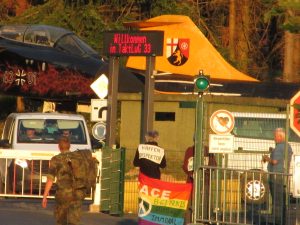 In the paperwork issued to me, Susan Crane, a plowshares activist from the Redwood City, California Catholic Worker, is named as being “subject to separate prosecution”—along with “other persons who are unknown at this stage.” It may be that Susan and others will eventually be charged. At press time neither Susan nor other US citizens that joined “go-in” actions at the base in 2017, 2018, and 2019 have been charged.

The charges against me appear to be the first time that a US citizen not living in Germany has been charged for civil resistance at the base. Only Dennis DuVall, a US citizen formerly of Arizona now living near Dresden, Germany has been convicted of damage to the fence and trespass—for joining the July 15, 2018 action. (See cover story.)

In my work for Nukewatch, I helped coordinate delegations of US peace activists to the protest camp near Büchel in the summers of 2017, 2018, and 2019, and I participated in four different go-in actions. This effort may explain the authorities’ interest in me.

Writing from Germany May 31, in the thick of several upcoming court trials and ongoing appeals court cases of resisters, we are all looking forward to bringing international attention to the lawless US deployment of nuclear weapons here—and to their inevitable ouster. I’ll keep you posted about ongoing events while I’m in Germany and after I get home.