A local beach comber came across a startling object August 17 while walking on the Southshore of Lake Superior near Poplar, 18 miles east of Superior, Wisconsin. The deck-of-cards-sized steel object was stamped with the warning: “CAUTION – RADIOACTIVE MATERIAL” as well as the string of letters—C2O-O8-O. The metal was also stamped with a version of the standard radiation symbol which looks like a ceiling fan with wide blades. The alarmed hiker called the Douglas County Sheriff, and a deluge of official emergency responders soon descended on the small village. 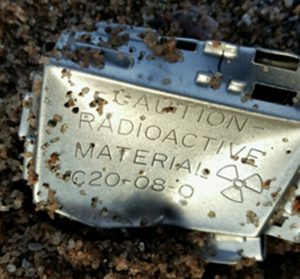 When the story became public, long-time residents of the area called or emailed the Nukewatch office wondering about the Army Corps of Engineers and its dumping of corporate military wastes in the big lake in the 1960s and ‘70s.

The 9th District US Coast Guard office issued a press release from Cleveland, Ohio that noted “federal, state and local agencies worked jointly to determine the contents and source of a mysterious container found on the beach near the mouth of the Poplar River.” However, none of the eight agencies involved were able to determine either contents or the source of the strange object.

The Coast Guard’s press release said, “Initial responders from the US Coast Guard and Superior, Wisconsin, Fire Department determined the metal was not emitting any radioactivity. A follow-on investigation by the Wisconsin National Guard Civil Support Team and Wisconsin Department of Health Services ensured there was no radiation source from the surrounding area and that the object was not a hazard to the public.”

First responders swooped into the little town (pop. 603) from Green Bay and Madison, both five hours away, to examine, take custody, and ultimately dispose of the mysterious item. According to the US Coast Guard, the US Environmental Protection Agency, the Wisc. Department of Health Services, the Wisc. Department of Natural Resources, the Wisc. National Guard Civil Support Team, the Superior Fire Department, the Douglas County Sheriff, and the Douglas County Emergency Management office were all involved.

The Coast Guard also said, “The object has been removed by the Wisconsin Department of Health Services for proper disposal.” The reference to “proper disposal” of harmless, nonradioactive metal was not explained.

Nukewatch asked several participants about the unusual event and the out-sized response. It was the Coast Guard’s Marine Safety Unit (MSU) in Duluth that first sent a team to the Poplar River site, along with the Superior Fire Dept. Lt. Commander Jerry Butwid of the MSU, told me his office sent a team to the site because, “We were 30 minutes away” while the EPA had to travel from Green Bay. Asked if the team identified the origin of the object, Butwid said, “No. We were just the ‘eyes-on-the-scene’ and did some basic generic testing.” Butwid said the Wisconsin Department of Health Services “had jurisdiction and they took it away.”

Lt. John Mack at the Coast Guard Marine Safety Unit in Duluth said he knew of no additional photographs of the box that might aid in identifying its owner or manufacturer. “I don’t believe we took that photo,” Mack said, “maybe the fire department.”

Steven Panger, Chief of Superior Wisconsin Fire Department (SFD), told Nukewatch, “We had a few other pictures, but they’re the same,” adding, “Actually those were from the resident [who found the object]. She sent them to us.” The Coast Guard press release included one photograph of the item with the credit, “US Coast Guard photo,” perhaps done to protect the privacy of the beach walker.

The SFD produced a routine incident report of the finding that included remarks by two members of the department’s four-person Regional Chemical Assessment Team. Captain Andrew Knutson reported that while no additional markings were found on the metal, “It was however discovered that at some time the device appeared to be affixed to something and had been ripped off. The back side appeared to have been torn open revealing that the device was empty.” Sgt. Ed Bunayon of Wisconsin National Guard’s 54th Civil Support Team in Madison was also sent to Poplar. Bunayon, who said his unit “specializes in WMDs,” thought the item “looked like a cover of something like a smoke detector. But it was old, nothing like equipment we see today.”

Paul Schmidt of the Radiological Emergency Response section of the Wisc. Dept. of Health Services said his report of the event was not yet available. “We did an extensive area survey, to determine there was no radiation,” Schmidt said. Jason Hunt who led the department’s response team said Sept. 7 that the report was complete but being reviewed prior to publication. Both men said their investigations failed to determine the container’s origin.

Without access to the various departmental incident reports, no connection to the Army Corps of Engineers’ decades-long history of Lake Superior dumping could be established.