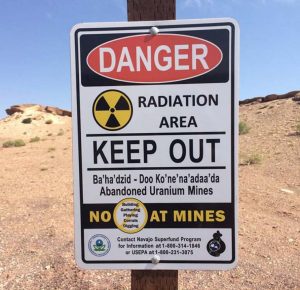 One of the field researchers for the Navajo Birth Cohort Study was told by a mother that she uses tap water to mix her baby’s formula, a harmless routine for most parents.

This is not the case in the Navajo Nation where uranium was mined to build bombs beginning in 1944, leaving behind mountains of radioactive waste material that is still impacting newborn babies today, 75 years since mining started and over 20 years after the last uranium mine was shuttered.

One-quarter to one-third of Diné (also known as Navajo) women and men and some infants have radioactive uranium levels “that exceed those found in the highest 5% of the US population.” That is the finding of Dr. Loretta Christensen, Chief Medical Officer of the Navajo Area Indian Health Service, who gave preliminary results of an ongoing study at a Congressional hearing Oct. 7 in Albuquerque, New Mexico called “America’s Nuclear Past: Examining the Effects of Radiation in Indian Country.”

In a November 7 interview with KUNM radio, Dr. Christensen discussed some of the study’s early findings. “Obviously we’re very concerned about looking at environmental contamination in moms and babies, because we’re saying, ‘Is this passing on? Is it now showing up in our babies?’ And, unfortunately … it appears it is.”

Radioactive uranium contamination is not only present, but impacting newborns who are one or two generations away from the time of active uranium mining operations. Dr. Christensen said, “Our hope is that we can mitigate the effects of that by keeping them healthy, by checking kidney function, by helping with childhood development, [and] by screening for cancer so that if it does occur we catch it very early. We do know now we can help in some ways to mitigate worsening of disease by being very proactive.”

Radiation-related health impacts come as no surprise to those living near the more than 500 abandoned uranium mines or the 1,100 uranium contaminated sites on the Navajo Nation alone. Cancer rates doubled in the Navajo Nation between the 1970s and the 1990s. Even the United States Public Health Service conducted an infamous and illegal study in 1950, without consent of Diné uranium miner subjects, that linked the radioactive radon gas in mines to lung cancer. The scandal was described in the 1996 book The Human Radiation Experiments: Final Report of the President’s Advisory Committee. Yet, it wasn’t until 2009 that Congress required a health investigation resulting in the Navajo Birth Cohort Study.

The ongoing study is being conducted simultaneously with the Environmental Protection Agency’s current “Five Year Plan.” The EPA is carrying out its third “Five-Year Plan,” which began in 2008, to investigate and cleanup abandoned uranium mines. But one-third of the mining companies have closed or gone bankrupt, leaving taxpayers holding the bill.

“In Navajo communities the perspective of cleanup of uranium mining is more holistic than the government’s focus on containment. It includes: general community wellness, human health, the health of plants and animals, water quality, and the whole ecosystem that was impacted. That is what we are talking about when we say cleanup,” said Leona Morgan, who works with Diné No Nukes and Nuclear Issues Study Group.

The results of cleanup efforts may be questionable due to revelations highlighted by private investigator Susie Nielson who reported in High Country News October 17. The EPA’s choice for a major $85 million mine contamination assessment contract is TetraTech EC’s parent company. Two of TetraTech EC’s former company supervisors were each sentenced to eight months in prison for falsifying records of clean up at Hunters Point Shipyard in San Francisco after they’d asked subcontractors to submit clean soil samples, replacing potentially radioactive samples.

The Navajo Nation is one of many targets of environmental injustice where the production of nuclear weapons, not to mention the fallout from bomb test detonations, has caused death and disease for generations. Meanwhile, the Navajo Birth Cohort Study continues, and the Navajo Nation has built its first cancer clinic which opened in September.