BÜCHEL, Germany — Calling themselves “Treaty Enforcement Action,” four peace activists (from the United States, Germany, Great Britain, and the Netherlands) cut through two perimeter fences and quickly entered the Büchel Air Base here around 4 p.m. July 10, 2019, carrying banners declaring the US and German Air Force’s planned use of nuclear weapons here makes the base a “crime scene.” While posing for photographs, the four were detained by air base security personnel, and later taken to jail in Koblenz and held overnight. All eight were released early Thursday.

Outside the high-security base, four others from the group posted “Crime Scene” notices on the outer fence and along a perimeter bike path. All eight activists were detained by security personnel and found in violation of a “Stay Away Order” issued earlier the same day. For violating that order, the eight were taken into custody, brought to Cochem for a court hearing, and transferred to jail in Koblenz.

The earlier “go-in” Wednesday at the Air Base saw 11 activists walk through the air base’s main gate and try to serve officials there with a self-styled “Treaty Enforcement Order.” The reference is to the international treaties on prohibition of nuclear weapons (2017), on the nonproliferation of nuclear weapons (1970), and Geneva Conventions which prohibit mass destruction. 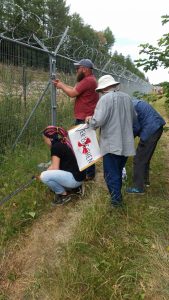 The protesters’ order called for the immediate removal of US B61 nuclear bombs from the base, and their prompt return to the United States for dismantlement. The base is the site of the US 702nd Munitions Support Squadron which controls a “Priority Level 1” stockpile of twenty B61 thermo nuclear bombs.

“The nuclear weapons must be removed, not just because they are unlawful, but because of the poor security at the base,” said Marion Küpker, spokesperson for the 68-member German-wide campaign Büchel is Everywhere! Nuclear Weapons-Free Now! “Members of the military and civil police declared several times that nonviolent go-in actions would now be impossible. Soldiers, a new private security company, and civil police are working together closely this year to guard the base, but they failed,” Küpker said, “even after months of publicity announcing that protesters would defy the newly increased base security this July.”

On April 30 this year, a group of 11 peace activists was the first to foil the base’s new fence, when they cut and dug under the wire and steel barrier to gain entry.

This year marks the 3rd time in three years that a delegation of US peace activists has joined Europeans and others in nonviolent actions against the US nuclear weapons. The German group Nonviolent Action for Abolition of Nuclear Weapons (GAAA) convenes “International Action Week”, and invites peace groups to conduct nonviolent actions highlighting three goals: 1) permanent ouster of the unlawful US nuclear weapons; 2) cancellation of plans to replace today’s B61s with new nuclear bombs; and 3) ratification by Germany of the 2017 Treaty on the Prohibition of Nuclear Weapons.

John LaForge, of the US peace group Nukewatch [www.nukewatchinfo.org] and coordinator of the US delegation, said, “There have been hundreds of accidents with nuclear weapons [see the website www.atomkriegausversehen.de(Belgium)], which show that deterrence is an illusion. And, with amateurs like us getting on base, that it’s impossible to keep the weapons themselves secure.”

Wednesday’s daring go-ins follow actions in 2017 and 2018 in which 60 protesters got inside the base, occupying the Air Force’s runway and even three different Protected Aircraft Shelters where the nuclear weapons can be stored. Since then, the military constructed its new perimeter fence.