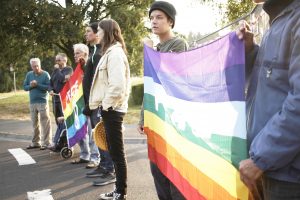 The US delegation to Büchel:

For the second year in a row, Nukewatch organized a US delegation to the German peace camp outside the Büchel Air Base, in conjunction with Gewaltfreie Aktion Atomwaffen Abschaffen (Nonviolent Action to Abolish Nuclear Weapons) and Marion Küpker, coordinator of the group’s five-month-long series of actions. International Week, July 10-18, was an exciting and rebellious time of discussion, planning, training, blockades, “go-in” actions, and anti-nuclear solidarity. Other internationals came from Italy, Spain, England, The Netherlands, Austria, and even New Zealand. For our part US delegates arrived in camp from New York, Idaho, Wisconsin, California, Georgia, and Missouri. Susan Crane from the Redwood City, CA Catholic Worker came for a month to be part of the camp staff and I did the same for six weeks. Ann Suellentrop of Kansas City got to Germany early and did a speaking tour of seven cities on the subject of resistance to the Kansas City Plant and its production of non-nuclear parts for US nuclear weapons.

A few of the US delegates replied to Nukewatch’s invitation to share a short recollection of their experience of International Week. —JL

Variety describes my Büchel experience. The camp had color. It had the persistent flapping of bright banners in the wind and I walked through flat jungles of chalk drawings, tents and tie-dyes under blue skies. Women in Black, Men and Women, children and old folks, people as varied as the nations, states, ideologies, habits, enthusiasm, creativity, interests, talents, projects, emotions and experiences showed up at Büchel. Büchel is Everywhere.

Friends, comfort, food, chores, chats, and resistance to nuclear weapons embody my reflection of this year’s “Nuclear Weapons-Free Now!” peace camp in Germany. This camp turned out to be as invigorating as last year, and was made even better by the introduction of a camp shower which made bonding with dozens of others in hot summer days even more pleasant.

I made new friends. Petra, I love you and thank you for all of the delightful kitchen time and the variety in meals. Max, you are not forgotten. Hubert, thanks for bringing Kami.

The gathering turned into a reunion of many precious friends made last year and of those I knew from the US—brought together for the single purpose of getting H-bombs removed from Germany. Since the vast majority of Germans want those weapons removed, I felt constantly in good company.

The hubbub of camp repeatedly included action planning, banner painting, blockades of the base gates, fence transgressions, rallies, and then doing it all again. I helped cut through the fence and occupied the base school yard, an action that would result in months if not years in prison if done in the US. In Germany, police served tea and escorted us off the property. It’s a pleasure to be arrested in that country and everyone, including you dear reader, has a chance to join-in next summer. The bombs are still there in spite of our colossal efforts.

Even the sounds offered a wide-range of reflection. Every day except weekends, the massive jets take off from the base saturating the airspace with thick thunder. Once the pilots finished for the day, sweet guitar, harmonica, drums, flutes and voices filled the air. Between war plane takeoffs, presenters presented, travelers shared stories, and conversations in a circle around the campfire constant. We ate together, sang, painted, chatted, and laughed.

The hard work of Marion Küpker and John LaForge, Wolfgamg, Beate, Thomas, our wonderful camp cooks Petra and Stephanie, the talented camp tenders, Rainer, Martin, Hubert, Heiko, and so many others, made this event, filled with a variety of events, worth attending. Special thanks to Sharon Cody for making possible this journey filled with the colors of the rainbow and peace.

Peter Kropotkin is often remembered for his ideas about mutual aid: about the power and energy that is released when people work together. Instead of Darwin’s ideas of competition and survival of the fittest, Kropotkin liked to study nature to witness how life thrives where there is cooperation. He studied bees and ants, observed flocks of birds and studied human history. He found that in the struggle to cooperate, in mutual aid, we build a hive, a colony, a future.

And that is what I saw at the Peace Camp. People able to make their own decisions while working together sparked bursts of energy.  Respect for each individual’s contribution, and the love of direct action with others created a safe place to imagine actions.  Mutual aid was practiced by internationals and 50 peace groups coming together, across languages and borders, with nonviolence and fierce determination to make this planet home for our 7th generation of grandkids.

I didn’t get to meet people from each of these 50 groups, but I was astounded with the diversity of people who came at different times to focus on the abolition of nuclear weapons and getting the US nuclear warheads out of the Büchel air force base. It was heartening to work with the DKP, the “no money for war” tax resisters, the artists, the Quakers, the work camp youth from Mutlangen, the Lutherans, the Dusseldorf Peace Group, and the individual people who came to contribute so much to the camp who could build and fix anything. Kropotkin was right: “Mutual Aid” is the answer.

The Peace Camp’s July 15th action was a great honor to take part in—to bring attention to the unspeakable horror and the sheer illegality of this hidden industry, and to our colleagues the Kings Bay Plowshares now challenging US courts for similar actions. I arrived in Büchel without doubt in my heart for good reasons. I was inspired in this work by Sisters Ardeth Platte and Carol Gilbert, with whom I shared a month-and-a-half of daily meetings at the UN during the negotiations for the Treaty for the Prohibition of Nuclear Weapons. Ardeth and Carol left the day after the treaty’s breathtaking adoption (July 7, 2017), to hand the treaty directly to Büchel Air Base’s commanding officer. It was their enthused recommendation along with a call for support, recognizing some 93% of German citizens who want our bombs out. My early morning routine each day at Büchel’s gate would be putting up Nukewatch’s banner U.S. H-Bombs Out of Germany. For years I’ve been waiting for one ally in NATO to say, “US we appreciate you, but not these most dangerous lies.” The intimate bonds of newly formed wider community remain with the deepest gratitude.

The “go-in” direct action was the high point and most fun of International Week at Büchel. I was inspired by the solidarity in planning and doing the action. I look forward to future actions to remove the B61 H-bombs from Germany, and to disrupt and prevent the US and NATO from replacing existing H-bombs in Europe with 250 smaller, low-yield H-bombs, the B61-12. The “modernized” B61-12 is said to be more “usable,” meaning it’s more likely to be used, making global resistance to nuclear weapons more urgent than ever, in Büchel and everywhere.