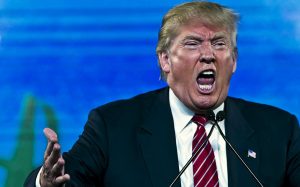 Donald Trump denounced North Korea and its president Kim Jong-un as “depraved” before the United Nations Sept. 19, saying the nation “threatens the entire world with unthinkable loss of life.” Of course North Korea can barely feed itself, and yet has to defend itself against an onslaught of Western hostility, UN sanctions, and ongoing US/South Korean war games which are rehearsals for an invasion of the North. It tests rockets and bombs to be sure, just as the US and its allies and adversaries do all year round. It’s big business.

Trump’s claim that North Korea is threatening is preposterous since it has no deliverable nuclear weapons at all. Secretary of Defense James Mattis said last week that North Korea is no danger to the United States. In June 2016, the Institute for Science and International Security reported that Pyongyang may have between 13 and 21 warheads. The CIA, whose job it is find hostile weapons (even where they don’t exist) says Pyongyang has at most about 21. US intelligence agencies’ combined estimates are that while it may have miniaturized a nuclear warhead, North Korea has no missile that can drop them on the United States. The Federation of American Scientists is more skeptical and estimates it has “potentially produce[d] 10-20 nuclear warheads.”

Like an 8th grade imbecile contradicting himself repeatedly, Trump claimed that North Korean President Kim Jong-un “is on a suicide mission.” In April 2016 Trump had called him a “smart cookie.” Kim appears quite the opposite of suicidal since Pyongyang’s missile and nuclear programs are aimed at preventing a repeat of the Korean War in which, according to US Air Force General Curtis LeMay, “we burned down every town in North Korea.”

Trump asserted that, “[I]f the United States is forced to defend itself or its allies, we will have no choice but to totally destroy North Korea.” Here is Trump in a nutshell: Condemning threats of “unthinkable loss of life” in one sentence, then making precisely the same threat in the next. Perhaps Trump knows nothing about the Korean War, but the idea that the United States might “have no choice” but to totally destroy an entire country is not just a deliberate lie and an outrage, it is intended to prepare the population to get comfortable with bloodlust and atrocities, and intended to teach children to embrace them as well.

Governments always have a choice about whether to begin bombing, and since North Korea has done absolutely nothing against the United States or its allies, Trump’s hate-filled spittle about total war is all the more monstrous. Delivered before the world’s largest peace group, Trump’s ghastly threat was a barbaric embrace of genocidal violence.

Trump must have for a moment believed that to “totally destroy North Korea” is a “thinkable loss of life,” as opposed to the “unthinkable” sort that he condemned. But if he did, — a big “if,” since Trump seems not to think that words have meaning, — then it is Trump himself who is depraved. He must be ostracized, stigmatized and shamed into resigning so his Administration of Hate can be replaced.

The United States’ destruction of North Korea from 1950 to ‘53, and today’s threats of more should, be considered in the context of the living memory of its older generation. Robert Neer’s 2013 book “Napalm” (Belknap Press of Harvard Univ. Press), reports that Gen. LeMay, head of 21st Bomber Command, wrote, “We killed off over a million civilian Koreans and drove several million more from their homes…” Neer reports that more bombs were dropped on Korea than in the whole of the Pacific theater during World War II — 635,000 tons, versus 503,000 tons. “Pyongyang, a city of half a million people before 1950, was said to have had only two buildings left intact,” according to “Napalm.”

Howard Zinn’s groundbreaking “People’s History of the United States” says, “Perhaps 2 million Koreans, North and South, were killed in the Korean war, all in the name of opposing ‘the rule of force.’” Bruce Cuming’s  history “The Korean War” (Modern Library, 2010) says, “[O]f more than 4 million casualties … at least 2 million were civilians. … Estimated North Korean casualties numbered 2 million including about 1 million civilians… An estimated 900,000 Chinese soldiers lost their lives in combat.”

According to Neer in “Napalm,” Gen. Douglas MacArthur testified to Congress in May 1951: “The war in Korea has already almost destroyed that nation of 20 million people. I have never seen such devastation. I have seen, I guess, as much blood and disaster as any living man, and it just curdled my stomach, the last time I was there. After I looked at that wreckage and those thousands of women and children … I vomited.”

Trump used the word “sovereignty” 21 times in his speech. The United States is devoted so convincingly to national sovereignty that it has maintained military occupations and shooting wars inside Afghanistan and Iraq for a combined total of 30 years and counting, and is simultaneously making war on five other sovereign states in the region. Add to the historical list of the attacked: Yugoslavia, Serbia, Iran, Bosnia, Somalia, Kuwait, Panama, Nicaragua, El Salvador, Grenada, Lebanon, Cambodia, Vietnam, Laos, Peru, Dominican Republic, Cuba, Guatemala, and of course Korea. Not a single UN delegate was aware of the president’s deceit or hypocrisy, which explains the roaring applause in the General Assembly during Trumps bomb threats.