Calling a federal review report issued last week on a proposal to bury nuclear waste beside Lake Huron “flawed,” close to 100 public interest groups issued an “Open Letter to the Government of Ontario” May 15, calling on the province to step up and halt the project in light of a failed and error-filled federal process.

The letter calls on the government of Ontario, as the sole shareholder of Ontario Power Generation (OPG), to direct the provincial utility to withdraw its proposal to bury hundreds of cubic meters of radioactive waste in limestone caverns beside Lake Huron, beneath the Bruce Nuclear Site. OPG is the proponent of the burial scheme. 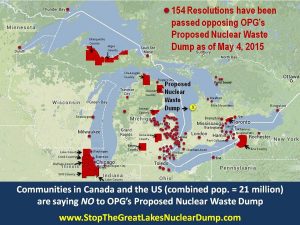 On May 6, a panel appointed in 2012 by the federal Minister of the Environment and the Canadian Nuclear Safety Commission provided the Minister with its final report on its review of OPG’s proposed Deep Geologic Repository for low- and intermediate-level radioactive waste. The Joint Review Panel (JRP) recommended that the federal minister approve the proposed repository despite volumes of expert testimony and evidence it heard during public hearings that detailed the proposal’s numerous technical uncertainties and gross incompleteness. The proposal still faces growing public opposition.

“They got it wrong, plain and simple,” said Eugene Bourgeois, closest neighbor to the Bruce Nuclear reactor complex. “There are layers upon layers of dishonesty at play here. This [JRP] has now teamed up with the nuclear industry to rush ahead with unproven technologies to bury wastes OPG claims are being safely managed where they are, and to continue to ignore some of the most vulnerable and most hazardous wastes…”, he said.

OPG’s proposal was to bury 200,000 cubic metres of low and intermediate level radioactive wastes produced during reactor operations deep underground in a series of underground caverns carved out of limestone. Weeks before the federal hearing began in September 2013, OPG publicly acknowledged its intention to double that amount by adding decommissioning wastes—including radioactive reactor components and contaminated building materials and rubble—through a license amendment after approval based on the initial proposal has been issued.

“The Joint Review Panel got one thing right: they named OPG’s proposed burial plan as “precedent-setting” and described it as “likely … to assist” in the push to bury high level nuclear waste. We’ve always seen this project as the nuclear industry’s trial balloon for nuclear waste burial,” said Brennain Lloyd, a spokesperson with Northwatch, a principle intervener in the case.

OPG also holds majority control in the Nuclear Waste Management Organization, an association of provincial utilities in Canada who operate nuclear reactors. The NWMO is currently investigating nine communities as potential burial sites for high level nuclear fuel waste, including six in northern Ontario and three in the vicinity of the Bruce nuclear site.

“These wastes have to be isolated from the environment for hundreds of thousands of years; burying them in limestone right beside Lake Huron simply makes no sense,” said Kevin Kamps, a radioactive waste specialist with US-based watchdog group Beyond Nuclear.

“Ontario Power Generation’s experts during the hearing talked about Lake Huron being large enough to dilute radioactive wastes that leaked from the repository. That a federal hearing panel would accept using the Great Lakes for the dilution of radioactive pollution as a solution to the industry’s waste management problems robs their report of any credibility,” Kamps said.