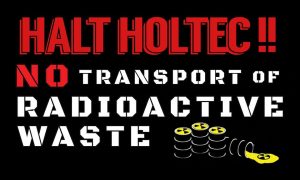 Holtec International in partnership with Eddy-Lea Energy Alliance (ELEA) is currently seeking to license, build and operate a “temporary” dump for high-level radioactive waste—used reactor fuel rods. Their proposal to the Nuclear Regulatory Commission (NRC) anticipates waste storage for 40 years initially, with 80 years of renewals, totaling 120 years of operation. Since the application for the Consolidated Interim Storage (CIS) facility in southeast New Mexico was submitted in March 2017, opponents have been raising their voices against it.

Completing the licensing application and becoming permitted to operate a CIS is a long procedure. Nonetheless, Holtec has met legal resistance at every step. Recently, the application has been before the Atomic Safety Licensing Board (ASLB), which functions under the NRC. Aside from the ASLB process, Holtec’s National Environmental Policy Act (NEPA) evaluation is also moving forward.

Six separate petitioners submitted over 50 arguments to the ASLB opposing the project. These entities formally challenged the legitimacy of Holtec’s application and raised “contentions” about nation-wide waste transports, risks to water, integrity of canisters, legality of the license, exposure to radiation, and environmental justice, to name a few. The NRC/ASLB judges denied all the original contentions. Appeals to intervene by the petitioners were also denied (See “NRC Okays Unlawful Licensing Language in Planned NM Radioactive Waste Site”). Another round of appeals will be filed and a few contentions may be considered. One in particular relates to safety concerns over the proximity of oil and gas production to the dump site. The issue was raised by New Mexico State Land Commissioner Stephanie Garcia Richard, who also informed the NRC that Holtec neglected to communicate with the State Land Office and misrepresented its ownership of the site.

As part of the NEPA assessment, Holtec’s Draft Environmental Impact Statement was recently published, and the NRC is currently accepting public comments. However, there are no clear plans for public hearings. Community members are concerned that the NRC may hold webcast meetings in lieu of in-person hearings, silencing the voices of the area residents who are most impacted. People of color, mostly Hispanic, would be disproportionately affected if the proposal moves ahead—a clear example of environmental racism.

Terry Lodge, attorney for a national coalition of organizations that was denied intervention by the ASLB, says, “The Draft Environmental Impact Statement answers nearly none of the questions raised by the seven grassroots groups who intervened from across the country. The evidence shows that Holtec may hold [waste reactor] fuel indefinitely, counted as multiple centuries, not 100 years. If there is no final underground repository licensed, Holtec—sitting there with shallow-buried ‘forever’ waste—is it. New Mexico must not lose this fight.”

Two applications for CIS are currently going through the NEPA process. Interim Storage Partners’ application is facing a time line and pattern of opposition similar to Holtec.

Take Action: New Mexico’s and national groups opposing both proposals urge everyone to send public comments by their respective deadlines: September 22, 2020 for Holtec/ELEA, and Sept. 4, 2020 for Interim Storage Partners (Waste Control Specialists/Orano USA). Holtec: E-mail comments to: Holtec-CISFEIS@nrc.gov. Please include the Docket Number—docket ID NRC-2018-0052—in your email subject line, as well as in the text of your emailed comments.  See sample comments here. Waste Control Specialists (Interim Storage Partners): WCS_CISF_EIS@nrc.gov. The Docket ID, NRC-2016-0231, should be included in the subject line of comments.