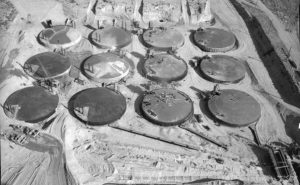 Some of the 177 tanks holding 56 million gallons of liquid high-level radioactive wastes at the Hanford Reservation on the Columbia River in Washington state. At least 77 of the tanks are leaking. Over a period of 40 years, nine Hanford reactors along with chemical “reprocessing” to get plutonium for weapons, produced billions of gallons of such waste. At least 450 billion gallons were dumped on land or injected into deep wells. Clean up operations could last 100 years were estimated in 1988 to cost $175 billion. Energy Dept. photo.

Last April’s explosive news from the folks who bring us safe, effective, reliable nuclear power and weapons, was that at least four barrels of military radioactive waste blew apart somewhere inside Idaho National Laboratory (INL) property, near Idaho Falls. INL officials said the “ruptured” or “breached” barrels contained a sludge of unidentified fluids and solvents from the long-shuttered Rocky Flats plutonium weapons site near Denver. INL officials said they were trying to determine which radioactive materials are in the sludge.

The April 11th accident was reported by ABC News, the Associated Press, the Seattle Times, the Japan Times, Industrial Equipment News, and Fox Radio among others. Laboratory spokespersons at first said a single 55-gallon drum holding radioactive sludge “ruptured.” Energy Department (DOE) spokesperson Danielle Miller wrote April 12 that, “Later, there were indications that a second and possibly a third drum may have been involved.” On April 25 Erik Simpson, a spokesman for DOE contractor Fluor Idaho, announced that in fact four barrels had burst. Simpson said the “ruptures” were heard outside the building where they took place, but he didn’t call them explosions.

The DOE’s Miller called the prompt deconstruction of the waste barrels an “exothermal event”—a pseudonym for “bomb” that means “a chemical reaction accompanied by a burst of heat.” The phrase harkens back to the official gibberish used to describe an explosion of hydrogen gas in a loaded high-level radioactive waste cask at Wisconsin’s Point Beach reactor site in May 1996. The cask contained 14 tons of highly radioactive used reactor fuel, and the explosion (a word strenuously avoided by industry PR folks) lifted the cask’s 4,000-pound lid and left it askew. Point Beach operators called it a “gaseous ignition event.”

One theory about the cause of the bursting waste drums is that “radioactive decay made the barrel[s] heat up and ignite particles of uranium,” the AP reported April 12. Unfortunately for the first responders, “When the firefighters left the building, emergency workers detected a small amount of radioactive material on their skin.” The very next sentence in this AP story has the DOE’s Miller saying, “None of the radioactive material was detected outside of the building where the rupture[s] occurred.”

Because of what officials said was “decades of secretive record-keeping,” INL officials do not “know the exact contents,” of the barrels, Joint Information Center spokesman Don Miley reportedly said. Neither DOE nor INL described what got on the firefighters’ skin.

Miley told the press, “They haven’t run into anything like this actually happening”—but exploding rad waste has been around a long time.

It happened on Valentine’s Day 2014, at the US Waste Isolation Pilot Plant in Carlsbad, New Mexico. A barrel of military plutonium waste exploded underground, contaminating the entire facility, including the elevator and ventilator shafts, and even poisoned 22 workers internally because they inhaled plutonium-laced dust.

More recently, on October 18, 2015, a fire and explosions spurred by rainfall hurled 11 buried barrels of radioactive chemical waste from a trench into the air and spewed debris like a geyser 60 feet high at a “US Ecology” site near Beatty, Nevada. This shocking fire in one of 22 shallow trenches of radioactive waste couldn’t be put out with water hoses because water started it in the first place. Authorities had to close US Highway 95, cancel school, and await more explosions while they let the fire burn itself out. US Ecology had its records seized by Nevada’s Radiation Control Program, which has never disclosed what sorts of radioactive materials were burned in exploded Trench 14—although the dump site is known to hold a total of 47 pounds of plutonium and uranium isotopes.

In September 1957 at Kyshtym in Russia, a tank holding 70 million metric tons of highly radioactive waste exploded and produced a massive plume that contaminated 250,000 people across 410 square miles.

High-level radioactive waste always comes with the risk of explosions, and the danger helped move the Obama Administration in 2010 to cancel plans to use Yucca Mountain, Nevada, northwest of Las Vegas, for the burial of 80,000 tons from commercial US reactors. Physicists Charles Bowman and Francesco Venneri at the Los Alamos National Laboratory warned in 1995 that at the Yucca site the material could erupt in a catastrophic explosion after steel containers dissolve. Bob Halstead, Director of the Nevada Nuclear Waste Project Office, has called the Yucca project, “an exercise in planning for a nuclear catastrophe that is fundamentally rhetorical. It’s theatrical security because the preparations that are being made by the Department of Energy have no real chance of succeeding. They satisfy the public…because they’re a symbol of control….This waste is going to be deadly for tens of millions of years….”