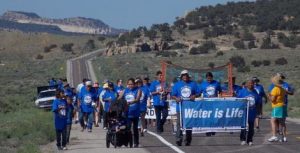 July 16th is a day of infamy for New Mexico, as it is the anniversary of the world’s largest uranium spill near Churchrock in 1979, and of the Trinity test, the first atomic weapon detonation in 1945.

In 2016, organizers in uranium-impacted communities called for an international day of action every July 16, to spotlight the unaddressed consequences of the Churchrock Spill and the ongoing global genocide of indigenous peoples from nuclear colonialism. The first to respond were organizers [Nukewatch and Nonviolent Action for Abolition of Nuclear Weapons, Germany] protesting the deployment of US weapons at the German military base in Büchel in 2017. In 2018, solidarity events took place in the US, Germany, Spain, England, and France. This year, the local group Red Water Pond Road Community Association held its 11th annual day of remembrance of Churchrock. More than 200 folks attended from as far away as Japan. 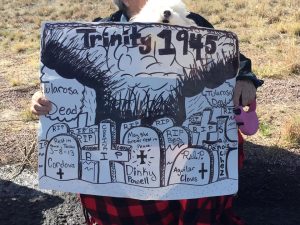 The Tularosa Basin Downwinders Consortium (TBDC) hosted a town hall meeting and its 10th annual candlelight vigil to remember the lives lost due to the Trinity Test. Participants called out the names of all those lost to cancer, and read statements of support from Congressional offices and allies. Tina Cordova of TBDC reported that they “called out around 800 names. The list grows every year. We also held a tribute in memory of all the children that were lost as a result of the Trinity Test or were stillborn. This is such a horrible legacy! Children died and the government still lied.”

Toshiya Morita, a second generation Hibakusha (people affected by the 1945 atomic bombings of Hiroshima and Nagasaki), traveled from Kyoto, Japan to take part in both the Churchrock and Tularosa events. Morita recalls, “When I went to New Mexico I saw a lot of Hibakusha. Most of them are Indigenous people by uranium mines… [and] other Hibakusha by nuclear tests. I feel all of Hibakusha in the United States are one of my family… I want to walk with all of you to the no nuclear world!”

Also on July 16, Representative Ben Ray Lujan, D-NM, introduced the Radiation Exposure Compensation Act Amendments of 2019 (H.R. 3783). The bill would extend much-deserved compensation to all who have been impacted by the US military’s use of uranium weapons. The bill includes an apology, an extension of the fund until 2045 (beyond the current 2022 sunset date), and expansion of compensation to uranium mill and mine workers who worked after 1971 (up to 1990) and to nuclear weapons test downwinders in additional locations—including Tularosa Basin and Guam. A similar bill was introduced in the Senate on March 28, 2019 by Senator Mike Crapo of Idaho (S. 947).

Today, the same region of Trinity’s radioactive fallout is being threatened by two proposals for consolidation of high-level waste nuclear fuel from reactors. Although New Mexico does not have any commercial nuclear power reactors, and such a waste dump would not be legal, the Nuclear Regulatory Commission (NRC) is proceeding with the National Environmental Policy Act process for license applications from both Holtec International and Interim Storage Partners’ (ISP). ISP is a partnership between Waste Control Specialists and Orano—formerly Areva Corp. Scoping for both dumps was completed in 2018, and the Draft Environmental Impact Statement for Holtec is expected in March 2020, while ISP’s is expected in May 2020. Both proposals are being legally challenged within the NRC’s Atomic Safety and Licensing Board (ASLB). The ASLB hearing for ISP took place in Midland, Texas, on July 10 and was well attended by community folks opposing the so-called “Consolidated Interim Storage” facility.