On Feb. 18, 2021, an exclusive investigation by WKRC-TV’s chief investigative reporter Duane Pohlman in Cincinnati looked into widespread US transportation of radioactive materials and associated risks of poor regulation and management. Every year around three million shipments of radioactive material travel across the US, most in trucks on the highways, according to the Environmental Protection Agency. While the EPA assures that these shipments are safe, individuals directly involved aren’t convinced. In an interview with Pohlman, trucker Andy Charles relayed his experience hauling radioactive materials, traveling non-stop from Ohio to Kentucky, and from Tennessee to Texas. Many warning signs came up that Charles now wishes he had taken more seriously. 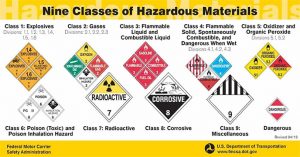 First was the lack of cargo information, “They did tell us it was uranium, but that was pretty much it.” Exactly how radioactive the cargo was remained a mystery. Charles also doubted the effectiveness of the cylindrical shipping containers, and although such shipments are supposed to be in “special containers,” government agencies admit that they are often not used. Charles spoke of concerns for the safety of other travelers, “We were blazing down the highway, 60-70 miles an hour. If there’s any kind of leak, or whatever, it’s blowing in the wind.” Drivers wore no safety gear, only a dosimeter which was rarely checked by safety officers. Charles told Pohlman, “It was not like they was really concerned with it.” A panic button was installed in the truck cab, with the promise that “if we noticed any suspicious activity from cars or anything around us, that we would push that button and somebody would be to us in minutes,” Charles said. The designated route to be traveled could not be deviated from, and had to be completed non-stop.

Charles was right to doubt his safety. Jim Walburn, a retired transportation specialist, worked at the Portsmouth Gaseous Diffusion Plant near Piketon, Ohio, one of Charles’ drop points. In his interview with Pohlman, Walburn insisted they did “what the federal regulations required us to do.” He did admit some of the shipments likely exceeded permitted radioactivity limits, and said, “I don’t have any proof.” Radioactive material occasionally leaked during transport, requiring the floorboards in trucks to be disposed of. “The metal itself could be cleaned,” Walburn told Pohlman.

If anything, Walburn’s experience reinforces Charles’ concerns about his own safety, and that of other travelers driving right next to such dangerous cargo. Pohlman’s report ends with Andy Charles’ haunting words. “I look back now and I wished to God that I’d never done it.”

Last year, the US Attorney for the Southern District of Ohio, David DeVillers, charged Speaker Householder and four others with racketeering for accepting $61 million in bribes to pass House Bill 6, a bailout measure to save the Davis Besse and Perry reactors. “The conspiracy was to pass and maintain a $1.5 billion bailout in return for $61 million in dark money,” DeVillers said. Householder has pleaded not guilty.

FirstEnergy Solutions, one of Ohio’s largest utility companies, failed for many years to win legislative subsidies to prop up its reactor operations. It turned to bribery to push through House Bill 6, dubbed “the Ohio Clean Air Fund.” In fact it was “a smoke screen for the real purpose: to siphon nearly $150 million annually to FirstEnergy,” DeVillers said. In neighboring Illinois, Commonwealth Edison (ComEd) a subsidiary of Exelon, was also charged with bribing House Speaker Michael Madigan to achieve similar ends. ComEd is paying a $200 million fine to settle the bribery charges.

Reactor operators in New Jersey, Connecticut, and New York have also been gifted with legislative bailouts to keep retirement-age reactors on life support. According to the Public Service Enterprise Group, “Since 2018, three nuclear [reactors] have closed in the eastern US, all for economic reasons, and the impact has had a ripple effect.” As the cost steadily drops for renewable energy sources like solar and wind, they are outperforming the nuclear dinosaurs. However, large utilities and others are heavily invested in old reactors, and are using their political clout in increasingly underhanded ways to keep their income sources in operation. — Reuters Legal, Feb. 1, 2021; Bulletin of the Atomic Scientists, Feb. 12, 2021; Nukewatch Quarterly, Fall 2020, & Augusta Free Press, Sep. 8, 2020

Beyond Nuclear, the watchdog group in Takoma Park, Maryland, filed suit Feb. 10, 2021 to prevent the Nuclear Regulatory Commission (NRC) from permitting a “consolidated interim storage facility” (permanent high-level radioactive waste dump) in Andrews County, Texas. The proposed ground-level storage facility would gather 40,000 metric tons of highly radioactive irradiated waste fuel from US nuclear reactors. Planned by Interim Storage Partners (ISP), the facility would be on the site of an existing “low-level radioactive waste” burial project. The location is near the Ogallala Aquifer, a source of water for many of the High Plains states. Above-ground storage of this waste is dangerous for workers handling or transporting the casks, and for people living along transport routes, and in the dumpsite vicinity where chances of earthquakes, floods, wildfires, and plane crashes all pose accident risks.

Beyond Nuclear’s suit challenges the federal government’s taking ownership of the high-level waste (now owned by private companies) through transportation and storage — ownership that is prohibited by the Nuclear Waste Policy Act prior to the licensing of a centralized national repository. The Department of Energy suggests such a federal site will not be available until 2048. In 2020, the NRC dismissed the waste ownership question by indirectly pushing Congress to alter the Nuclear Waste Policy Act. One of the group’s attorneys, Mindy Goldstein, said in announcing the suit, “The Commission lacks a legal or logical basis for its rationale that it may issue a license with an illegal provision, in the hopes that the ISP or the Department of Energy won’t complete the illegal activity it authorized.… The NRC is not above the law, nor does it stand apart from it.” The final Environmental Impact Statement is expected by July 2021. As license approval hangs in the balance, over 70,000 tons of the high-level radioactive waste fuel is currently stored at US reactor sites, cooled underwater in deep pools, or in concrete and metal “dry cask” containers.

Holtec International, a self-described energy company “widely recognized as the foremost technology innovator in the field of carbon-free power generation, specifically commercial nuclear,” is pushing plans for a “temporary” collection pad for highly radioactive waste from power reactors dubbed “Consolidated Interim Storage.” Targeted for New Mexico, between Hobbs and Carlsbad, the site could potentially hold 174,000 metric tons of highly radioactive waste fuel from nuclear reactors across the US.

Public hearings regarding the Draft Environmental Impact Statement (EIS) switched to online platforms due to coronavirus restrictions, ignoring requests by New Mexico lawmakers to pause the hearings. The move by the Nuclear Regulatory Commission (NRC) potentially shut out dissenters that would have made public their concerns about the proposed facility. Many tribal areas in New Mexico have limited access to the internet. Leona Morgan of the Nuclear Issues Study Group protests this action, calling it “nuclear colonialism.” The EIS is due for release in July 2021.

If Holtec is given a green light, as many as 10,000 heavy waste casks could be concentrated, and the company’s track record is notoriously corrupt. Holtec originally designed storage systems for radioactive waste like the casks that could be used at the New Mexico site. Holtec’s regulatory and criminal violations over 40 years — bribery, tax fraud, and questionable offshore banking among them — should arguably disqualify the company from future government work. But enforcement of regulations is weak.

Elsewhere, Holtec’s improper handling of rad waste also raises alarms. During the movement of waste fuel at the beachside San Onofre reactor site in southern California, a 50-ton canister was nearly dropped down an 18-foot concrete silo. The canister being loaded was thicker than the ones employees practiced with, and the larger size caused the cask to get stuck during placement. Workers allowed the heavy cask to hang unsupported for an hour. For failing to report the potentially catastrophic accident to the NRC, Southern California Edison was fined $116,000.

This incident revealed other problems during loading, namely “scratching or gouging” of canister walls which increases the chances of corrosion in the salty coastal sea air. Donna Gilmore, founder of the premier watchdog group SanOnofreSafety.org, is alarmed by the violations in California Edison’s flawed loading system. Holtec’s operating license prohibits “contact between the canister and the interior of the [ground-level burial silos],” she says. And Gilmore reports, “The NRC admits Holtec is out of compliance, but refuses to cite Holtec for this violation.” To put things in perspective, she says, “Each canister holds roughly the radioactivity of a Chernobyl disaster, so this is a critical issue people need to know about.”