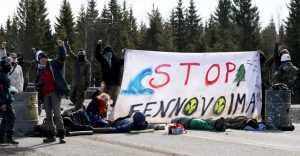 The Finnish group Stop Fennovoima! organized a week of action April 22–May 1, 2016—around the 30th anniversary of the meltdown of Chernobyl—to oppose the construction of the Fennovoima-Rosatom nuclear reactor in northern Finland. Rosatom—the Russian state-owned builder of the Chernobyl reactor—is the largest investor in the Finnish project. Stop Fennovoima’s original protest camp was dismantled in 2015 after an intense six-month occupation. The 2016 week of action involved reestablishing the encampment, workshops, and direct action, bringing construction work to a halt for several hours. Resisters used lockboxes to chain themselves together barricading the road, and one was u-locked to a piece of construction equipment. Police disrupted the nonviolent actions with pepper spray, rubber bullets, Tasers, a canine unit, and arrested 35 activists. Fennovoima-Rosatom managers hope to have the reactor operational by 2024. —Stop Fennovoima, and Reuters, May 29, & Apr. 26, 2016

Trial and More Action Against Trident

In Bangor, Washington, eight activists from Ground Zero Center for Nonviolent Action were sentenced April 1, 2016 to 100 hours of community service that does not involve nuclear disarmament work. On Hiroshima Day, August 6, 2015, the eight crossed the line at Kitsap-Bangor Naval Base, home to the largest concentration of operational nuclear weapons in the US arsenal—deployed on eight giant Trident missile submarines. The action involved spreading ashes around bodies in a die-in and attempting to deliver a letter to the base commander. The letter called for “an immediate halt to the proposed updating and expansion of the Kitsap Bangor Trident fleet under your command.” After the trial one of the activists Rev. Anne Hall reflected, “When Magistrate Chrystel said our community service couldn’t go to work for nuclear disarmament, I wanted to say, ‘Did you hear what we are saying? Does it occur to you that if we don’t avert nuclear war there won’t be any community to serve?’” On Mother’s Day 2016 three more activists were arrested after blocking traffic, holding a sign depicting Father Daniel Berrigan and quoting him, “Know where you stand and stand there.” —Ground Zero Center for Nonviolent Action, May 9 & Apr. 4, 2016

20 Weeks of Peace Actions at Büchel Air Force Base, Germany
Home to 20 US H-bombs

Again this year, the Atomwaffenfrei Büchel (Nuclear-Free Büchel) is engaged in a series of actions to resist the 20 US nuclear weapons stationed at the Büchel Air Force Base, in West-Central Germany. This year’s occupation takes the slogan: “Büchel is Everywhere — nuclear-free now! 20-Week Action Presence in Büchel.” Topping last year’s nine-week protest dubbed “Büchel 65,” this year’s 20-week-long protest began on March 26, the anniversary of the German Parliament’s 2010 resolution to have the missiles removed. The presence is continuing through Nagasaki Day, August 9, with a different organization responsible for actions at the Air Force Base each week. Just outside the gates of the air base, a “Peace Meadow” dotted with banners and disarmament symbols recalls a campaign 30 years ago that successfully ousted 96 US ground-launched nuclear Cruise missiles from Hunsrück, Germany; on Oct. 11, 1986, over 200,000 people marched there against atomwaffen. Today, arts, music, peace, and women’s groups and others have posted dozens of signs and placards near the base’s entrance, clearly visible to passing drivers. The US peace group Code Pink was one of several international organizations that sent representatives to this year’s actions demanding the permanent removal of the United States’ Cold War-era B61 gravity bombs. —Atomwaffenfrei Büchel, May 2016

As we go to press, the group Trident Ploughshares is ramping up a month-long series of actions aimed at disrupting nuclear weapons production at Atomic Weapons Establishment (AWE) Burghfield, just west of London. Groups from across England and Europe, united in opposing the maintenance and updating of warheads destined for Trident submarines in Scotland, said June 8th that their blockades had halted work at the factory for three days. England’s Campaign for Nuclear Disarmament reports that the government’s planned replacement of its four Trident subs, at a cost of $296 billion, could pay for 120 new hospitals and wages for 150,000 nurses, three million affordable homes, installation of solar panels in every home in the UK, or tuition fees for eight million students. While AWE is owned by the British Ministry of Defence, work is contracted out to a consortium of US-owned companies including Serco, Jacobs Engineering, and Lockheed Martin. June’s “Scrap Trident” mobilization follows a February march in London that drew 60,000 people. —Trident Ploughshares, June 1, 2016; Campaign for Nuclear Disarmament, June 2016

Youth between 18 and 26 years are invited to an International Youth Work Camp sponsored by Fellowship of Reconciliation, Germany. It will take place at Büchel Air Force Base July 25 to August 10, 2016. See: https://www.versoehnungsbund.de/sites/default/files/2016-IWC-Einladung-EN.pdf.