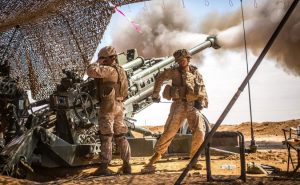 A June 27 Pew Research Center poll says world opinion of the United States has plummeted since Donald Trump took office. Surveying people in 37 countries, 49 percent held a positive view of the United States, down from 65 percent at the end of 2016. Maybe we could cancel the fireworks this 4th of July considering the insensitive symbolism of vicariously enjoying war.

With the Pentagon’s rockets’ red glare and bombs bursting in air smashing seven majority Muslim countries — Afghanistan, Iraq, Libya, Pakistan, Somalia, Syria, and Yemen — negativity toward the United States is easy to understand. US drone attacks originating in Nevada, 7,200 miles from Iraq, and jet fighter-bomber strikes launched from super-carriers in the Persian Gulf are killing hundreds of frightened bystanders month after month. At least 25 civilians were killed in Mosul, Iraq on Sat., June 24 when US bombs destroyed four houses.

Every child killed or maimed by US-made weapons inevitably creates enemies among survivors. President Obama (pronounced “Oh-Bomb-Ah”) made the point himself May 23, 2013 in a speech to National Defense University. He said drone attacks “raise profound questions: about who is targeted, and why; about civilian casualties, and the risk of creating new enemies…” And Obama warned that, “US military action in foreign lands risks creating more enemies.”

Whether bombing civilians only “risks” creating enemies or can be positively guaranteed always to do so, is a matter of opinion. But one need only consider the globalized, mechanized, mass US military reaction to 9/11 — and the country’s demonization of whole groups and religions — to know that demands for revenge, retribution, and retaliation always follow the deaths of innocents.

If your business is peddling weapons, you could be smugly satisfied about every civilian wedding party, funeral procession, hospital, or Sunday market hit by US drones, gunships or F-18s. One StarTribune headline on April 2, 2017 directed attention away from our arms dealers. It read, “Civilian deaths a windfall for militants’ propaganda.” Never mind the windfall for war profiteers.

US offers $6,000 for each dead civilian [sarcasm alert]

In the world of weapons sales, nothing is better for business than TV footage of the anguished and grief-stricken after civilians are indiscriminately attacked by “foreigners.” In the countries being bombed, we are those foreigners, occupiers, and militarists accused of cheapening human lives. You decide: when a US gunship obliterated the hospital in Kunduz, Afghanistan Oct. 3, 2016 killing 42, the Pentagon offered $6,000 for each person killed, and $3,000 for each one injured.

The government and munitions makers say our bombs are saving people by killing terrorists, and — being a world away from the torn limbs, the burning wounds, the screaming parents — Americans want to believe it. The US dropped 26,171 bombs across the seven states during 2016, according to Jennifer Wilson and Micah Zenko writing in Foreign Policy. Each explosion is guaranteed to produce enough newly minted militants to insure steady orders for more jets, bombs and missiles.

Even with a stockpile of 4,000 Tomahawk Cruise missiles, some in the military say the store could be run low by the bombing of Syria, Iraq and the others. “We’re expending munitions faster than we can replenish them,” Air Force Chief of Staff Gen. Mark Welsh told USA Today in December 2015. “Since then, Secretary of Defense Ash Carter has asked Congress to include funding for 45,000 smart bombs in the [Pentagon’s] 2017 budget,” Public Radio International reported in April 2016. And now Trump’s SecDef, Gen. James Mattis has asked for far more in the 2018 budget for what he calls an “annihilation campaign.”

Lockheed Martin Corp. was paid $36.44 billion for weapons in 2015, and $47.2 billion in 2016, according to the Stockholm Int’l Peace Research Institute’s February 2017 report. SIPRI says that half of all US weapons exports in 2015 went to the Middle East. Last May’s $110 billion US sale to Saudi Arabia alone is bound to bring peace and stability to the region. Obama’s $112 billion in arms to the Saudis over eight years certainly did. The Kingdom’s fireworks in Yemen will cause “oooohs” and “ahhhs” of a different sort than our holiday firecracker fakery.

This cheering of faux bombs on the 4th while denying that our real ones produce enemies and prolong the war is why terrified villagers, refugees and the internally displaced of seven targeted countries will go on cringing and crouching over their children as US drones and jets howl overhead. But “Then conquer we must, when our cause it is just, And this be our motto — ‘In God is our trust’ — And the star-spangled banner in triumph shall wave, O’er the land of the free and the home of the brave.” —John LaForge