Majority owner Southern California Edison, a subsidiary of Edison International, announced the permanent closing of its San Onofre Nuclear Generating Station north of San Diego June 7, after elaborate attempts to resuscitate its two aging reactors failed. The two reactors are the third and fourth out of five to close in the past seven months in the US as several factors — including old and faulty equipment, public opposition and competition from renewables — combine to make nuclear power increasingly unviable. Reactors at Crystal River, Florida, and Kewaunee, Wisconsin, were shut down earlier in the year, and Entergy recently announced it would close Vermont Yankee by the end of 2014.

The San Onofre reactors were taken offline in January 2012 when tubes in their newly-installed replacement steam generators began to leak. Built in 1968, the reactors’ original steam generators were supposed to last until its operating license expired in 2022, but like those in many other nuclear power facilities from the same era, the tubes in the original steam generators corroded more than a decade early. After Edison threatened a serious blow to the electric grid if San Onofre shut down, and after its promise of decades of “cheap, reliable energy,” the company convinced the state Public Utilities Commission and two of its three co-owners (the City of Riverside and San Diego Gas & Electric) to approve a steam generator upgrade in 2004. The city of Anaheim then dumped its 3% ownership stake in the reactors, citing serious concerns about the investment. The remaining owners invested over $700 million in a contract with Mitsubishi Heavy Industries to build the new generators. 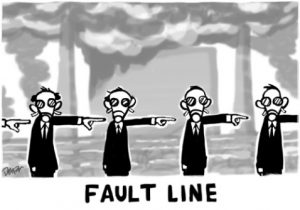 Although Mitsubishi had constructed steam generators for other aged reactors, it never built any as large as those at San Onofre — each the size of an eighteen-wheeler, weighing 620 tons, and containing over 9,000 tubes. Initial concerns about excessive vibration of the replacement tubes, which would cause them to wear too quickly, were assuaged when Mitsubishi upgraded the metal alloy used to make them and placed 377 additional tubes in each generator. After several other problems and delays, Edison celebrated the installation of the new generators in February 2011.

The following January, a routine inspection revealed unusual wear in 1,595 generator tubes. Then, not long after they were supposed to have been repaired, one of the tubes sprang a leak. Independent reports later noted that plastic bags, masking tape and broomsticks had been used in a temporary fix. Further inspections revealed serious problems with the new tubes and, fearing a Fukushima-scale disaster, operators pulled both reactors offline at an ongoing operating loss of $1 million per day.

Last June, the Nuclear Regulatory Commission (NRC) concluded the problems were ultimately rooted in a single incorrect measurement in Mitsubishi’s modeling code, which caused them to grossly underestimate the rate at which steam would flow through the tubes. In October 2012, Edison asked the NRC for permission to restart Unit 2 at 70 percent power to test the theory that a reduction in power would mean a reduction in vibration and damage. Meanwhile activists with Friends of the Earth, the Natural Resources Defense Council and other groups lobbied for the reactors’ permanent closure, enlisting support from Senator Barbara Boxer, D-Calif., and Representative Ed Markey, D-Mass. They argued that the NRC had allowed Edison to change the design of its steam generators without following the license updating law, which requires public hearings and rigorous accountability measures.

In a May victory for the critics, the Atomic Safety and Licensing Board, the NRC’s judicial review body, ruled against Edison’s defense of its faulty new steam generators. Then, rather than go through proper license change procedures, Edison decided to make the shutdown permanent.

Since the closing, both Edison and San Diego Gas & Electric have sued Mitsubishi for damages related to the faulty equipment it delivered. Mitsubishi maintains that its contract includes a $137 million cap on its liability.

Edison estimates that decommissioning both reactors will cost $4.1 billion, and since March 31 it has already collected $2.7 billion from rate payers through a special decommissioning trust fund. On Aug. 13, the Los Angeles Times published a full page letter from Edison to its customers promoting justifications for its plan to seek the remaining decommissioning funds from them — rather than the company’s shareholders. Ultimately, the California Public Utilities Commission will decide who should pay the price for cleaning up Edison’s radioactive legacy.