“Beauty will save the world.” — Prince Myskin, in Dostoevsky’s The Idiot

“He is not resting. He is watching. He is waiting, he’s expecting justice.” — Arizona Daily Star, Ernesto Portillo

One night their faces appeared on the wall of an abandoned building on Congress Street, a few blocks from the federal courthouse. No apparition. No desert mirage. Simply portraits of Jose Antonio Elena Rodriguez and Brisenia Flores. The artists are anonymous, or rather, the images are the author’s. Their mere appearance bespeaks an innate authority.

In October 2012, US Customs and Border Patrol (CBC) agents shot 16-year-old Jose Antonio Elena Rodriguez in the back seven times through the border fence. Jose, from Nogales, Sonora, was carrying a pizza home for dinner. No charges have been lodged against the agents involved. Jose is one of 19 individuals killed by CBC agents in the past two years. Now, day and night, Jose’s plaintive, piercing eyes watch the passers-by on Congress St. His eyes expect justice. They demand it. 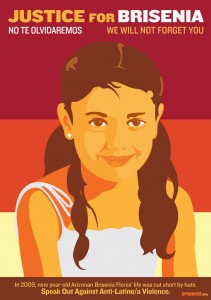 Early on a Sunday morning in May 2009, a self-avowed white supremacist and accomplices broke into 9-year-old Brisenia Flores’ home near the US-Mexico border. They shot Brisenia and her father while allegedly seeking drugs. None were found. The portrait of her young smile presses a simple query: “Why?”

The suffocating silence of apathy is shaken by these images in the shadow of the federal courthouse. Their appearance puts paint to poet Langston Hughes’ dictim, “Justice delayed is justice denied.” Art becomes a public indictment. The victims and their survivors will not rest until justice is served.

I embroider letters, I stitch stories. I stitch you and I stitch me to you, dead countryman. — From The Eye of the Needle, by Beatriz Iturribarria

More than 90,000 people have been killed in Mexico alone in the US-Mexico drug war. Another 20,000 are missing. In 2011, a handful of individuals in Mexico City formed the “Fuentes Rojas Group” (Red Fountains). They sought to raise visibility of this war by creating a memorial for every single victim. The name of each victim is hand-embroidered on starch white handkerchiefs in blood red thread. The Fuentes Rojas Group’s premier project is called “Bordando por la Paz” (Embroidering for Peace). These handkerchiefs are displayed in art-based public events. According to a Fuentes Rojas statement, the symbolic actions “promote peace, human dignity, justice and solidarity. Their goal is to empower the ability of citizens to act collectively by means of shared responsibility and meetings between people.”

In a public demonstration decrying the drug war violence, the first 3,000 kerchiefs were displayed last year adjacent to the Zocalo, or Plaza de la Constitución, in the heart of historic Mexico City. The exhibit is slated to travel to Paris and beyond. Many names are yet to be added and the list grows daily.

The embroidering is done privately and in small groups, communally. I’m reminded of Gandhi’s “constructive program” and the spinning wheels. The Indian cloth had both a symbolic and pragmatic impact. The embroidery has symbolic and political power.

“The creator asked all of the animals to watch and stay awake for seven nights. On the seventh day, only the owl and the panther were still awake and because they did not succumb to sleep, they were given the power to see in the dark.” — Cherokee creation story (adapted)

“Escaping machine guns, bullets, hunger, running from place to place. Seeing people get killed and sleeping with my shoes on. That was my childhood.” — Wendy, from Guatemala

Wendy’s self portrait of a blindfolded girl is one of the paintings currently being exhibited at the Tucson Art Museum’s unusual installation “The Museum as Sanctuary: Giving Voice to Tucson’s Refugees.” Wendy is a member of the Owl and Panther Project of the Hopi Foundation. For three years, youth and elders, many of them survivors of refugee camps and torture, have been putting their stories to canvas and parchment. Paint has been like an ointment; water colors a soothing balm. Now their works are on public display alongside the classics.

Nada, another one of the artists, wrote, “My painting expresses my dark feelings about what has happened to me.” Another, Patty, wrote, “My self-portrait was painted with my eyes closed because I want to be. I want to dream, just breathe…” And now she can, in primary colors, in public view.

The Cherokee creation story, after which Owl and Panther takes its name, is mirrored in the lives of people who have found sight through the darkness. They have an acuity that penetrates the violence of their experiences, and moves them from victim to survivor — to artist. Their works reveal a restored humanity in brilliant colors and in black and white sketches. <owlandpanther@hopifoundation.org>

Art is its own language. Its grammar circumvents the intellect and gets to the heart of a matter. History is rife with examples: From cellist, Vedran Smailovic playing Albinoni’s “Adagio in G Minor” amidst exploding bombs during the siege of Sarajevo, to the poetry of Neruda in exile; from the scratch board images created by Nukewatch co-director Bonnie Urfer in myriad US prisons and jails (using contraband materials), to the watercolors that Liz McAlister of Jonah House in Baltimore sent daily to her children from Alderson Federal prison camp during an 18-month sentence.

Art and justice go together hand-in-hand. The cauldron of our imaginations — when expressed on canvas or a handkerchief or watercolor paper, on abandoned building walls and urban bridges, in iambic pentameter or a musical score — nurtures and restores the human spirit. It challenges the regimes of domination.

Artists take Gandhi’s constructive program to another level they call a “re-construction program.” Without beauty, to invert Dostoevsky’s insight, the world cannot be saved. After dismissing Prince Myskin’s insight for years, Aleksandr Solzhenitsyn in his Nobel lecture noted that it is not a careless phrase but a prophecy. Art transforms the status quo and revolutionizes it — creatively. Despite all, it is beauty that will save the world.

— John Heid lives and works at the Casa Mariposa Community in Tucson, Arizona.