Editor’s note: Korea scholar Bruce Cumings teaches at the University of Chicago and is the author, most recently of, The Korean War: A History. Professor Cumings was interviewed on Democracy Now November 10. A partial transcript of his remarks follows.

Bruce Cumings: “Pyeongtaek, South Korea is the largest military base in the world outside the United States. The US has operational control over 650 thousand South Korean soldiers. Yet National Security Council head General McMaster chided South Korea for ‘not protecting its sovereignty’ over a deal South Korea made with China” just before Trump’s arrival.

“In what is likely the most important event of Trump’s Asia junket, China and South Korea agreed that there would be no more anti-missile batteries installed in South Korea. And South Korean president Moon Jae-in said explicitly that he would not join an alliance of the US and Japan, whether it’s targeted at China or anywhere else. [President Moon] pointedly said ‘the US is an ally,’ (we have a mutual defense treaty with Korea) ‘Japan is not an ally.’

“He or his staff brought a ‘comfort woman,’ 88 years old, in other words a sex slave of the Japanese Army, to meet with Trump when he was in South Korea. The Japanese weren’t too happy with that.

“But it’s absolutely ridiculous that the US keeps trying to knock together a tripartite alliance between Japan, South Korea and the US, when relations between Korea and Japan are still as bad as they are and Japan has never really issued a proper apology for putting more than 100,000 Korean women into sex slavery….

“There’s no military solution in North Korea. What would solve the problem … is for the US to agree to freeze its own huge military exercises in South Korea, in return for a freeze on North Korean testing of its missiles and atomic bombs. This is a so-called ‘freeze for freeze’ proposal that, for example, former Secretary of Defense William Perry supports. [China and Russia have jointly proposed such a freeze.]

“It’s not clear that North Korea supports it, but we haven’t tried. Then, once that freeze is in place, to open diplomatic relations with North Korea.

“Diplomacy is not something you do among friends. Diplomacy arose in world history to deal with enemies. We’ve had no diplomatic relations with North Korea for 72 years, and it hasn’t hurt them any more than the sanctions. … If the US sent an ambassador to Pyongyang it could finally gain some influence over the regime. North Korea has wanted diplomatic relations for 25 years.

“North Korea is building toward an end-point that is coming soon. This is a clear signal that North Korea would like to begin diplomatic relations. Its last [bomb] test was Sept. 15.

“When you put these relatively modest steps alongside the catastrophic nature of a new war in Korea, it seems to me the overwhelming choice.”

In an address to the UN General Assembly Sept. 19, Trump issued a bald threat to “totally destroy” North Korea, a nation of 25 million people. The obscenity drew audible gasps from UN delegates. Elsewhere, Trump has raged about being “locked and loaded” and bringing US “fire and fury” against the North.

In the same speech Trump sounded like critics of his own White House, warning “If the righteous many don’t confront the wicked few, then evil will triumph.”

In response to his UN harangue, North Korean President Kim Jong-un said Mr. Trump was a “mentally deranged US dotard.” Christopher Hill, a former ambassador to South Korea told The New York Times, “The comments give the world the sense that [Trump] is increasingly unhinged and unreliable.” One month earlier, after a July 20 meeting at the Pentagon where Trump called for a tenfold increase in US nuclear weapons, Secretary of State Rex Tillerson called him a “fucking moron,” NBC News reported.

In November, the dotard reversed himself while visiting South Korea, saying it would be in the North’s interest to “come to the table and make a deal.” Any US attack on the North would endanger millions of South Koreans, 38,000 US military, and 57,000 Japanese citizens living there.

To most observers, it is absurd to believe that the North would fire a nuclear weapon at the US without first being attacked. “The view that North Korea would start war to communize Korea [as some in the White House believe] doesn’t make sense anymore,” Kim Yong-hyun, at Dong-guk University in Seoul told the press, “North Korea knows that if it ever uses a nuclear weapon, it means self-destruction.”

North Korea believes that giving up its nuclear weapons would invite a US invasion, like the unprovoked US attacks on Iraq and Libya after they eliminated their warheads. Even National Intelligence Director James Clapper said last year that the North thinks its nuclear weapons are “their ticket to survival.” 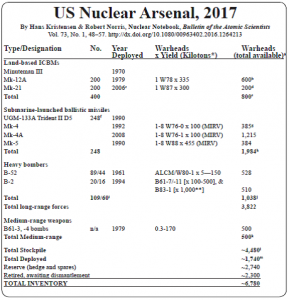 Acronyms: ALCM: air-launched cruise missile; ICBM: intercontinental ballistic missile; LGM: silo-launched ground-attack missile; MIRV: multiple independently targetable reentry vehicle; UGM: underwater launched ground-attack missile.
a) This Notebook lists total warheads available.
b) Roughly 200 of these are deployed on 200 Minuteman III missiles equipped with the Mk12A [warhead]. The rest are in central storage.
c) The W87 was initially deployed on the MX missile in 1986 but transferred to the Minuteman in 2006.
d) There are a total of 540 W87s in the stockpile. The 200 Mk21-equipped ICBMs can each carry one W87. The remaining 320 W87s are in storage.
e) Of these ICBM warheads, 400 are deployed on operational missiles and the rest are in long-term storage.
f) The Navy is reducing the number of missile tubes on each nuclear-powered ballistic missile submarine (SSBN) from 24 to 20. As of early 2017, the force included 10 SSBNs with 20 tubes each and two SSBNs with 24 tubes each, for a total of 12 deployable submarines. Two additional submarines, each still with 24 missile tubes, are in refueling overhaul. They are not available for deployment and not assigned nuclear weapons.
g) All W76-0 warheads have been replaced on SSBNs by W76-1 warheads but several hundred are still in storage and more have been retired. When the W76-1 use-extension program production is completed in FY 2019, the remaining W76-0 warheads will be scrapped.
h) Of these submarine warheads, approximately 890 are deployed on missiles loaded in SSBN launchers.
i) The first figure is the aircraft inventory, including those used for training, testing, and backup; the second is the portion of the primary-mission aircraft inventory estimated to be tasked for nuclear [war planning]. As of September 2016, nuclear-[armed] bombers counted under New START included roughly 70 B-52s and 20 B-2s.
j) Of these bomber weapons, only about 300 are deployed at bomber bases. This includes an estimated 200 ALCMs at Minot Air Force Base, ND, and approximately 100 bombs at Whiteman Air Force Base, MO. The remaining 738 weapons are in long-term storage. B-52s are no longer tasked to deliver gravity bombs.
k) Roughly 150 B61-3 and -4 bombs are deployed in five European countries and the rest are in central storage in the United States.
l) This includes 4,322 warheads for the operational forces (listed above) plus roughly 160 spare warheads (part of the reserve).
m) Deployed warheads include approximately 1,290 on ballistic missiles (400 on ICBMs and 890 on submarine missiles), 300 weapons at heavy bomber bases, and 150 midrange B61 gravity bombs deployed across five European countries. Another 320 bombs are in storage in the United States, for a total estimated inventory of 500 B61s.
* The bomb used by the United States on Hiroshima in 1945 was about 15 kilotons.
** The B83 is a 1,000 kiloton (1 “megaton”) bomb, 66 times the force of the Hiroshima bomb.