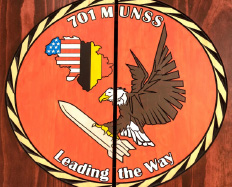 With a U.S. flag imposed over half of Belgium, the insignia (above) of the U.S. Air Force’s 701st Munitions Support Squadron, was mistakenly posted on social media. The 701st maintains twenty or so U.S. B61 hydrogen bombs stationed at Kleine Brogel airbase in Belgium. While the transfer of nuclear weapons to other countries is never officially acknowledged by the United States or their NATO recipients, the insignia graphically boasts that U.S. bombs are part of the Belgian airbase’s arsenal. The “open secret” of U.S. nuclear weapons being stationed at five European countries has often been accidentally revealed, made public in the press, and acknowledged by host country parliamentarians.

“Within the context of NATO, the United States deploys approximately 150 nuclear weapons in Europe, most notably B61 free-fall bombs, which can be deployed by both US and allied aircraft. These bombs are stored in six American and European bases: Kleine Brogel in Belgium, Büchel in Germany, Aviano and Ghedi-Torre in Italy, Volkel in the Netherlands and Inçirlik in Turkey.” [From the official statement of the NATO Parliament.] (De Morgen).