Once again corporations get favors when they fail. Westinghouse Inc., maker of the untested AP1000 reactor design, declared bankruptcy March 29, choosing to restructure due to “certain financial and construction challenges.” Its reactors under construc­tion in Georgia and in South Carolina were supposed to be producing electricity by now. Instead they’re running $12 billion over budget and three years behind schedule. Thanks to $4.5 billion in ratepayer financing in South Carolina, $3.9 billion in Geor­gia, and an $8.3 billion fed­eral loan guarantee authorized by the Department of Energy, the financial picture for West­inghouse, its parent company Toshiba and the state utili­ties Southern Company and Scana Energy, isn’t as bad as it should be.

Nuclear industry lobbyists and their campaign donations guarantee close ties between the government and the nuclear industry which has always relied on tax­payer subsidies. Despite being hugely unprofitable, it survives. Last August, taxpayers in New York were roped into paying a $7.6 billion to bailout that will benefit Exelon, Entergy and the French firm Elec­tricité de France. Illinois taxpayers are on the hook for a $2.34 billion bailout of Exelon. FirstEnergy is looking to rake in an additional $1.2 billion from the taxpayers of Ohio, even after vocal opposition dur­ing legislative testimony in May prompted delibera­tions to be suspended. Similar legislation to support reactor bailouts is in the works in Connecticut, New Jersey, Texas, Maryland, and Pennsylvania. 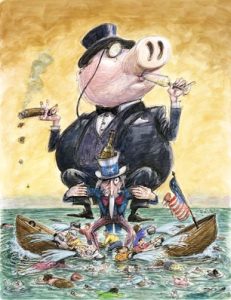 The nuclear industry cannot survive indefinitely. France’s nuclear giant Areva has reported financial losses in the billions which, along with the rest of France’s nuclear industry, could cost French tax­payers over $10 billion. Toshiba, has announced that it will not be building any more reactors; its nuclear sector has reported a loss of $6 billion, and that could go up to $10 billion. The near future of nuclear power would appear gloomy if it weren’t for its true saviors, the taxpayers, who will never have the clout of a nuclear lobbyist.

The $8.3 billion federal loan autho­rized for Georgia by the DOE has barely been mentioned in main­stream media, while the “inexcus­able” 2011 loan guarantee given to the solar power company Solyndra, which later failed, was covered ex­tensively and called “scandalous” by the Washington Post among others. The Westinghouse loan was 15 times bigger than Solyndra’s. Odds are that taxpayers won’t get that federal loan money back.

The Westinghouse bankruptcy is just another sign of industry decline. Twelve reactor closures have been announced since 2015, although five of them have been reversed by bailouts. The speed of the decline will depend on how much the nuclear industry is cushioned by a plush, socialist-style welfare system draining the treasury, while the rest of us are subject to free market capitalism.