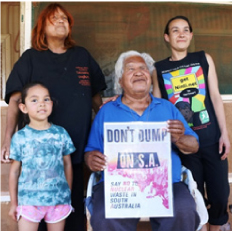 A Citizen’s Jury in South Australia delivered a blow to a plan to construct a radioactive waste dump in their state. Importing 138,000 metric tons of high-level radioactive waste and 390,000 cubic meters of intermediate level nuclear waste had been among government recommendations in a report by the South Australia Nuclear Fuel Cycle Royal Commission. Premier Jay Weatherill convened a citizen-led jury to gain public input into the proposal. A majority of the jury members voted that “under no circumstances” would they support importing the waste. “This is a strong decision from a randomly selected and very diverse group of South Australians who have had the benefit of studying the Royal Commission Report … It was positive to hear the jurors acknowledging the need for [Aboriginal] Traditional Owner’s voices to be heard,” said the chairperson of Yankunytjatjara Native Title Aboriginal Corporation, Karina Lester (above left in photo).

Two primary concerns emerged as reasons for opposition to the dump: mistrust of the government, and lack of aboriginal consent. Some of the jury felt as if they were part of a process that was created to manufacture consent for the Royal Commission recommendations. Conflicts of interest were apparent when the government appointed nuclear advocates to head the Royal Commission who, in turn relied solely on a report co-authored by a pro-nuclear lobbying group ARUIS (Association for Regional and International Underground Storage).

Premier Weatherill is expected to decide on whether to respect the Jury’s verdict by the end of this year. “There’s no doubt that there’s a massive issue of trust in government, I could sense that,” he said. “That’s why we started the whole citizen’s jury process, because there is no way forward unless we overcome those issues.” His decision will have an impact on whether the mistrust of the government is affirmed.