Following last April’s Husky Energy oil refinery explosion, fire, and resulting evacuations, it took a year for Husky to officially declare its intention to continue the use of hydrogen fluoride (HF) at its Superior, Wis. operations. In its Apr. 3rd announcement, the Canadian company said it would keep using the deadly chemical and upgrade some safety features.

HF is a contact poison capable of causing blindness, cardiac arrest and even death from fluid buildup in the lungs. Swallowing only a bit may be fatal. HF burns through skin, eyes, lungs and the GI tract, and seeks the bones. HF even interferes with nerve function, so symptoms of exposure may not be immediate, and HF burns may not initially be painful.

The April 26, 2018 explosion “was felt for miles” according to the Mpls StarTribune. The blast was so violent that shrapnel from the explosion was blown 200 feet, according to an August 2, 2018 Factual Update by the US Chemical Safety and Hazard Investigation Board, “puncturing the side of [a] steel tank and spilling over 15,000 barrels of hot asphalt into the refinery.” How much “over 15,000” the update didn’t say. This liquid asphalt caught fire around 12:15 p.m. and burned for nine hours.

An evacuation order covering a 3-mile radius around the refinery, and a 10-mile down wind rectangle to the south, was imposed to get people away from the fire’s plume of toxic smoke and from a possible leak of the HF. Luckily, no HF was dispersed by the explosion and fire, and the evacuation order was lifted at 6 a.m. the next day.

To extinguish the asphalt blaze, fire retardant containing dangerous compounds was used in large quantities. Consequently, “Water has shown trace amounts of perfluoralkyl sulfonate, a chemical found in firefighting foam…,” the Duluth News Tribune reported on May 7, 2018. Exactly what water, the paper didn’t say. Was it in St. Louis Bay, firefighting runoff, the sewer system, nearby Newton Creek, all of the above?

Perfluoralkyl sulfonate is one of some 3,000 infamous per- and polyfluoroalkyl substances, or PFAS. PFAS are a kind of poison known as “forever” or “persistent” chemicals because they don’t break down in the environment. Under the title, “Risk Management for Per- and Polyfluoroalkyl Substances (PFAS)”, the US Environmental Protection Agency (EPA) says it is “particularly concerned” about PFAS chemicals because they “are persistent in the environment, bio-accumulative in wildlife and humans, and are toxic to laboratory animals and wildlife, producing reproductive, developmental, and systemic effects in laboratory tests.” 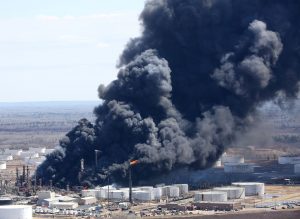 Nevertheless, EPA still allows widespread use of PFAS contaminants even though Harvard scientists say in a 2015 study that an infinitesimal amount — “one part-per-trillion (ppt)” — is likely to be harmful to human health. The study reported that “existing drinking water limits … may be more than 100-fold too high.” Researcher Pat Elder with CivilianExposure.org, told Nukewatch on April 23, “Trace amounts of PFAS can cause miscarriages, testicular cancer, and have been linked to liver and kidney cancers.”

Last October, the Occupational Safety and Health Administration cited Superior Refining Company LLC for eight serious violations of OSHA’s process safety management procedures including failing to control the use and release of highly hazardous chemicals. The company was fined $83,150. The fine adds to a long record of bad faith by the refinery: in 2008, then owner Murphy Oil paid a $179,000 fine for safety violations including the switching off of hazard alarms; in 2015 new owners Calumet was fined $16,500 for breaking rules regarding flammable liquids, hazardous waste and emergency response.

That Was Then: Officials Once Demanded Alternatives to Hydrogen Fluoride

Not much attention has been paid to PFAS since it was found in the water. The focus of EPA, OSHA, the Chemical Safety and Hazard Investigation Board, and the cities of Superior and Duluth has been Husky’s hydrogen fluoride danger. On May 1 last year, Superior Mayor Jim Paine and Duluth Mayor Emily Larson both called on Husky Energy to stop using the HF. US Rep. Betty McCollum, D-MN, chimed in last May 9, calling on Marathon Petroleum in St. Paul Park to stop using HF. Husky waited until this month to say it’s sticking with HF.

After initially noting some disappointment, Mayor Paine told Nukewatch over the phone that he was now satisfied with assurances made by Husky that planned improvements will make its use of HF safer. Mayor Larson issued a statement around April 3 saying she was frustrated and angered by the decision. “I recognize that alternatives to [HF] may be more complicated, and more expensive, but those reasons pale in comparison to the potential devastation this choice can cause” which, Larson wrote, “unacceptably elevates danger to our environment and our people.”

Local activists with the group Twin Ports Action Alliance have planned several events this weekend marking the shocking event’s first anniversary. Many questions still demand answers: How many wells were tested? To what depth were the wells tested (600 feet may be clear, while 150 feet may not). Where were the testing wells? What amounts of PFAS were found? Did the equipment detect 1 ppt, or does not find less than 100 ppt? Were individual homeowners’ wells tested? Has a plume of PFAS extended from the source? How Far? What is the direction of groundwater flow? Is the municipal water supply system tested for PFAS?  Was the sewer system contaminated? Is the sludge being tested for PFAS? Inquiring minds want to know.