Though the transition from nuclear- and fossil-fueled to renewable electricity sources has the potential to address two imminent catastrophes facing the human race—radioactive contamination and climate change—several hurdles have stood in the way of a full-out energy revolution. Soon, Tesla Motors, Inc. may be breaking one of these barriers, unveiling new battery technology that allows for efficient storage of energy produced by renewable technologies—such as photovoltaic solar collectors and wind turbines.

On February 11, Tesla CEO Elon Musk announced the company’s new project in a conference call. “We are going to unveil the Tesla home battery, the consumer battery that would be for use in people’s houses or businesses fairly soon,” Musk said.

Musk added that he expected to introduce the new battery within two months. “We have the design done, and it should start going into production in about six months or so.” 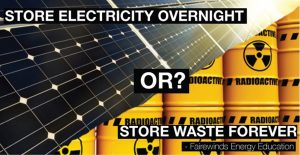 Already known for its all-electric Model S sedan, Tesla is an established leader in lithium-ion battery technology. Musk is also the chairperson of SolarCity, which has successfully pioneered a residential rooftop solar installation strategy that allows people to lease photovoltaic panels for less than their regular electricity bill. Musk has promised that residential SolarCity units would come with battery storage within five to 10 years, enabling customers to more easily live “off-grid.” This kind of solar power, he said, would be cheaper than natural gas (and thus much cheaper than nuclear, which is struggling to cut costs in the face of booms in “fracking” gas extraction and clean energy).

Enabling the average homeowner to access viable electricity through a combination of rooftop solar power and efficient battery storage could pose a major threat to electric utilities, which have been slow to move away from “base load” power sources like coal and nuclear. Production facilities that use these dirty fuels are slow to start up and shut down, meaning they’re not compatible with more intermittently-produced renewable sources on an electric grid. Efficient energy storage, like a Tesla battery, could put the final nail in the coffin of archaic base load electricity generators.

Some utilities and states have adopted a process of “net metering,” which allows producers of home solar and wind power to sell excess electricity back through the grid. (The Nukewatch office and the Plowshares Land Trust is now electrified this way using the 10,000 watt, grid-tied solar panel system we installed in 2013.])

Others—motivated by nuclear industry lobbyists to artificially make nuclear power appear competitively priced—are causing outrage among their customers by trying to lower the rates at which they buy net-metered renewable energy or even fully eliminating net-metering. With new battery storage technology, these customers could have the option of walking away from their utilities altogether.

But many experts have argued that renewable energy production and storage will work most efficiently on a grid of significant scale, with many distributed production sources, flexible storage options, and consumer-level efficiencies. There is a role for utilities in this emerging energy system, if they are able to adapt quickly enough to fill it. Both Tesla and SolarCity do extensive outreach to existing utilities. But there is no role for nuclear or coal-based power—at least not within a society that values its own well-being.

Some may question whether a market-based corporate technology can really solve our energy problems, which arguably have been caused by the greed of other corporations (along with the failure of public policy to regulate them). Indeed, if their common vision is realized, Tesla and SolarCity will largely control markets for electricity-producing solar panels, the batteries that regulate energy storage, and the electric cars powered by renewable electricity. But in the face of a nuclear industry that insists on operating its aging reactors at full capacity even in the wake of a global disaster like the one at Fukushima—not to mention a fossil fuel industry that is irreversibly destroying our planet’s ecosystem through climate change—the rise of a dominant renewable energy industry might feel like a breath of fresh air.