Through the prism of nonviolence 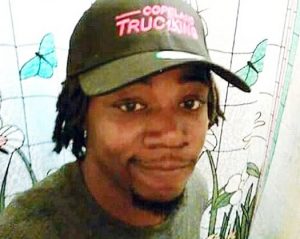 Jamar Clark, 24, was shot and killed Nov. 15, 2015 by Minneapolis police officer Dustin Schwarze while officer Mark Ringgenberg held him on the ground. No criminal or civil charges were brought against the officers. In June his family filed a federal lawsuit against the officers saying the police subjected Clark to unreasonable seizure and excessive force.

— Excepted from “The Trouble with Our State” by Daniel Berrigan

“I am troubled by the ongoing civil disobedience.”

The verdict in most political trials is usually anticlimactic. The heart of such trials lies in our testimony, and, once in a blue moon, in a prosecutor or judge’s statements. Every now and then a ray of light makes its way through the decorum into the “halls of justice.” This actually happened in Hennepin County District Court in late March when Eddie Bloomer of the Des Moines Catholic Worker and I were tried on charges stemming from an April 2016 Black Lives Matter/Catholic Worker action in Minneapolis.

My defense to the charges of trespass and obstruction of transit was based on my claim of right to stand precisely where I did, in front of a Metro Transit light rail vehicle, in order to raise awareness and create a tension that would pressure Minneapolis police to address their lethal policies and practices toward people of color. Our vigil focused particularly on the murder of an unarmed young man, Jamar Clark, who was shot in the head by a Minneapolis police officer. The investigation into Jamar’s killing was closed earlier in the year by the Minneapolis Police Department without charges against the officer involved.

Dr. Martin Luther King, Jr. carefully laid out the rationale for the practice of creative tension in his “Letter from a Birmingham Jail.” I referenced this hallowed letter in laying out my “claim of right” defense. Throughout the three-day trial presiding Judge Christian Sande paid careful attention. Then during pre-sentencing remarks he gave a stern, thought- provoking rebuke to the rationale for my defense. He began by saying: “I am troubled by the analogies that I see—particularly, the Letter from a Birmingham Jail…. Dr. King talks about constructive tension. But again, the constructive tension he was citing in the Letter… had to do with a direct challenge to an unconstitutional law and a public sentiment that supported that unconstitutional law. This (Eddie’s and my cases) was much more amorphous and so it’s much harder for the community and the Court in a situation like this to really do much to address the issues.”

Judge Sande’s comments are a rare courtroom gift. They summarize the mindset of status quo “liberal ideology—for the record. True, we were not protesting the trespass laws or the right-of-way for public transit. What we were protesting was the violation of Jamar Clark’s constitutional right to due process, civil and human rights, and to a fair trial by a jury of his peers. A Twin Cities police officer had robbed him of these rights by playing the roles of accuser, prosecutor, judge, jury and executioner. In a single irretrievable moment in time.

With a bullet. There is no appellate court for Jamar, let alone a trial. This killing was not an isolated incident in the Twin Cities or in our country for that matter. It is a nation-wide matter of fact and an epidemic.

Our vigil followed carefully what Dr. King laid out from his Birmingham jail cell. He wrote: “Its (Birmingham’s) ugly record of police brutality known in every section of this country.” Minneapolis’s track record of death-by-cop is not so widely published, but is well known in the black community. Dr. King was labeled an outside agitator. Yet he had local ties. We, catholic workers were invited to the Twin Cities by local human rights workers including people of color. Regardless, Dr. King reminded us from his cell that, “Injustice anywhere is a threat to justice everywhere. We were victims of a broken promise… and the dark shadow of disappointment settled upon us. So we had no alternative except for that of preparing for direct action.” In Minneapolis the investigation into Jamar Clark’s murder closed without charges. Negotiations had failed.

Judge Sande’s comments articulate the point of view that believes the system can self-correct by means of checks and balances, by petitions, sanctioned rallies, town hall meetings, and the ballot.
These activities do not change the fundamental character of the system. They don’t rock the boat. Activist Philip Berrigan called these “acts of consent. Ones that go along with business as usual.” The difference between consent and dissent lies in whether one believes that the system is fundamentally just—or not. The principle attitude underlying our direct action in Minneapolis was
dissent, challenging the system at its roots, which is what radical means. Dissent recognizes that the system is in need of radical transformation. Dr. King reminds: “My friends, I must say to you that we have not made a single gain in civil rights without determined legal and nonviolent pressure. History is the long and tragic story of the fact that privileged groups seldom give up their privileges voluntarily.” Howard Zinn wrote in his A Peoples’ History of the United States that no social change has occurred in this country without both consent and dissent.

Two more black men were killed by Twin Cities police officers between the time of our vigil and our trial.

I close where I began with Daniel Berrigan. In the early 1970s, he and exiled Vietnamese Buddhist monk Thich Nhat Hahn shared a series of midnight conversations in Paris. These were printed in The Raft Is Not The Shore. Daniel said: “But nothing is understandable while it’s going on—the sixties are only understandable when they’re over, which makes most people into morticians—ready to bury the dead. But it costs something to say while the killing is going on, ‘No one should die!’ And the killing is going on.”

Over the past 10 years, 100 percent of the people killed by the Minneapolis Police Department have been black or brown. I rest my case. Again.