Three days after the Jan. 13 false alarm in Hawai‘i, Japan’s public TV broadcaster NHK issued its own false alarm Jan. 16 around 7 p.m., warning falsely that North Korea had launched a missile at Japan.

The shocking message was received by Japanese smart phone and NHK TV website users. Like in Hawai’i, Japanese viewers were terrified to read, according to a translation from Reuters:

“NORTH KOREA APPEARS TO HAVE LAUNCHED A MISSILE. THE GOVERNMENT URGES PEOPLE TO TAKE SHELTER INSIDE BUILDINGS OR UNDERGROUND.” 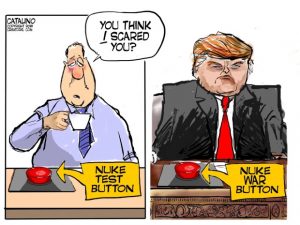 Unlike Hawai‘i’s error, which threw the state’s population of 1.4 million into a panic, NHK’s fake news was broadcast nationwide across Japan, a country of 127 million people.

In Arsenals of Folly, author Richard Rhodes documents how US government “officials frequently and deliberately inflated their estimates of military threats facing the United States, beginning with … exaggerated Soviet military capabilities.” A review in the Feb. 7, 2008 New York Review of Books said, “The exaggeration of foreign threats, however pernicious, is a tactic,” and quotes Rhodes’ study: “Threat inflation was crucial to maintaining the defense budgets… Fear was part of the program …”

As with most major news organizations, National Public Radio failed to provide any analysis regarding what North Korea could hope to gain by attacking Japan or the US.

Japan’s false alarm, which the broadcaster blamed on a “switching error,” was corrected in less than 10 minutes, and evidently did not cause the sort of panic and chaos that was seen across Hawai‘i. “This happened because equipment to send a news flash onto the internet had been incorrectly operated. We are deeply sorry,” NHK announced on its 9:00 p.m. news program, Reuters reported.

The Reuters report of Japan’s false notice of a North Korean attack continued in this vein, noting: “The mistake took place at a tense time in the region following North Korea’s largest nuclear test to date in September and its claim in November that it had successfully tested a new type of intercontinental ballistic missile that could reach the entire US mainland.”

During shooting wars in Vietnam, Iraq and Afghanistan, and throughout the Cold War, the US public has often learned after-the-fact that well-publicized threats or provocations were unreal, notably the famously false Gulf of Tonkin incident in 1964 which led to the US invasion of Vietnam, and the US’s fake reports of Iraq’s weapons of mass destruction that led to the 2003 invasion.

Likewise, in 1988, wire services reported that, “The Soviet Union is highly unlikely to launch a sudden military attack on NATO forces in Europe, despite Western military leaders’ fear about a Pearl Harbor-type strike, a congressional study said.” Dozens of news accounts in 2001 reported that an internal CIA review from 1989 found “every major assessment from 1974 to 1986 ‘substantially’ overestimated” the Soviet threat. On Oct. 1, 1991 the Associated Press reported that, “American taxpayers may have wasted tens of billions of dollars arming to confront a Soviet empire that was in a state of decline…”

The New York Review of Books also noted that in 1998 the US Commission to Assess the Ballistic Missile Threat to the United States “warned that Iran and North Korea could hit the US with missiles within five years.” Twenty years later, neither country can do so.

In 2004, a Star Tribune headline noted “No Iraq links to Al-Qaida: 9/11 panel’s report contradicts a US justification for going to war,” while Iraq’s lack of WMD voided the other justification, leading to several more “tens of billions” of tax dollars wasted.

As recently as 2015, Dick Meyer reporting for Newsday chronicled how the threat of terror “is massively exaggerated in both the public and official mind.”

This is crucial, as Rhodes pointed out in Arsenals of Folly, especially with the latest military budget jumping $80 billion over last year’s to $686 billion.