CHICAGO—The Doomsday Clock now shows only “3 minutes to midnight,” according to a January announcement by the Bulletin of the Atomic Scientists Science and Security Board. The group cited “unchecked climate change, global nuclear weapons modernizations and outsized nuclear weapons arsenals” as the reason for moving the clock two minutes closer to catastrophe than they had set it in 2014. 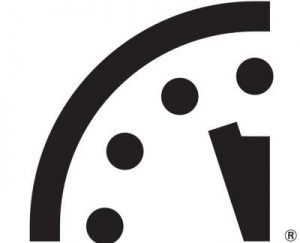 “World leaders have failed to act with the speed or on the scale required to protect citizens from potential catastrophe. These failures of political leadership endanger every person on earth,” the group said. The Science and Security Board has maintained the Doomsday Clock since 1947. Originally designed to give the public a sense of the imminent threat of the global nuclear weapons arsenal, the clock began to include the threat of global climate change in its measurements in 2007.

In its press release, the Science and Security Board wrote, “We implore the political leaders of the world to take coordinated, quick action to drastically reduce global emissions of heat-trapping gases, especially carbon dioxide, and shrink nuclear weapons arsenals. We also implore the citizens of the world to demand action from their leaders. The threat looms over all of humanity. Humanity needs to respond now, while there is still time.”