In a historic move, the UN Open-Ended Working Group (OEWG) on nuclear disarmament recommended that the General Assembly mandate negotiations on a nuclear weapons ban treaty. After 127 states committed to the Humanitarian Pledge adopted by the UN General Assembly on December 15, 2015, the OEWG began meeting and declared the recommendation on August 19, 2016. The ban would be a legally-binding international law imposing “prohibitions against possession, use, development, production, stockpiling and transfer, as well as measures for elimination.” While no one expects the US and other nuclear-armed states to ratify the treaty, the law would increase critical international pressure and severely stigmatize any continued possession or threatened use of the weapons.

Many of the nations that took part in the meetings that led to the recommendation argue that there is a legal gap in international law to reach total elimination of nuclear weapons. While one of the fundamental purposes of the United Nations is nuclear disarmament, little progress has been made by means of the Nuclear Non-Proliferation Treaty, the Comprehensive Test Ban Treaty, or the independent treaties between the US and Russia. The International Campaign to Abolish Nuclear Weapons (ICAN), with partner organizations in 98 countries, has led the civilian push for a treaty ban. The groups believe that endless failure on disarmament is not an option. The International Physicians for the Prevention of Nuclear War said the goal of a ban is “more effective measures to stigmatize, prohibit and eliminate nuclear weapons.”

Reacting to the OEWG’s recommendation Anita E. Friedt, Principal Deputy Assistant Secretary for the State Department’s Bureau of Arms Control, Verification and Compliance, defended what she called “progress” made by the US toward a nuclear-free world. However, current efforts to eliminate nuclear weapons have been led by states with vested interests in retaining them—the nuclear powers and their corporate backers who profit from maintenance of the status quo. This contradiction is demonstrated by the trillion-dollar program proposed by the United States to upgrade its nuclear arsenal over the next 30 years.

Ms. Friedt claimed, “We know that nuclear disarmament can only be achieved through an approach that takes into account the views and the security interests of all states. That is why we reject the final report …[which fails] to take account of the international security environment and will neither lead to the elimination of nuclear weapons nor uphold the principle of undiminished security for all. So, together let us reject division and instead agree that we share a common goal and recommit to the roadmap we are on, one that has proven results.”

If US policy-makers truly took “into account the views and the security interests of all states,” nuclear weapons would have been abolished long ago. 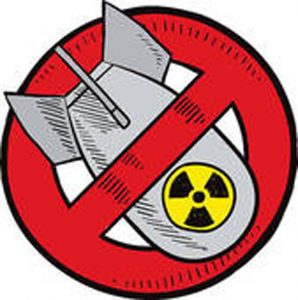 Actual elimination will be slow in coming. Depending on the results of the negotiations, the US and other nuclear-armed states will begin to feel increased global pressure to reduce their arsenals. But even when the US has become party to a weapons ban treaty, it is reluctant to stop its support for the military industry. The Chemical Weapons Convention entered into force in 1997, yet, according to CNN and the Centers for Disease Control, the US possesses 3,000 tons of chemical warfare materiel—roughly three times the amount held by Syria. The Convention on Cluster Munitions went into force in 2010. While the US did not adopt this treaty, as of Sept. 1, 2016 these weapons are no longer being produced here. Criticism over the use of US-made cluster munitions by Saudi Arabia in Yemen, and refusal by international financial institutions to include them in investments, has led Textron Systems to announce that it will stop manufacturing them. Textron’s action shows that the stigmatization advocated by treaty ban proponents does have an impact.

Opposition to a nuclear weapons ban will continue from the weapons industry, nuclear-armed states and those states who consider themselves “protected” by nuclear-armed states. The next step toward the ban treaty is for the First Committee of the UN to issue a mandate in its October meeting to commence negotiations in 2017. If enough public pressure can be brought to bear, an overwhelming majority of UN member states is likely to prevail with a ban that truly “takes into account the views and the security interests of all states.”