Judicial Protection Racket Keeps the Bomb Behind a Wall of Silence 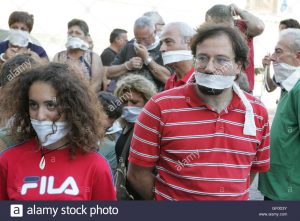 If you were thinking that protest and resistance against the Bomb will be easier in the United States now that the United Nations General Assembly, on July 7, 2017, overwhelmingly approved a treaty outlawing the possession and threatened use of nuclear weapons (voting 122 to 1), think again.

Between 1980 and 2005, seven US Circuit Courts of Appeal have ruled that federal district courts may (in one case must) prevent juries from hearing a defense of necessity or any expert testimony about international treaty law, etc. in nuclear weapons protest cases.[i]

Granting the government’s motion in limine for excluding evidence and testimony about international law, the effects of nuclear weapons, or the nature of the US nuclear arsenal, these US appeals courts have declared that defendants, “should not be excused from the criminal consequences of acts of civil disobedience simply because the acts were allegedly directed at international law violations”[ii] (US v. Allen, 1985). And, even more to the point of the new international Treaty on the Prohibition of Nuclear Weapons, that “Even if it were contrary to international law for a nation to possess nuclear weapons, domestic law could properly and does make it a crime ‘to correct a violation of international law by destroying government property’”[iii] (US v. Urfer and Sprong, 2002). These 15- and 32-year-old decisions appear now to be an attempt to proactively and permanently shield nuclear weapons from legal scrutiny, making them sacrosanct forever on a pedestal above the law.[iv]

After their October 6, 2002 symbolic disarmament action at a Minuteman missile launch site in Colorado,[v] Sr. Ardeth Platte, Sr. Carol Gilbert, and the late Sr. Jackie Hudson, all members of the Dominican Order of Preachers, were convicted of “sabotage” and of “depredation against government property.” Before trial, by court order, the convictions were guaranteed and made inevitable by the trial court’s granting of the government’s motion in limine — turning the courtroom drama into a version of Kabuki dance — that formulaic Japanese stage play involving elaborate costumes, heavy makeup, and a well-known rote ending. Srs. Ardeth, Carol and Jackie were prohibited from presenting evidence (or jury selection questions, jury instructions, or opening or closing statements) regarding the effects of nuclear weapons use or the legal obligations of citizens under international law. The trial court in Denver — evidently having mined every previous nuclear weapons protest case for any available defense — forbade the three nuns from:

The nuns appealed, but in 2005, the 10th US Circuit Court of Appeals, also in Denver, upheld this all-encompassing exclusion of evidence from the jury.

Matthew Lippman, Professor Emeriti of Law at the University of Illinois at Chicago, has argued that, “Civil resisters typically … claim that their criminal act was a justified attempt to halt an ongoing governmental illegality.”[vi] The government is, the resisters assert, “intentionally engaging in illegitimate criminal conduct” — nonchalantly called “deterrence” — which is the ongoing public, terroristic threat to commit massacres.

Most of the trial court orders forbidding “necessity” defenses rely on the Chicago-based 7th Circuit’s 1985 decision in US v. Allen, which asserts, in error some would say, “Although their purpose may have been to uphold international law, their action disobeyed the wholly independent federal law protecting government property.” Although federal law may be independent, it is not superior to or controlling of US treaties which constitute “supreme law” under the US Constitution. The 7th Circuit’s error, or subterfuge, is obvious and egregious in view of five Supreme Court cases in which US treaty law is declared the “supreme” law of the land[vii], and controlling of all the rest.

Prof. Lippman says, “By denying protesters the use of the necessity defense, courts merely are … abdicating their constitutional duty to permit criminal defendants to introduce a defense.” Nowadays, most federal juries are prohibited from learning objective facts from expert witnesses about nuclear weapons — either about their uncontrollable, indiscriminate, and long-term radiological effects, or about what superior/controlling law says regarding individual responsibility for the planning and preparation of massacres. Federal juries only hear what the prosecutor’s military or weapons-building witnesses (so-called “experts”) say in testimony about the Bomb. (Occasionally, federal defendants are allowed to testify about the facts, but their testimony is always dismissed an inexpert, and coming from potential saboteurs or terrorists.) The government witness’s  biased, self-interested testimony and “exhibits” — from the perpetrators of the crime being protested — become the only set of “facts” the jury is allowed to consider.

Because of court orders granting “motions in limine,” federal juries never hear any expert testimony (facts) that contest and even rebut or refute the military’s claims that nuclear weapons are defensive and legal. The reason for excluding these facts is obvious. Ordinary citizens, let alone legal scholars and weapons designers, can easily disprove the nearly axiomatic presumption that nuclear weapons are lawful. Judges at every level of the judiciary all know how easy it is to show that hydrogen bombs are ghastlier and more heinous that all other banned weapons (poison, cluster munitions, land mines, and gas) combined.

This is my personal experience as well. In a simple Minneapolis, Minn. case of trespass against depleted uranium munitions manufacturer Alliant Techsystems, four civilian non-lawyers, myself included, proved to a jury in 2004 that our refusal to leave the company’s premises was an act of justifiable crime-prevention, not criminal trespass. The jury found us not guilty. It is so easy to show that radiological weapons are unlawful — to manufacture, possess or to use — that we established our successful defense of necessity without the help of attorneys.

A legal vacuum into which federal courts allow no air

Binding international treaties in general,[viii] and US Air Force, Navy and Army Field Manuals in particular, all hint at the legality of nuclear weapons by forbidding mass attacks on civilians. In view of the poisonous, indiscriminate, long-term and uncontrollable effects of nuclear weapons, military and international treaty law can be interpreted as having already prohibited them, like other contraband, in a class along with land mines, cluster bombs, biological weapons, and poison gas. Yet federal courts cannot tolerate any airing of these facts — which might prove the Bomb is unlawful — and the “supreme” law can’t be allowed within a jury’s earshot. To protect the bomb from legal scrutiny, federal judges have created a legal vacuum, where the introduction of even the tiniest bit of fresh, treaty air would smash their bubble.

So frightened of this a puff of air are federal courts that even former US Attorney General Ramsey Clark, an expert on treaty law who helped negotiate and steer the US adoption of the Nuclear Non-Proliferation Treaty, was kept away from the jury in the infamous Y-12 nuclear weapons factory protest case of 2012. (The 6th Circuit Appeals Court in Cincinnati did nullify the three convictions in this case, but not because the trial judge excluded evidence friendly to the defendants in error. The convictions were vacated due to gross over-charging by the government which used the Patriot Act’s draconian anti-terrorism language against gray-haired pacifist defendants, Sr. Megan Rice, 81, Michael Walli, 63, and Greg Boertji-Obed, 57.)

The courts are so afraid of any expert identification of the Bomb’s unlawful status that in one fantastic case, after a federal judge in Arizona agreed to hear a necessity defense by nuclear weapons protesters, the 9th US Circuit Court of Appeals in San Francisco rushed in before trial to prevent it. Arizona’s US Attorney filed a complaint against the trial judge, in US v. the Hon. Richard M. Bilby[ix], in which he warned that the defense of necessity would, “divert the focus of the trial,”[x]… “transforming routine criminal prosecutions … [in] to broad-ranging and time-consuming inquiries concerning the wisdom of nuclear … policies…”[xi] Indeed, “If left uncorrected, the … order will … possibly result in the defendants’ acquittal…”[xii] — a frightening prospect indeed, that the 9th Circuit quickly stifled.

Prof. Lippman notes that, “The judiciary, in ruling on necessity, must concede that the harm created by nonviolent protesters is minor when compared to the potential consequences of a nuclear…war…” But the judiciary habitually obeys appeals court precedents and US Attorneys, one of whom has warned that if the necessity defense were allowed in nuclear weapons cases, “the harm to the government … would be substantial.”[xiii]

Of course dozens of lower courts have allowed juries to hear necessity defenses by war resisters, as Lippman has noted, after which juries have returned acquittals. Lippman writes, “In my rather extensive experience, in civil resistance cases in which defendants have been permitted to rely upon the necessity defense, a significant percentage have been acquitted by a jury of their peers.”[xiv] In US v. Ashton, a judge in 1853 ruled that the crew of a faulty ship was justified by necessity to demand that the captain return to port. They were not bound to continue on a voyage that presented a risk to their lives. Lippman found in Ashton a perfect analogy to our dilemma of being involuntarily conscripted into the “ships’ company” of the nuclear weapons flotilla. “[T]he crew,” the judge said, “have a right to resist, and to refuse obedience.”

“It is time,” as the professor says, “to tear down the Berlin Wall that prevents civil resisters from pleading the necessity defense in an attempt to justify their formally criminal conduct — and to open the judicial politburo to the voices of change.”

—John LaForge is the senior staffer at Nukewatch, a nuclear watchdog and antiwar group in Wisconsin. This article was originally published in The Nuclear Resister.

[iv] The in limine tactic of excluding testimony helpful to defendants in political cases was used in prosecuting Tim DeChristopher who mucked up an unlawful timber auction. At trial, the motion in limine prevented the jury from finding out the auction was illegal. See the documentary, “Bidder 70.”

[v] The in limine tactic of excluding testimony helpful to defendants in political cases was used in prosecuting Tim DeChristopher who mucked up an unlawful timber auction. At trial, the motion in limine prevented the jury from finding out the auction was illegal. See the documentary, “Bidder 70.”

[x] Prof. Matthew Lippman, “Towards a Recognition of the Necessity Defense for Political Protesters,” Washington and Lee Law Review, Vol. 48, No. 1, Winter 1991, p. 21.