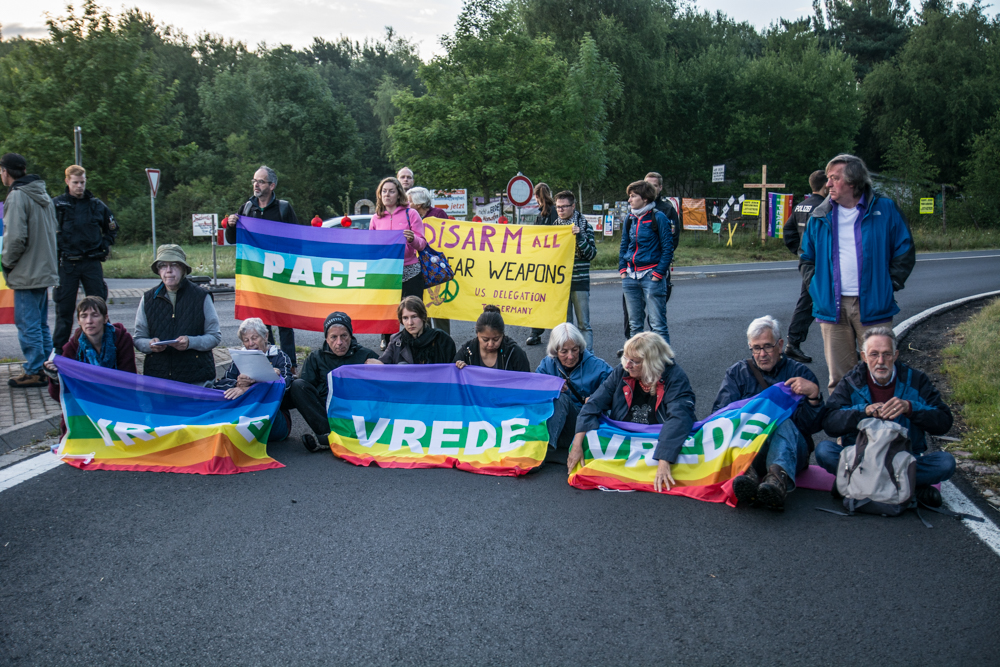 In July, a Nukewatch-organized delegation of US peace activists joined ongoing protests against the deployment of US nuclear weapons in southwest Germany at the Büchel Air Base.
The group joined hundreds of activists from northern Europe that were part of dozens of nonviolent actions that took place between March and August. The efforts forced a reluctant media to take note of US nukes in Germany. News of the protests was widespread and ultimately prodded top politicians and even the current Foreign Minister to call for removal of the US bombs, all in the midst of a national election campaign.
Notable among the 11-person US delegation were seven war resisters who have served a combined total of 36 years in US jails and prisons for protests against nuclear weapons and the war system. After one particularly audacious action by four of the delegates and a German colleague, the German press took up our group’s humorous self-appointed moniker: the “prison gang.”

The delegation, representing seven states and the District of Columbia, also helped put a spotlight on US and NATO plans to replace the current arsenal of B61 H-bombs deployed across Europe with an expensive new version. The new bomb is being touted as the first ever “smart” or precision nuclear weapon and aimed with a new tailfin attachment, making it unprecedented. New nuclear weapons are unlawful under the Nuclear Nonproliferation Treaty which the US and Germany have both ratified.
Ralph Hutchison, coordinator of the Oak Ridge Environmental Peace Alliance in Tennessee—where the thermonuclear core for the new “B61-12” might be manufactured—said about joining the group, “It is important that we show this is a global movement. The resistance to nuclear weapons is not limited to one country.” The new B61-12 program will cost over $12 billion if production is authorized sometime after 2020. “Büchel is scheduled to get new H-bombs. Nothing could be stupider when 90% of Germans want them out and the when the world wants to abolish nuclear weapons,” Hutchison said.
In fact, a March 2016 public opinion poll conducted by International Physicians for the Prevention of Nuclear War (IPPNW), found that 93% of Germans want nuclear weapons banned; 85% agree that US nuclear weapons should be withdrawn from Germany; and 88% said they oppose US plans to replace the current weapons with the new B61-12.
Dubbed “International Week” by Campaign Council organizers in Germany, July 12-18 had over 60 people—from Russia, China, Mexico, Germany, Britain, the US, The Netherlands, France, Belgium and Germany—participate in vigils, trainings, networking, blockades, “go-in” actions, marches, media work, and simply enjoying peace camp. The effort was part of the five-month-long effort—“20 Weeks for 20 Bombs”—launched on March 26, 2017 in conjunction with the start of the final negotiations at the United Nations for the Treaty on the Prohibition of Nuclear Weapons.

US delegation achieved a string of “firsts”

While the US delegation was itself a “first” in Germany’s anti-nuclear campaign, the group chalked up a string of additional firsts during its week of nonviolent actions.

On July 15, Susan Crane, of the Redwood City, California Catholic Worker and I walked through the base’s main gate and talked for 30 minutes with military guards and local police about whether their orders to protect nuclear war planning are lawful. While we were repeatedly ordered to leave, and Susan, a participant in five Plowshares disarmament actions, eventually sat down and had to be carried out, we were neither arrested or charged. “They don’t want to arrest internationals and draw attention to the nuclear weapons,” said long-time disarmament activist and Büchel peace camp organizer Marion Küpker.

On July 16, about 35 activists streamed through the base’s flimsy outer gate and then through a heavy steel inside fence which was mistakenly left unlocked. While two people symbolically brought down the US flag, at least 30 others eagerly traipsed through the open fence, squeezed through another vehicle gate, and then fanned out across the broad entryway to inspect the exclusive surroundings and their gaudy display of retired war planes on pedestals. The Dutch activists, most of them from the Amsterdam Catholic Worker, were as shocked as anyone to be able to place a few dozen loaves of “bread, not bombs” on and around the memorialized “gods of metal.” All the while, Dominican Sisters Carol Gilbert and Ardeth Platte of Baltimore, Maryland, read aloud the text of the new international Treaty on the Prohibition of Nuclear Weapons, and called for the base commander to come and accept a copy of the treaty.
The next day, July 17, during an early-morning blockade of the base by 30 protesters, the sudden appearance of the commander, “Oberstleutnant” Gregor Schlemmer who arrived on foot, thoroughly shocked the group which had locked arms and stretched banners across the road to his base. It is positively unheard of in the United States for high-ranking Air Force officers to meet openly with anti-war activists. Commander Schlemmer looked at ease and appeared to listen intently as Sister Ardeth explained the newly-minted nuclear weapons ban treaty, and then he calmly accepted her copy before leaving.

Later on July 17, after nightfall, a group of five, me included, got deep inside the base, and for the first time in 21 years of protests against the US bombs, we occupied the top of one of the large bunkers potentially used for storing nuclear weapons. (Experts later reported that they are probably kept elsewhere on the base.)
After hiking along shadowy farm roads, shushing through dark rows of corn, clipping through the base’s outer fence, crossing a brightly lit air base road, and tramping noisily through a few wooded brambles, our small group cut through a second chain-link fence. We bumbled past a giant hanger and under the wing of a jet fighter parked in the open, and reached a set of double chain-link fences surrounding four tall, earth-bermed bunkers. After cutting the two non-electrified, unlit fences without tripping a single alarm or even having the lights snap on, the five of us scurried up to the top of the wide-topped, sod-covered concrete Quonset hut. No motion detector or alarm, no Klieg light or guard had noted our intrusion at all. We spent over an hour chatting, star gazing, checking our radiation monitor, and enjoying being flabbergasted that our implausible plan had worked. This was supposedly a severely controlled H-bomb storage depot, but we’ll never know. We didn’t try breaking into it.

Steve Baggarly, 52, of the Norfolk, Virginia Catholic Worker, suggested we label the bunker’s giant metal doors, so he and I scratched “Disarm Now” into the paint and this finally alerted some guards. We hustled back up to the top and we were all soon surrounded by vehicles, moving spot lights, and heavily armed soldiers searching on foot with flashlights. Still unnoticed because of the darkness and our elevation, we decided to announce our presence by singing “Vine & Fig Tree.” This prompted the patrol for the first time to look up. We were detained, and after an hour of being searched, photographed and lectured, Commander Schlemmer, summoned from bed at 2:30 a.m., gathered us for a short lecture. He said what we’d done was “dangerous” and that sneaking onto a military base “isn’t supposed to be fun.” Of course he was unaware that the five people before him had served a combined total of 19 years incarcerated for such actions. All of us—Baggarly, Susan Crane, Bonnie Urfer, Gerd Buentzly, of Herford, Germany, and myself—were released without charges.
News of aging peace activists occupying a nuclear weapons base unnoticed was widely reported in the press. The news moved Green Party Bundestag Deputy Tabea Rössner on Aug. 7 to lambast the “theme park” level of base security. Thanks to Rössner’s high-profile criticism, the head of the Social Democratic Party Martin Schulz unexpectedly called for the ouster of the US weapons, smack in the middle of his national campaign for the Chancellorship. A week later, Foreign Minister Sigmar Gabriel, during a press briefing in Washington, DC, with Secretary of State Rex Tillerson, endorsed Schulz’s call for removing the US nukes. Of course nuclear weapons are the last thing anyone wants to contemplate, so it takes focused inventiveness and a level of personal risk to get the public and the lawmakers to face the Bomb. Sometimes it works.

This summer’s “Twenty Weeks for Twenty Bombs,” made regular headline news thanks to the efforts of the nation-wide Campaign Council “Büchel is Everywhere: Nuclear Weapons-Free Now!” and its international coordinator Marion Küpker of Hamburg. After years of outreach and solidarity work, the five-month peace camp near the gates of Büchel Air Force Base, and its well-known use of nonviolent direct action, was endorsed by all 50 peace groups and organizations in the the Campaign Council which now includes mainstream bodies like International Physicians for the Prevention of Nuclear War, the Fellowship of Reconciliation, International Association of Lawyers against Nuclear Arms, and the DFG-VK, Germany’s oldest anti-war organization.
*The US delegates were Steve Baggarly, Kathy Boylan, Zara Brown, Carmella Cole, Susan Crane, Sr. Carol Gilbert, OP, Ralph Hutchison, John LaForge, Leona Morgan, Sr. Ardeth Platte, OP, and Bonnie Urfer.

See our photo gallery of the US delegation here.