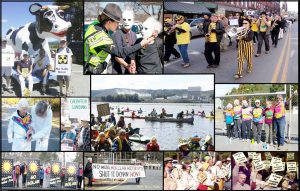 Campaigning for the shut down of the faulty Vermont Yankee reactor, thousands participated in rallies, parades, public hearings, nonviolent sit-ins, lockdowns and blockades. It will close next year. See the story on the back page.

Below: An exterior transformer fire erupted June 18, 2004; and a worker leaked this photo of the famous Aug. 21, 2007 cooling water system collapse.