US armed forces and the CIA may have committed war crimes by torturing detainees in Afghanistan and elsewhere, the International Criminal Court’s (ICC) chief prosecutor says in a preliminary report, raising the possibility that US citizens could be indicted.

“Members of US armed forces appear to have subjected at least 61 detained persons to torture, cruel treatment, outrages upon personal dignity on the territory of Afghanistan between 1 May 2003 and 31 December 2014,” according to the November 14th ICC report issued by Chief Prosecutor Fatou Bensouda’s office in The Hague.

The report says that between December 2002 and March 2008, CIA operatives may have subjected at least 27 detainees at its secret prisons in Afghanistan, Poland, Romania and Lithuania to “torture, cruel treatment, [and] outrages upon personal dignity” including rape. Individuals captured by US forces in Afghanistan were transferred to secret CIA prisons, sometimes referred to as “black sites.” Prisoners were chained to ceilings, “chained to walls and forgotten [one of them for 17 days] froze to death on concrete floors, and were waterboarded until they lost consciousness” according to the 2014 Senate Intelligence Committee Report on the torture program.

On Dec. 9, 2005, the State Department’s deputy spokesman Adam Ereli, said the United States would continue to deny the Red Cross access to prisoners it was holding secretly around the world, claiming they were terrorists who were not guaranteed any rights under the Geneva Conventions. The Red Cross complained that its central purpose is to protect the human rights of prisoners, all of whom deserve protection under international humanitarian law—binding treaty laws that include an absolute, unambiguous prohibition against torture under all circumstances. 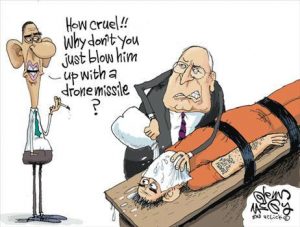 Over 120 countries are members of the ICC, but the US is not. Although the US refused to join the 2002 Rome Statute that created the ICC and established its authority, US military personnel and CIA agents could still face prosecution because their crimes were allegedly committed within Afghanistan, Poland, Romania and Lithuania, all members of the ICC.

The ICC’s jurisdiction can be invoked when allegations of war crimes are not investigated and prosecuted by the home governments of the accused. The Guardian reported that the “ICC is a court of last resort that takes on cases only when other countries are unable or unwilling to prosecute.” Writing in Foreign Policy magazine last October, David Bosco noted, “The [ICC] prosecutor’s office has repeatedly called attention to alleged abuses of detainees by US personnel between 2003 and 2005 that it believes have not been adequately addressed by the United States.”

Bensouda’s report about alleged US war crimes says they, “were not the abuses of a few isolated individuals. Rather, they appear to have been committed as part of approved interrogation techniques in an attempt to extract ‘actionable intelligence’ from detainees. The information available suggests that victims were deliberately subjected to physical and psychological violence, and that crimes were allegedly committed with particular cruelty and in a manner that debased the basic human dignity of the victims.”

Reuters noted that the Senate committee released 500 pages of excerpts from its report which found that torture was committed. Official photographs of the abuse are evidently so incriminating that the military, as recently as February 9, 2016, refused to release 1,800 photos never seen by the public.

The Bush/Cheney administration, which authorized and implemented a torture program in Iraq, Afghanistan, secret sites, and the offshore prison at Guantanamo Bay, was fiercely opposed to the ICC, but Afghanistan, Lithuania, Poland and Romania are all members, giving the court jurisdiction over crimes committed within those territories. In 2002, Bush signed into law the American Servicemembers Protection Act which authorizes the use of military force to liberate any American or citizen of a US-allied country being held by the court.

Both President Bush and Vice President Dick Cheney have boasted in public about waterboarding which was sanctioned, “legalized,” and practiced widely under their command authority. Asked during a televised interview about what he called this “enhanced interrogation technique” Mr. Cheney said, “I’d do it again in a heartbeat.”

During a Republican primary debate Donald Trump said, “I would bring back waterboarding and I’d bring back a hell of a lot worse than waterboarding,” a statement he often repeated. Gen. Michael Hayden, a former director of both the CIA and the NSA, reacted in a televised interview: “If he [Trump] were to order that, once in government, the American armed forces would refuse to act. You are required to not follow an unlawful order. That would be in violation of all the international laws of armed conflict.” President-elect Trump also repeatedly called for targeted assassinations of children and family members of suspected terrorists. Both actions are prohibited by US military service manuals and by international treaty law, crimes ultimately prosecuted by the ICC.