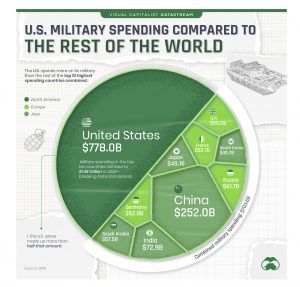 A ceasefire between the warring parties, a Russian withdrawal, a halt to arms shipments, a negotiated peace, and an end to the North Atlantic Treaty Organization. This is what the international left should be organizing around in regard to the Russia-Ukraine war. It shouldn’t be calling for stepped up arms shipments to Ukraine’s military or defending Moscow’s invasion. When this war is stopped, the most likely situation for the vast majority of Ukrainian working people will be one where their greatest enemy could well be the Ukrainian government. Likewise, if the war goes on long enough, the greatest enemy of the vast majority of Russian working people could well be their government. The oligarchs in both nations will still be oligarchs, while the Russian and Ukrainian people will bear the human, financial and other costs of the war.

If the reader thinks the current conflict will somehow end with a different outcome, they need to revisit the history of war, especially war of the modern kind. You know, where civilian populations are bombed, conscripts are forced to kill and die in the thousands; where international bankers make loans to all sides until the battle begins. All the while generals and politicians talk nonsense about the principles being defended as if most of them had any principles that couldn’t be purchased.

It’s becoming clearer to more and more people that this war is truly a proxy war and that Ukrainians are being sacrificed by Washington and its clients (including the government in Kyiv) while Russians are being sacrificed by their government. Neither position — Ukrainian or Russian — is one to be envied. As an acquaintance and Vietnam Veteran Against the War member pointed out on Facebook, this is the perfect war for the U.S.-dominated military-industrial complex. There are no body bags coming home, no anti-war demonstrations, and virtually no pressure to negotiate. Indeed, a substantial part of what usually constitutes the U.S. antiwar movement is actually cheering on the Ukrainian military in this conflict. In short, this is a dream situation and Washington and its minions will fight to the last Ukrainian to keep the war industry’s profits rolling in.

The fears that the war will continue to escalate are genuine. Once again, the rulers of the capitalist world prove that the only thing they can really do effectively is make war. By effectively, I mean these rulers are masters at wreaking havoc, destruction and death. Furthermore, they are once again proving they can convince the bulk of their populations that this is not only a good thing, but also moral and honorable. In this narrative, it is those of us who refuse to accept their wars and their rationales for those wars who are accused of being wrong. Since my first piece published after the Russian invasion of Ukraine, emails have arrived in my mailbox stating that my antiwar stance is criminal. My response is simple — it is not criminal to oppose the crime of war. This isn’t the first war where such accusations have been hurled at those opposed to wars. I consider myself fortunate that this isn’t World War One or Two. Many U.S. opponents of those wars were locked up. Of course, given the censorship of antiwar views by public and private entities across the west and in Russia, who’s to say that won’t occur in the future? Indeed, the U.S. Department of Homeland Security (an Orwellian presence already) recently announced that it was creating a new division called the Disinformation Governance Board. The head of this board will be Nina Jankowicz, who (I quote the DHS press release) “advised the Ukrainian government on strategic communications.” (https://www.hstoday.us/federal-pages/dhs/dhs-standing-up-disinformation-governance-board-led-by-information-warfare-expert/) In other words, Jankowicz advised them on how to write and spread propaganda. She is now taking her scriptwriting to the U.S. public. One assumes she will be working with various manipulators of public opinion in the broadcast, print and social media fields. One can be certain that she will maintain and intensify the stories about Kyiv, Moscow, Washington and NATO already saturating the U.S. and much of Europe. In recent days, I have been accused (along with what one so-called socialist writer dismisses as the “peace and justice” crowd) of supporting war because I am against the escalation of the conflict between Russia and Ukraine and think the politital Left should be organizing a non-aligned international antiwar movement, not joining the cheerleading squad for NATO and its arms shipments.

My response to the charge is simple. To claim that escalating the war will prevent a longer war is just nonsense. It can already be argued that the escalation has already extended it. Very few actual wars end when a war escalates. In fact, escalation usually extends the conflict and the horror that involves. It seems to me that the people who really care about the people under fire are those calling for a ceasefire and negotiations, not those cheering the arms shipments. By rejecting the call that begins this piece, one is rejecting the only internationalist response to this conflict. In rejecting this response, they are accepting a binary choice that means more war, no matter which side one chooses. That choice is one defined by the militaries doing the fighting and the rulers pulling their strings. Making that choice is not making a choice for peace or even the consideration of peace. Plain and simple, it is choosing more war.

Ron Jacobs is the author of Daydream Sunset: Sixties Counterculture in the Seventies published by CounterPunch Books. His latest offering is a pamphlet titled “Capitalism: Is the Problem.” He lives in Vermont and wrote this piece for CounterPunch.