“Rip off the cloak of indifference you have placed on your hearts. Decide—before it is too late!”

“… every individual has to consciously accept responsibility as a member of Western and Christian civilization… Adopt passive resistance, wherever you are, block the functioning of this atheistic war machine before it is too late…”

“The White Rose Foundation not only poses the question ‘What was it like?’ But ‘What does it mean today?’”

I never ever imagined being in the Atrium of Munich University. Yet, there I stood absorbing a palpable silence that filled the spacious hall from its stone floor to its vaulted ceiling. The stillness of early morning was occasionally broken by the cadenced beat of the shoes of passers-by on their way to work. The echoes scarcely interrupted a solemn sense of history pendulous in the room. It was in this grand hall that Sophie and Hans Scholl distributed hundreds of anti-fascist leaflets on the morning of Thursday, Feb. 18, 1943. Sophie scattered her last few from the railing of the uppermost tier and watched them flutter to the center of the atrium floor. Then from a tier below came the cry of a vigilant custodian in the pay of the Gestapo: “You’re under arrest.”

I climbed slowly to the third tier and stood precisely where Sophie did when she set free those last leaflets. Her very last. I was freeze-framed in the moment. Stock still. From the souls of my feet to the center of my skull fear welled up like flames. Time suspended. Then, rapid fire, came the questions: What brought Sophie to this point? Did she really understand the risks? Why so public an act? Did she believe this would awaken the comatose soul of Germany? What was she thinking? Riveted in the moment, I reflected on risks I’ve taken in the name of conscience. While I stood physically where Sophie once did, I’ve never stood anywhere near where Sophie did that morning decades ago. Never. 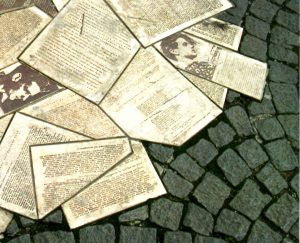 Later in the day my friend Barbara Fredmuller guided me to the Palace of Justice. Here on the morning of Feb. 22, Sophie, her brother Hans and their friend, Christopher Probst were charged with aiding and abetting the enemy and committing acts of high treason. The three were tried, convicted and sentenced to death in secret in a matter of hours. Throughout the proceedings the trio remained calm. At one point Sophie interrupted the judge saying: “Somebody after all, had to make a start. What we wrote and said is also believed by many others. They just don’t dare to express themselves as we did.” Hans warned the judge, “You will soon stand where we stand now!” Before sunset the three were executed in Stadelheim prison. Hans’ last words: “Long live freedom!”

The White Rose, a student-led group of activists, began operating covertly in Munich, the capital city of the Nazi movement, in June of 1942 with the distribution of the first of six leaflets. Origins of the group’s name are somewhat ambiguous.

“The choice of the name White Rose is still obscure although it was obviously intended to represent purity and innocence in the face of evil; it is a poetic or artistic symbol rather than a political one.” (Sophie Scholl and the White Rose, by Dumbach and Newborn, Oneworld Publications, 2007)

The small circle formed around an acute passion to arouse their countrymen and women to action saying: “We will not be silent. We are your bad conscience.” Many in the academic community were simply laying low, trying to wait out the Nazi regime and hoping that the Allies would triumph. The institutional churches largely acquiesced. The conscience of mainstream society was locked down. This is not to say there were not notable acts of resistance. Thousands of Germans were summarily executed for political activism, many of their stories lost to history. Somehow the White Rose gained notoriety, though not immediately. For decades after the war it was taboo to mention them or any resistance groups. Charges against the White Rose were not formally dropped by the German government until the 1980s.

In addition to leaflets, the group painted political statements on public walls by night and encouraged passive resistance, including sabotage. The group’s Third Leaflet said in part, “…sabotage the armament industries, sabotage every assembly, rally, ceremony, and organization sponsored by the National Socialist Party… sabotage every scientific and intellectual field involved in continuing this war—whether it be universities, technical colleges, laboratories, research stations or technical agencies.”

In all, 29 members of the White Rose were convicted of crimes against the state. Thirteen were executed; the rest were sentenced to between one and 10 years in prison.

Seventy-one years have passed since Sophie Scholl scattered her last leaflets in the Atrium. She is gone. Only her bronzed bust and a plaque remain in that august hall. The leaflets were confiscated by the Gestapo. The Third Reich was eventually vanquished. The White Rose participants were martyred.

There is no need for me to tarry any longer in that Atrium. The spirit that animated Sophie and the White Rose has passed beyond there, and I too must move beyond that moment. That spirit is not one to be relegated to history books. The leaflets speak beyond the early 1940s and Nazi Germany. Their voices call out beyond the grave. What in our world today summons conscience, courage, and commitment? Where am I standing today? What am I standing up for, if I’m standing at all?

Sophie’s exhortation echoes more profoundly than the footsteps on the Atrium’s stone floor, even louder than the leaflets themselves. Her summons is as fresh as the sprig of white rose Barbara and I found beside Sophie’s grave: “Stand up for what you believe in even if you are standing alone.”

—John Heid writes Through the Prism of Nonviolence from his home in Tucson’s Mariposa Community. John’s photo below is of tile replications of White Rose leaflets set in Munich University’s walkway.