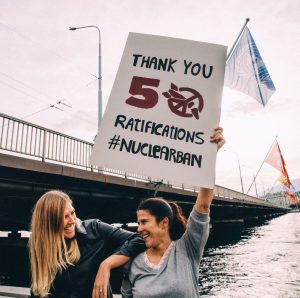 The Treaty on the Prohibition of Nuclear Weapons is about to won its 50th state ratification on Saturday, October 24th, the golden number needed for the treaty to enter into force. The list of 50 signatories can be seen at ICANw.org, website of the International Campaign to Abolish Nuclear Weapons, the 2017 Nobel Peace Prize-winning coalition that helped navigate the treaty.

Formal ratification of the new law — TPNW for short — is a nation’s binding promise “never under any circumstances … develop, test, produce, manufacture, otherwise acquire, possess or stockpile nuclear weapons or other nuclear explosive devices.” The United Nations opened the TPNW for consideration by a vote of 122 to 2 in July 2017.

On January 22, 2021, a mere 90 days after the 50th nation state ratification, the TPNW will enter into force as international law, binding on countries that have seen it ratified.

Now, in a fashion reminiscent of lawless dictatorships the world over, the Trump White House has written to countries that have adopted the treaty urging them to withdraw their ratifications.

According to the Associated Press, which obtained the U.S. letter, the Trump Administration claims that the U.S., Russia, China, Britain and France and all 30 NATO allies “stand unified in our opposition to the potential repercussions” of the treaty.

The AP reported that Beatrice Fihn, executive director of ICAN, said several diplomatic sources had confirmed to her that they and other states that ratified the TPNW had been sent letters by the U.S. requesting their withdrawal.

Fihn told the AP that the “increasing nervousness, and maybe straightforward panic, with some of the nuclear-armed states and particularly the Trump administration,” shows that they “really seem to understand that this is a reality: Nuclear weapons are going to be banned under international law soon.”

So, while the US and the other nuclear-armed countries have opposed the ban treaty, they do recognize the stigma of violating a civilized prohibition that is coming into force. Like a drug cartel with the terroristic muscle and political connections to operate outside the law, the White House wants to pressure its lesser associates.

The absurdity of the White House letter is flabbergasting. It’s like imagining that President Lincoln had urged countries to reinstate slavery.

Ray Acheson, director of the Women’s International League for Peace and Freedom disarmament program, said in a tweet: “It’s incredible that a nuclear-armed state is demanding other countries withdraw from a treaty banning nuclear weapons.”

Back on March 27, 2017 when negotiations for the treaty ban began, Governor Nikki Haley, then US Ambassador to the UN, led a 40-state boycott of the proceedings. Speaking at the UN, Haley made two verbal slips that spoke the truth.

Haley said, “We would love to have a ban on nuclear treat….” She caught herself and said “weapons” instead of “treaties.”

Later, Haley flubbed her claim that: “… one day we will hope that we are standing here saying, ‘We no longer need nuclear weapons.'”

An earlier version of this article was published at Counterpunch.org on October 23, 2020.