Despite the increasingly dire economic and environmental outlook for nuclear power, the Republican-controlled Wisconsin legislature decided this spring that energy companies should be able to build new reactors in the state without waiting for a place to put all the high-level radioactive waste they produce, or a guarantee that the cost would be advantageous to electric ratepayers.

Assembly Bill 384, signed into law by Governor Walker on April 6, repealed the state’s 1983 statute prohibiting new reactor construction until an operational federal storage facility opened to deal with the waste fuel that has been piling up in temporary storage outside of reactors for decades. No viable high-level waste site has yet been identified. During the 33 years the statutory pre-conditions were in place, two of the state’s four power reactors shut down—one of them, at Kewaunee, closed for purely economic reasons in 2013. The other, the La Crosse Boiling Water Reactor near Genoa, also a financial failure, closed in 1987. 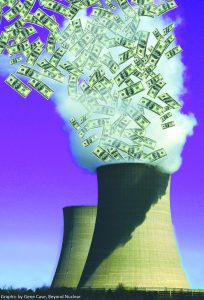 Since 1983, reactor meltdowns at Chernobyl and Fukushima have spread radioactive contamination and grave concern across the globe. The volume of high-level radioactive waste fuel stored indefinitely on the shores of Lake Michigan continues to grow at Wisconsin’s operating Point Beach reactors. Despite massive, ongoing government subsidies, nuclear power has become less and less economically viable; old reactors are closing, and new reactor projects are running years behind schedule and billions of dollars over budget—or being scrapped altogether.

Essentially, the answer boils down to this: because the Nuclear Energy Institute (NEI) demanded it. NEI—the “propaganda wing and trade group for the American nuclear industry, [which] spends millions of dollars annually to engineer public opinion,” as Dr. Helen Caldicott wrote in her 2006 book Nuclear Power is Not the Answer—unabashedly takes credit for a state-level “victory” that its leaders view as a model for future lobbying efforts.

“The passage of the bill is a testament to the power of coalitions and grassroots advocacy and will serve as a model for how pro-nuclear advocates drive policy outcomes in the future,” NEI’s manager of state and federal advocacy, Jon Breed, wrote in an April 13 blog post. He went on to explain that rather than focusing on “shoe-leather lobbying,” to change policy in today’s political climate, the industry needed to “formulate a deliberate and comprehensive plan that would best leverage the power of grassroots advocacy.” This meant dedicating its substantial resources to making it worthwhile for other special interest groups—“unions, business coalitions, student groups, academics, small businesses, environmentalists, and electric industry experts”—to advocate on its behalf, rather than just lobbying the politicians itself.

To spearhead these efforts, NEI purchased its own local, pro-nuclear “environmentalist”—Frank Jablonski, a Madison lawyer and former general counsel for Wisconsin’s Environmental Decade. (Now called Clean Wisconsin, the group advocates renewable energy and efficiency measures.) Jablonski played the role of reformed, pro-nuclear environmentalist when he testified in legislative hearings. Perhaps his change of heart was influenced by the promise of six-figure compensation. Jablonski and his law firm, Progressive Law Group, received more than $110,000 for lobbying work from NEI from 2009 through 2015. NEI’s total lobbying expenditures in the state during that same period, as reported to the Wisconsin Government Accountability Board, amounted to $174,269—this does not include the amounts paid to Jablonski or other expenditures made during the heat of the debate on the recently passed legislation during January, February, and March (those numbers will be reported after June 30).

Is $175,000 really all it takes to buy a state law? Probably not. Besides being more politically effective, NEI’s new coalition-building strategy also makes its policy investments difficult to track. For example, in 2013 the Center for Public Integrity exposed a $10,000 donation that NEI made to the American Legislative Exchange Council (ALEC), the radical right-wing group with which many Wisconsin Republican legislators are publicly affiliated. NEI’s spokesperson said at the time that the donation (ALEC is a registered “charity”) was meant to “increase awareness of energy and environmental considerations among state and local” officials.

According to NEI’s Jon Breed, the repeal in Wisconsin will help inform the group’s efforts to change legislation in other states. The National Conference of State Legislatures lists 15 states as having some kind of restriction on new nuclear power construction; they are California, Connecticut, Hawaii, Illinois, Kentucky, Maine, Massachusetts, Minnesota, Montana, New Jersey, New York, Oregon, Rhode Island, Vermont, and West Virginia.

NEI also pushes the industry’s agenda at the federal level. In 2015, the 501(c)(6) nonprofit organization (meaning it pays no federal taxes, but member dues are not tax deductible) reported $2.345 million in federal lobbying expenditures, mostly focused on influencing members of the House and Senate as well as the Department of Energy and the Nuclear Regulatory Commission, according to the Center for Responsive Politics. NEI’s 2015 financial report breaks down its $53.2 million annual budget by program goals; two of these, “Regulation” and “Policy and Building Public and Political Support,” account for well over half its expenditures—after operating expenses.

Ordinary citizens and electricity ratepayers, like those represented by the Citizens Utility Board of Wisconsin, which opposed the repeal of what it called “Wisconsin’s Nuclear Ratepayer Protection Law,” are largely opposed to new reactor construction. But NEI’s membership—those paying the dues that make up its $53 million budget—includes a large number of publicly funded institutions and ratepayer-owned cooperative utilities. The head of the University of Tennessee’s Nuclear Engineering Department sits on NEI’s board of directors next to representatives of corporate nuclear giants like Westinghouse, Exelon, and Holtec, along with trade union leaders. Dairyland Power, a wholesale energy distribution and transmission cooperative serving rural Wisconsin, is an NEI member—so are the University of Wisconsin, Madison Area Technical College, the Harvard School of Public Health, and more than 100 other publicly and privately funded community colleges, technical schools, and universities. International membership includes the Tokyo Electric Power Company (owners of the destroyed Fukushima reactors that continue to spew radiation into the air and the Pacific Ocean).

As member/owners and ratepayers of one of the rural co-ops in Dairyland Power’s web, Nukewatch and most rural residents in our region are roped into the NEI sphere. (Though we’re hooked to the grid, the bulk of our office and community electricity comes from our own 10,000-watt photovoltaic panel array.)

Grassroots efforts to counter NEI’s powerful public policy agenda need to be highly organized, if not well-funded. Perhaps one strategy would be to push public institutions and member-owned cooperatives to withdraw their support from the organization that keeps taxpayer-funded life support flowing to a dying, destructive industry.