Last year was the best yet for wind power in the United States. According to the American Wind Energy Association (AWEA), 13,000 megawatts of wind energy capacity were installed in 2012, a number that represents a 10-fold increase since 2003 and the largest share (42%) of total new electric production capability nationwide. At 60 gigawatts in cumulative capacity, the country’s 45,000 wind turbines can now power 14.7 million homes, matching the output volume of 14 nuclear reactors. Now more than ever, wind energy poses a tangible threat to the nuclear power industry.

When turbines are producing at high capacity and demand is low, wind energy can “flood” the market, causing wholesale electricity prices to drop below zero. This means power companies with nuclear facilities in high-wind areas are sometimes forced to pay customers to take their electricity, and they’re not happy about it. Christopher Crane, CEO of Chicago-based Exelon Corp., has voiced several recent complaints about policies that promote wind energy production. In a phone interview for a March Bloomberg article, he asserted that if this trend continues “there is a very high probability that existing safe, reliable nuclear [reactors] will no longer be competitive and will have to be retired early.” 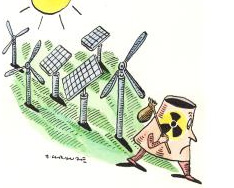 It is true that policy shifts have helped promote wind energy in two important ways: a recently renewed federal tax credit provides wind farms with $22 per megawatt-hour generated, and many states have renewable portfolio standards requiring utilities to purchase certain levels of wind energy. Thus, even when prices are at or below zero, wind energy production can remain profitable, and wind farms keep their turbines running. This puts nuclear and coal-powered systems at a direct disadvantage, because they cannot easily adjust their electricity output to follow a fluctuating market.

Wind Competes on a Fraction of Nuclear’s Subsidies

Despite the arguments of executives like Crane, the fact is that government subsidies currently benefitting wind energy pale in comparison to those enjoyed for decades by nuclear power companies. In the Summer 2012 Quarterly, Nukewatch reported that “over the period of time renewables have been subsidized, they’ve received about $395 million per year compared to nukes which have been supported for a much longer period and have averaged $3.3 billion per year.” These subsidies come in the form of insurance and loan guarantees, research and development funding, and the costs of regulation — not to mention the assumption of responsibility for the long-term storage of a vast and increasing amount of radioactive waste. The AWEA itself, in a December 2012 letter lobbying for the extension of the wind energy tax credit, recommends that the credit be reduced by 10% every year over the next five years, noting that even a minimally viable wind industry would be able to compete on its own by the end of 2018.

The recent pressure from wind is only the latest challenge to a nuclear power industry that is failing to maintain its façade of economic viability. Despite heavy subsidies, 28 nuclear facilities in the US closed between 1963 and 1998 — because they were not cost-competitive — and the future looks bleak for new reactors as well. In a recent piece for the Bulletin of the Atomic Scientists, Amory Lovins asserts that the

production cost of power from new reactors would range from $110 to $342 per megawatt-hour. When compared with downward-trending renewable energy costs — with wind currently between $25 and $40 per megawatt hour and solar photovoltaic averaging $86 per megawatt-hour — and 2011 wholesale electricity prices averaging $36 per megawatt-hour, new nuclear installations face an obvious economic disadvantage.

The question, then, is: How long will the country’s 102 operating nuclear reactors continue their legacy of environmental contamination, radioactive waste production, and deadly accidents before nuclear power as we know it is phased out? And the answer, in part, depends on the state of the electric grid.

“Baseload” Concept is Obsolete with Renewables

Nuclear proponents often argue that renewable power sources such as wind and solar are not viable at large scales because their production is intermittent — they only produce when the sun shines or the wind blows. Coal and nuclear power, on the other hand, were selected for their ability to serve as constant “baseload” generators, mostly running at 70-90% capacity and taking an average of one to three days to start up and often longer to shut down. As evidenced by the recent negative pricing phenomenon faced by Exelon and others in the nuclear industry, baseload power sources and “intermittent” renewables have been shown to actually be incompatible when tied to the same grid. Thus, the expansion of renewable energy will inevitably lead to the phasing out of inflexible coal and nuclear power stations.

The US electric grid as we know it developed in a somewhat ad-hoc manner; as population demand grew, new lines and generators were added to existing infrastructure. The grid includes both publicly and privately owned utilities; some are regulated by a variety of agencies with overlapping jurisdictions, while others are barely regulated at all. The generally centralized and minimally technological manner in

which the current grid operates allows for outages that cost the US economy about $150 billion every year, like the August 2003 blackout where one overloaded transmission line in Ohio disrupted power distribution across Ontario, the Northeast and the Midwest. According to Lovins, almost all of the aging US grid will need to be replaced by 2050, at a cost of about $6 trillion. With the right design, Lovins argues, this grid overhaul could allow renewables to almost completely replace coal and nuclear power.

The 2011 study “Reinventing Fire” by Lovins and the Rocky Mountain Institute proposes a creative “Transform” scenario in which at least 80% integration of renewable energy with the grid can be achieved by 2050. In this model, the grid would need to be flexible enough to include “demand response (which unobtrusively shifts loads off-peak, partly via ice-storage air conditioning and smart charging of electric vehicles), electric energy storage (more than one-third of it distributed in vehicles), increased and optimized transmission and interconnection capacity, and better coordination of regional electricity supply and demand …”

Even within the grid infrastructure already in place, existing management strategies and technologies could allow for a much greater integration of renewables. For example, the ISO (Independent System Operator) that serves much of Texas achieved a rate of 24% of its power from wind generation in March 2012 with a modeling tool that utilizes real-time weather conditions to help technicians match supply and demand more easily. According to findings from the National Renewable Energy Laboratory, adopting tools like this nationwide would enable the US to generate over one third of its power from renewables.

Another Energy Future is Possible

In a grid primarily supplied by solar and wind power, any “back-up” energy sources would need to be able to quickly be turned on and off, a scenario which highly favors natural gas as a fuel source over coal and nuclear. With the right management strategies, however, fossil fuel sources would hardly be needed at all. A 2012 study from the University of Delaware compared historical electricity usage data for the PJM Interconnection region (see map below left) and weather patterns from 1999-2002 with scenarios combining wind and photovoltaic solar energy production with up to 72 hours of hydrogen-based storage capacity. They found that if enough wind and photovoltaic generators and storage capacity had been in place during the four years studied, back-up natural gas generators would only have been needed five times during summer months. As illustrated in the graph (left), the renewable-powered grid could have met 99.9 percent of US electricity needs at a cost estimated to be competitive with current (unsubsidized) electricity prices by 2030.

The shift away from large centralized coal and nuclear power, and toward more flexible, renewable and distributed power sources, is well underway, and the nuclear power industry clearly sees the writing on the wall. Their latest innovation, called a “small modular reactor,” or SMR, is an obvious attempt to retain a foothold within a rapidly changing energy field. SMRs could be produced in a factory and transported on a truck, and they are being designed with the ability to change their power output rapidly. The US Energy Department is currently committed to funding up to half the development cost of two SMR models, and the Tennessee Valley Authority has commissioned two SMRs for its Oak Ridge facility.

Though SMRs represent a potential lifeline for the dying nuclear power industry, their economic viability has yet to be proven. Certainly, only a heavily subsidized prototype reactor could possibly compete with renewable energy sources that operate without fuel costs, major safety concerns, waste issues, or greenhouse gas emissions.